Sometimes we learn of parts that exist that we didn't know about.  Pretty much what happened to me yesterday that ended up making the Atlas V 551 SO much better.  However a problem crops up that the piece that would make it awesome is only available in bright orange.  Which leads to a problem.  What to do?  I did find some other pieces that could work but are just plain ugly.  I could paint the piece, dye it?  Etc.  Included some pic comparisons.  The new parts also make the Atlas V almost the right size!

One thing that has burned a hole in my brain is how to display the probes.  I cooked up this idea.  I would like some feed back.  Idea is to put the probes in a space like enviroment with stars.  Top row of planets (Pluto is a planet) to represent where the probes are/had been.  Recommendations on color of planets would be nice.  Trying to keep it simple.  Or do people would like something simpler like a display for each probe. 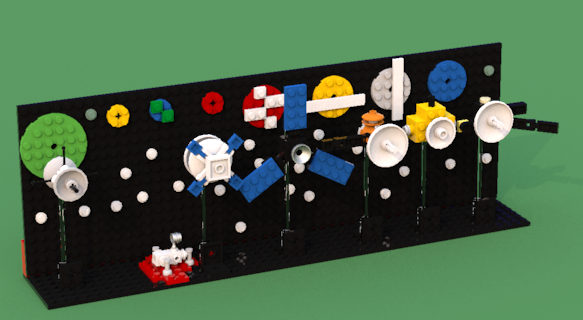 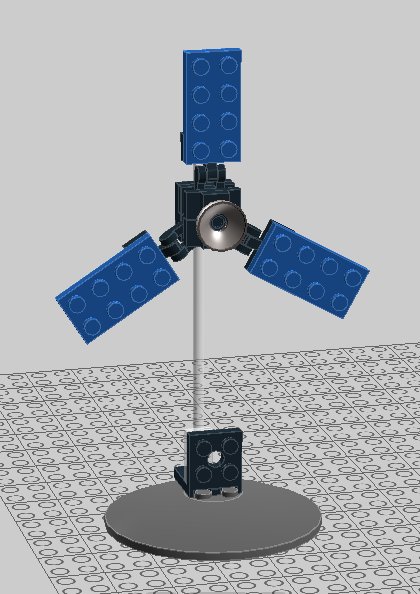 Just following the tail of my Titan IVB instructions is the probe that goes in it.  The hygens probe is designed to detach from cassini and how is in the instructions.  Fitting it in the Titan IVB shroud is just a matter of angles and should go in no problem. 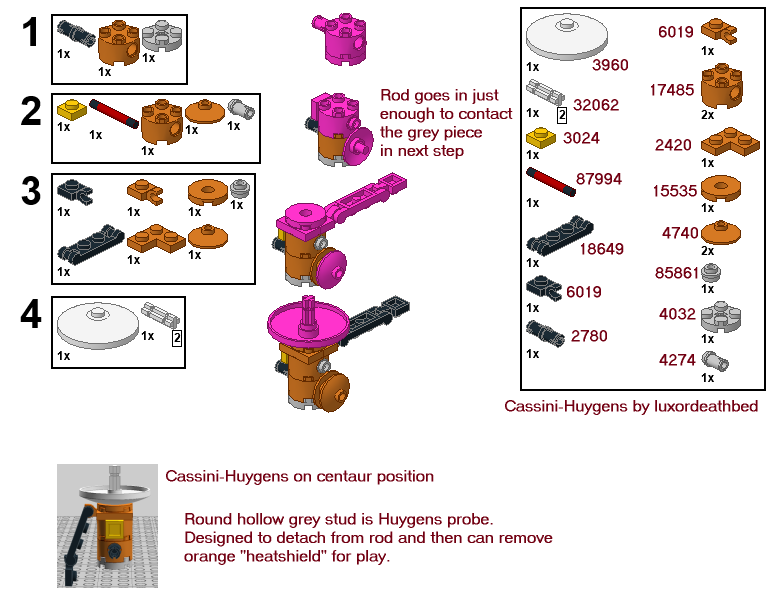 The Titan IVB is at a point where I feel I can release the instructions.  The only thing I got to say is that it is weak at certain areas.  It is long and gravity will win no matter what I could come up with.  In comparison to to the Titan IIIE, the IIIE is a mack truck.  The only weak point I can point to is the 1x1 round studs in the middle.  To separate the SRBS, I highly suggest doing so at the pins.  For the 1st and 2nd stage separation, I suggest holding the white area above the white round studs and tilting the upper stage at the bottom.  The last pointer I got is that cassini-huygens will fit in the shroud with magtrometer folded and oriented towards the side.  Cassini-Huygens probe will be released soon as it goes in this rocket. 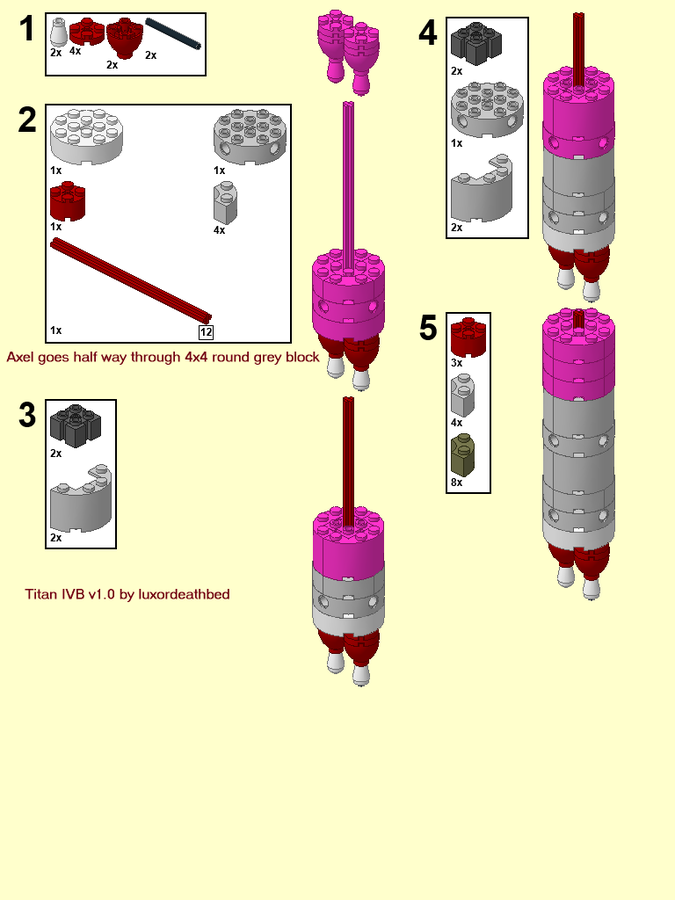 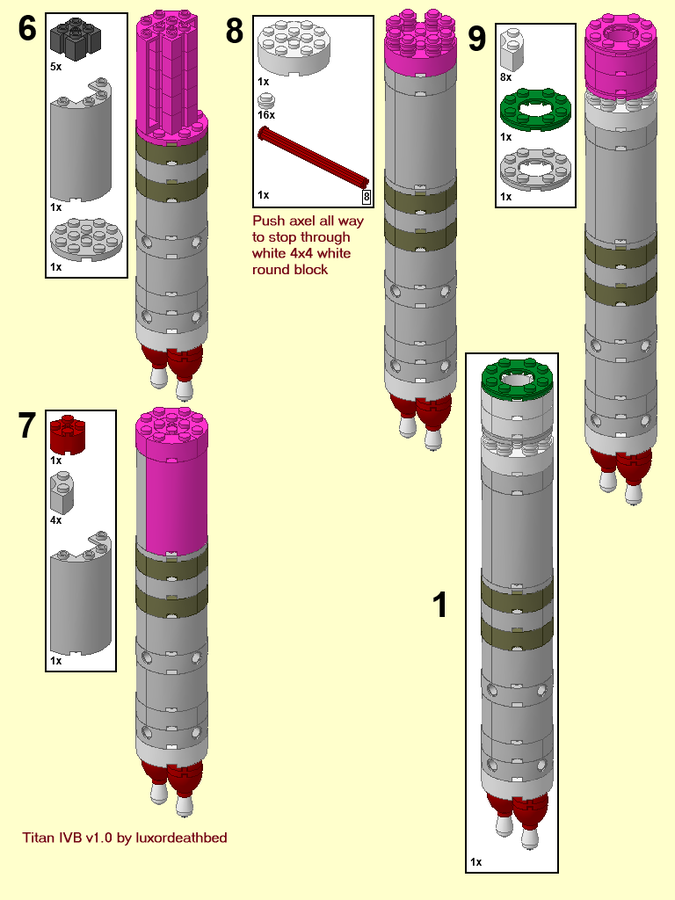 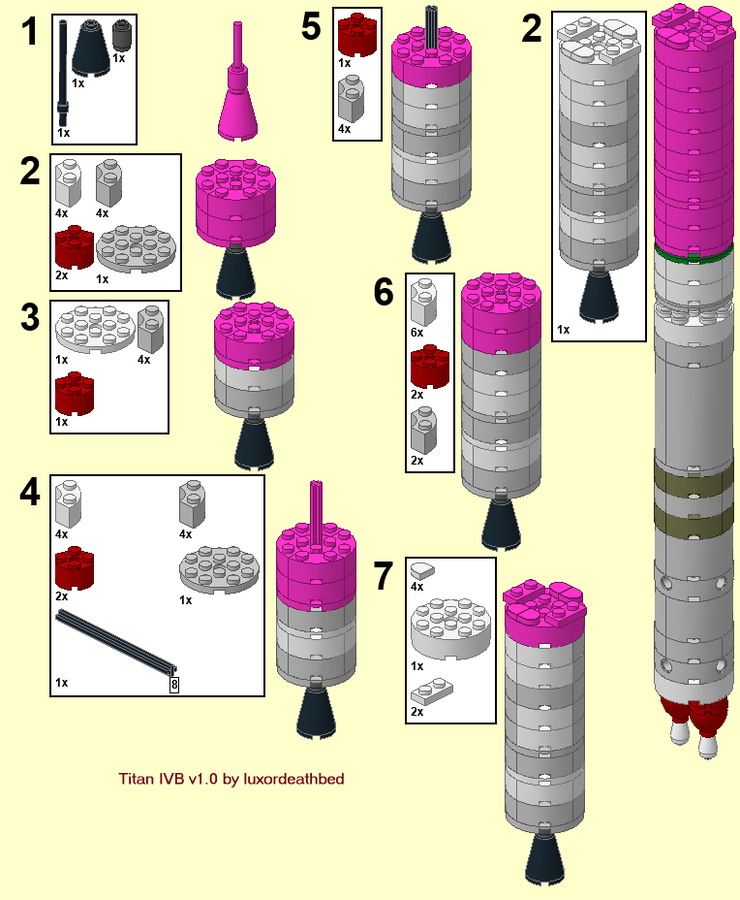 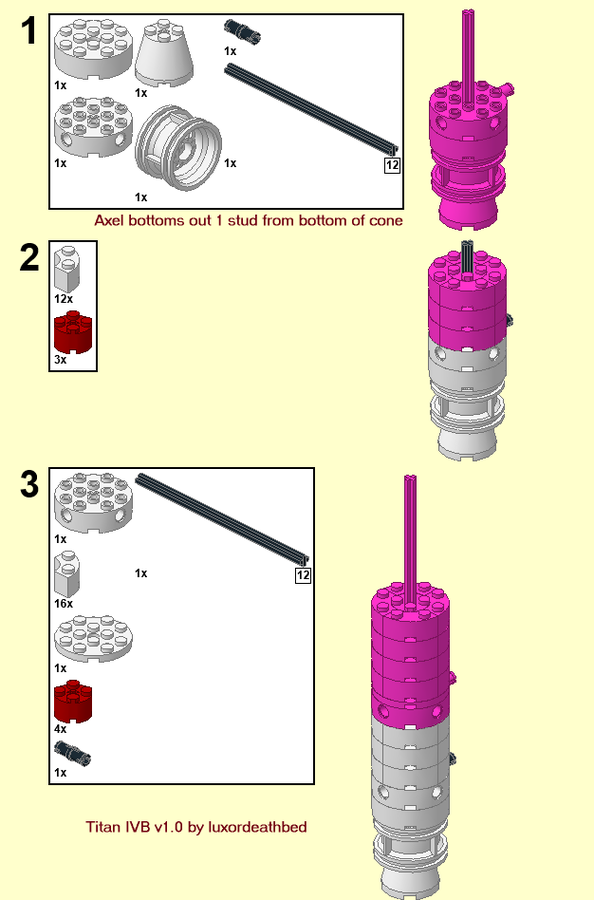 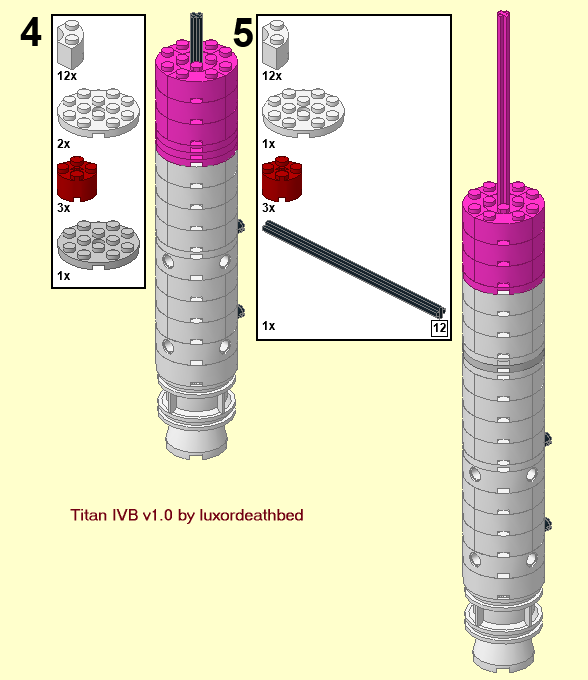 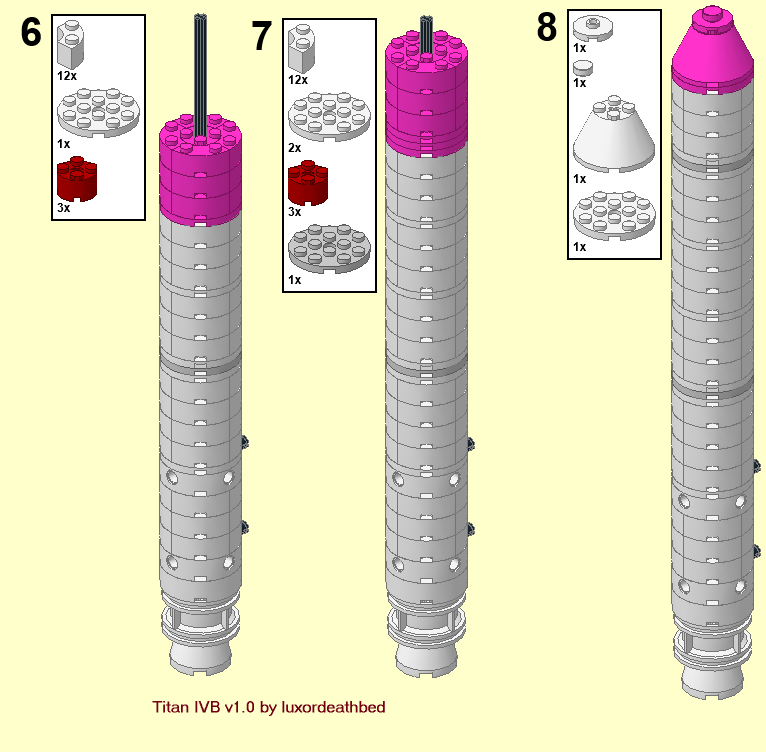 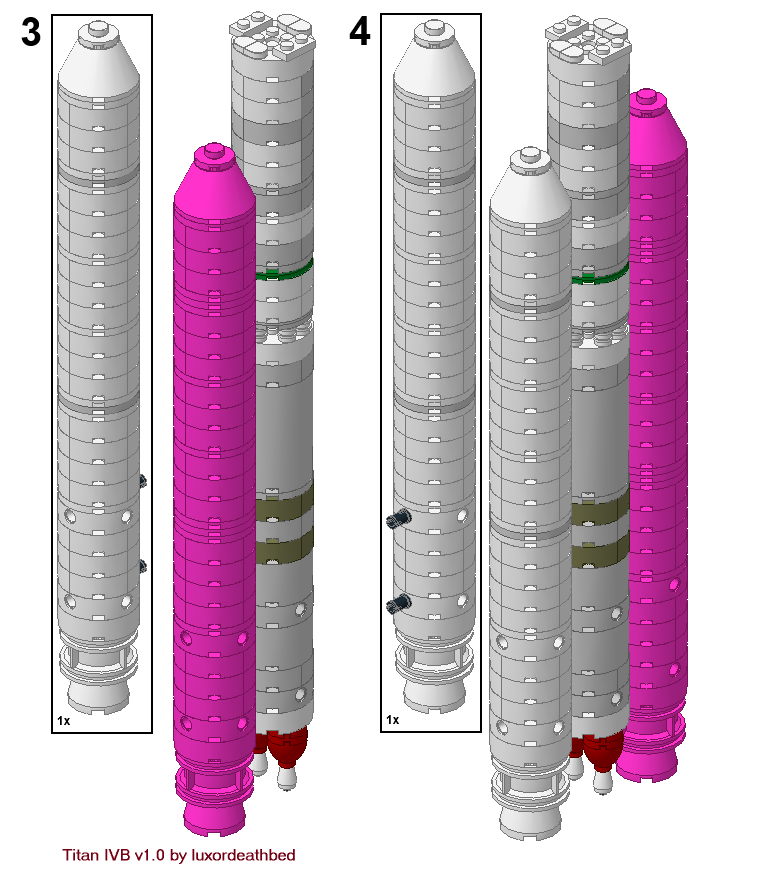 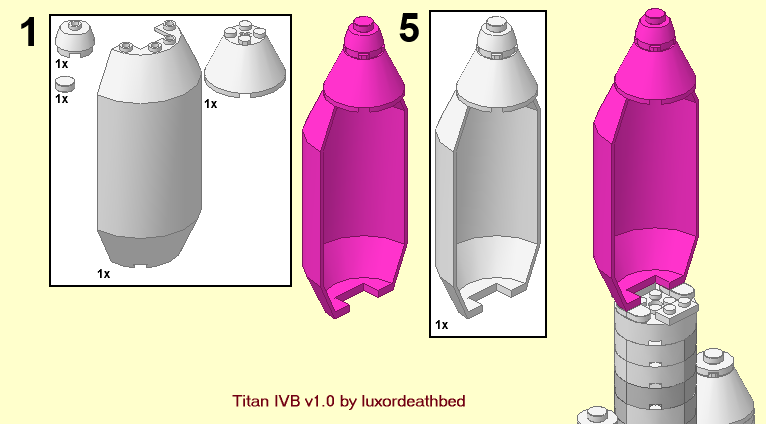 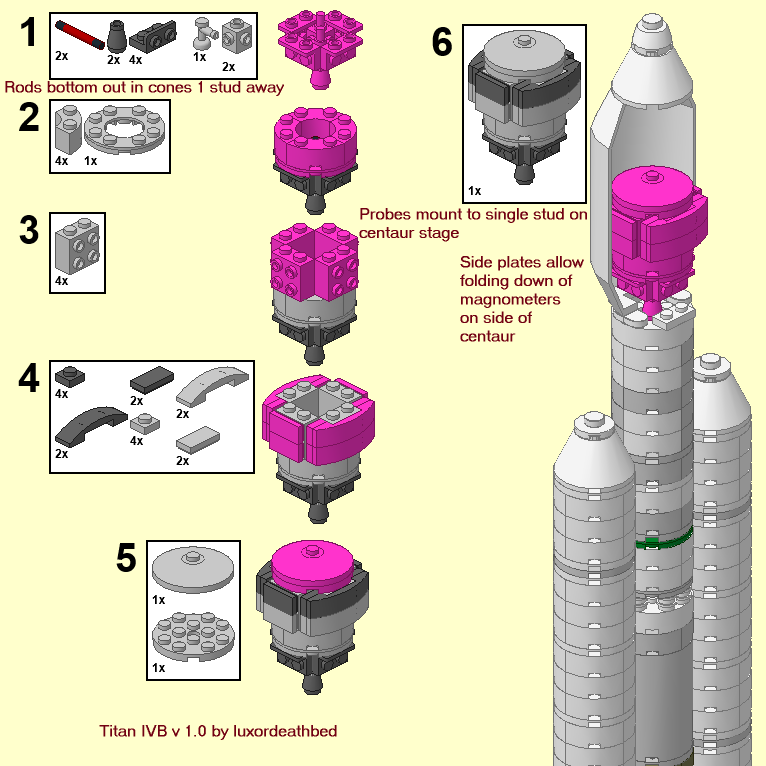 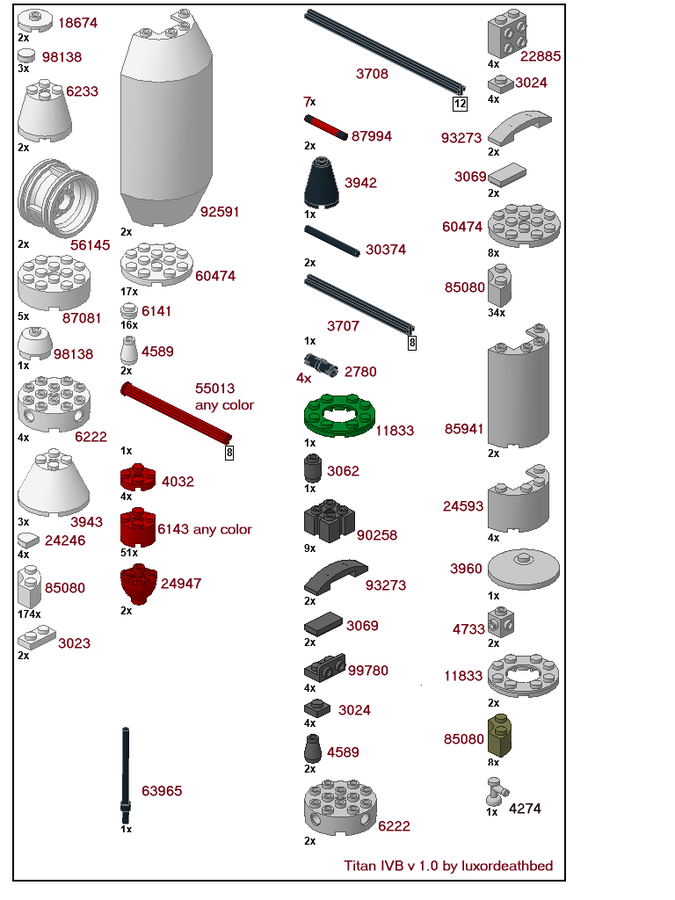 We have lift off of my second lego project.  Lots of discussion and ideas floated here about it and now they are converging over there.  I will try to keep all talk over there about it and talk about the rockets here.  Going to be weird.  Instructions are planned to be released for it to.

Well then.  100 support it is.  In retrospect, lots of things learned here.  On lego and how the support system works.  My next step is to put out the launch pad on another project and keep the rockets rolling here.  The launch pad will be able to accomidate the Titan IIIE, Titan IVB, and Eiffleman's Titan IIIC (look under his updates for mercury/gemini rockets).  Due to this, I will be regarding it as a collabrative project since it crosses lines of design on the rockets.  Also the two trains that we both designed but differently are a factor in this too.  See you on the launch pad 41.

Pictured is the prototype for the Atlas V 551.  I am debating on black friction pins or stud pins to attach the SRBs.  So far the SRBs actually break easily due to no axel reinforcement where they connect to the center stage.  I am leaning towards stud pins at this point.  The size isn't to bad.  It needs to be way taller, but that is the shroud area and so would look ridiculous.  I am waiting for one more order to roll in to get the right axels to strengthen the center stage so there is still a wait game.

On another note regarding the launch tower.  The same order with the axels has the parts for it.  So still a waiting game.  With only 4 supports/6 days to go it will be close.  I intend to launch a separate ideas project for the launch tower due to this one getting cluttered.  If I don't make the 100, I will probably roll the work here into that one.  Stay tuned. 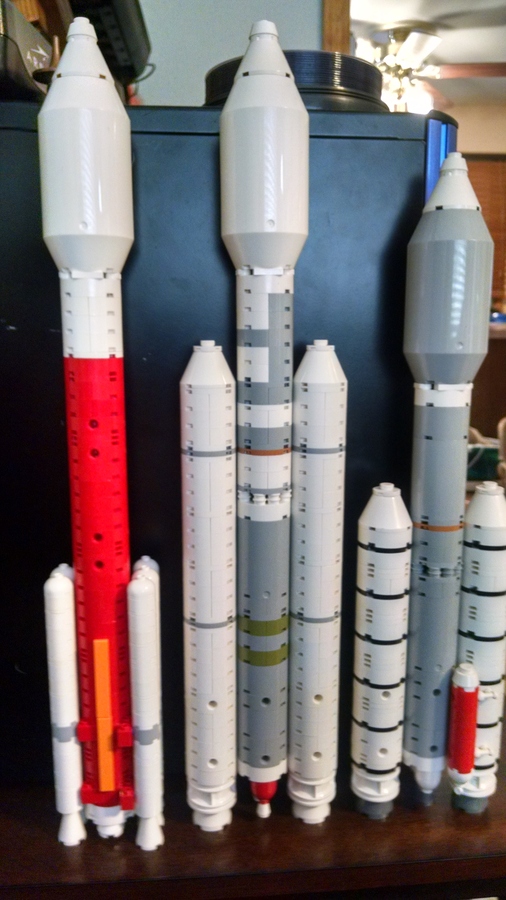 Orders have rolled in and I have completed the Titan IVB prototype.  Already worked out most of the structural integrity issues, but finding that longer rockets are just very dangerous to hold horizontally.  The main weak point is the 16 round stud area in the middle.  Nothing can be done to rectify that unless I replace the studs and try different bricks that are new/used.  I also need to order a very small number of parts to replace the wrong colored ones.  Not going to list them, but anyone paying attention will see them.

Also mocked up the centaur T and it works.  Pictured second with cassini/huygens on it.  Worked out rather well. 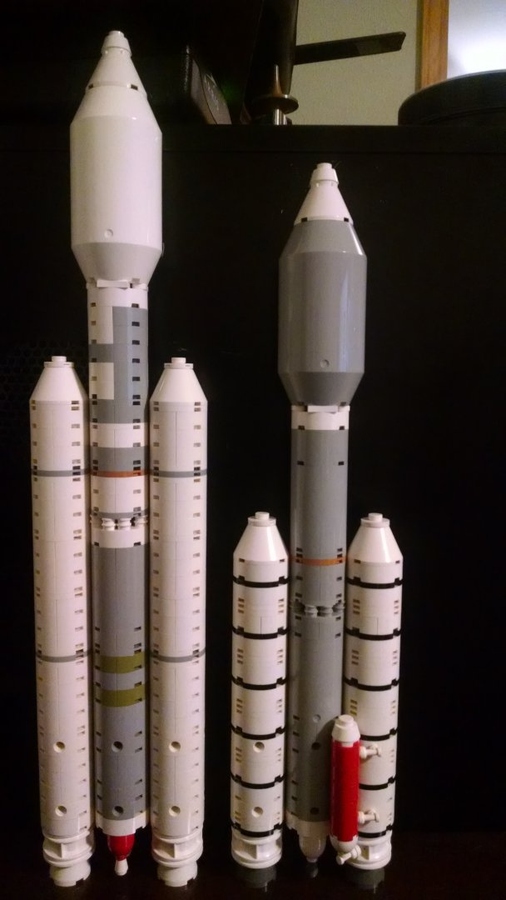 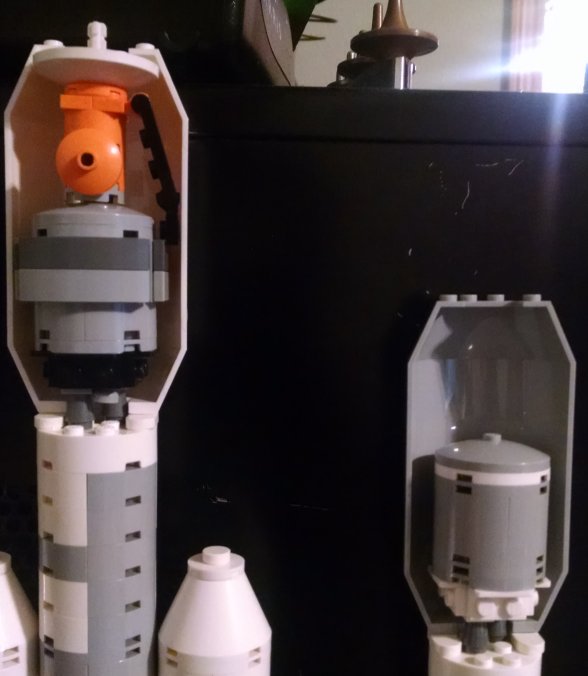 I completed the Atlas V 551 rocket in ldd.  There were some sacrifices and allowances for things I would rather not have liked.  First the model falls WAY short of what the true rocket's size.  You can see from the picture.  Reason for this is the shroud is so huge on this rocket and lego doesn't have the right parts to pull it off.  Second is the positioning of the 5 srbs.  I had to use off set technic bricks to get them attached.  Any ways of keeping them close to each other on the sizes wasn't possible unless someone has a suggestion.  Third, the fuel lines should be pushed more to the side with 2 srbs, but had to center for contructon.  Fourth, I am slighlty color blind, so trying to identify the colors for fuel lins in this picture has been problematic and trying to find existing parts:

If you have a suggested color and fits into a 1x8 flat tile, comment.  The shorter fuel line on the other side uses 1x6 tiles.

I consider this the final version and most accurate at this point for the Titan IIIE.  There are parts that don't exist in the right color to make it look better, so this will make due.  If you want my thoughts on other alternate parts to use, see my version 1.0 update a few pages ago.  Thanks for your patience. 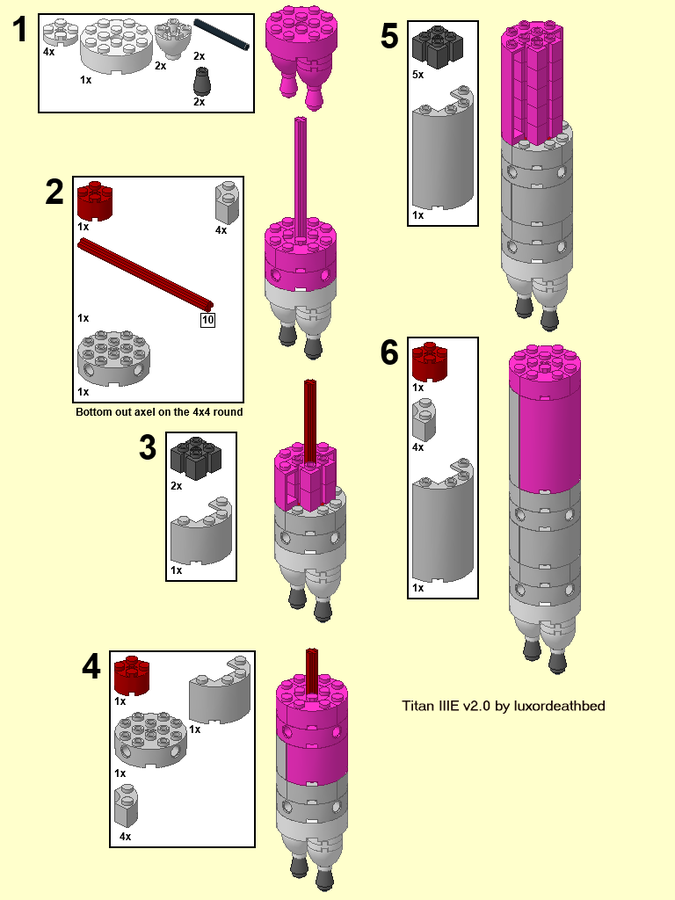 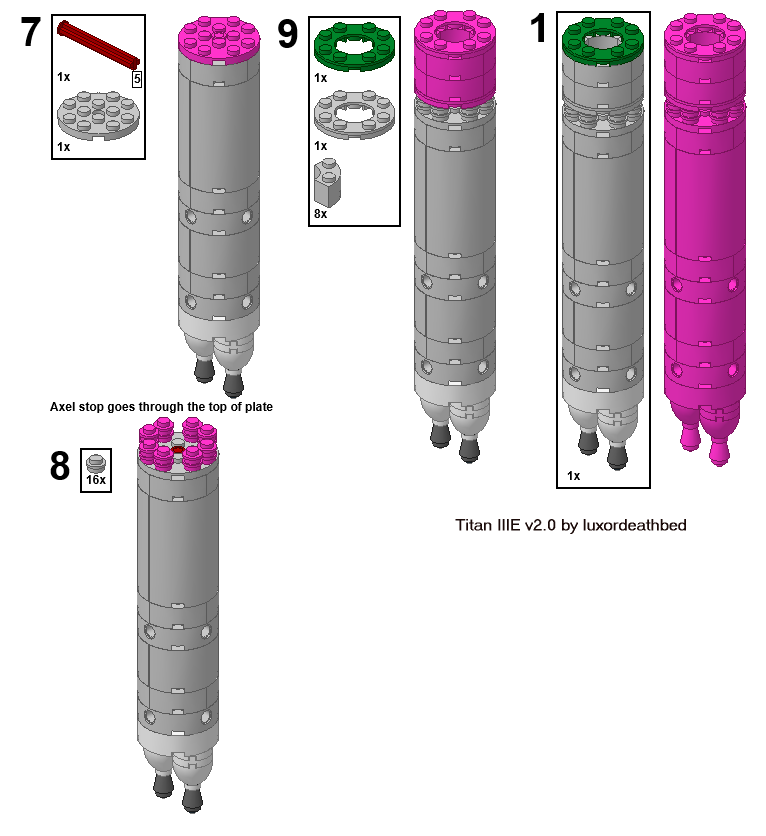 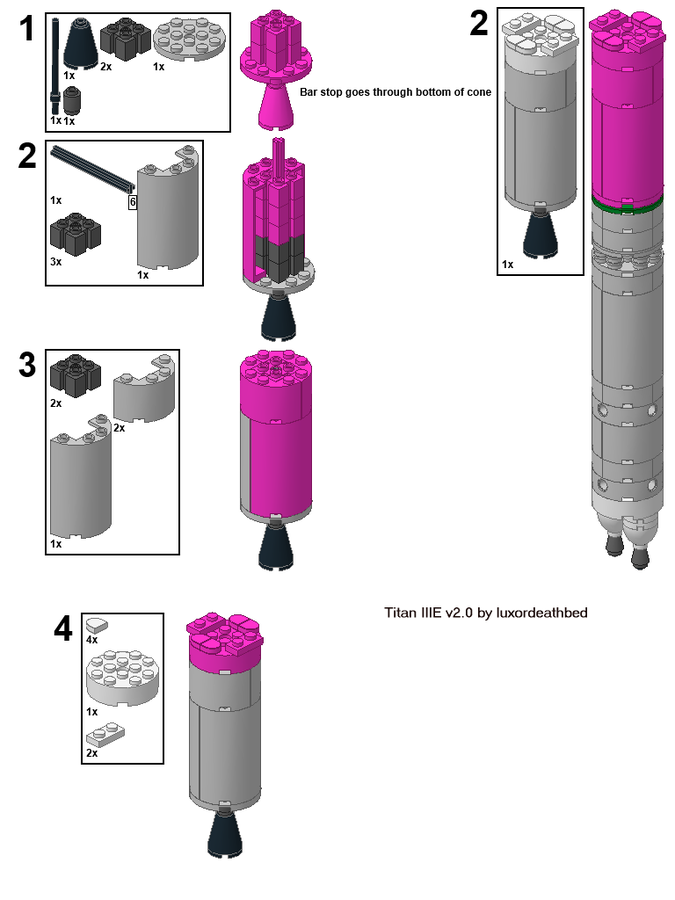 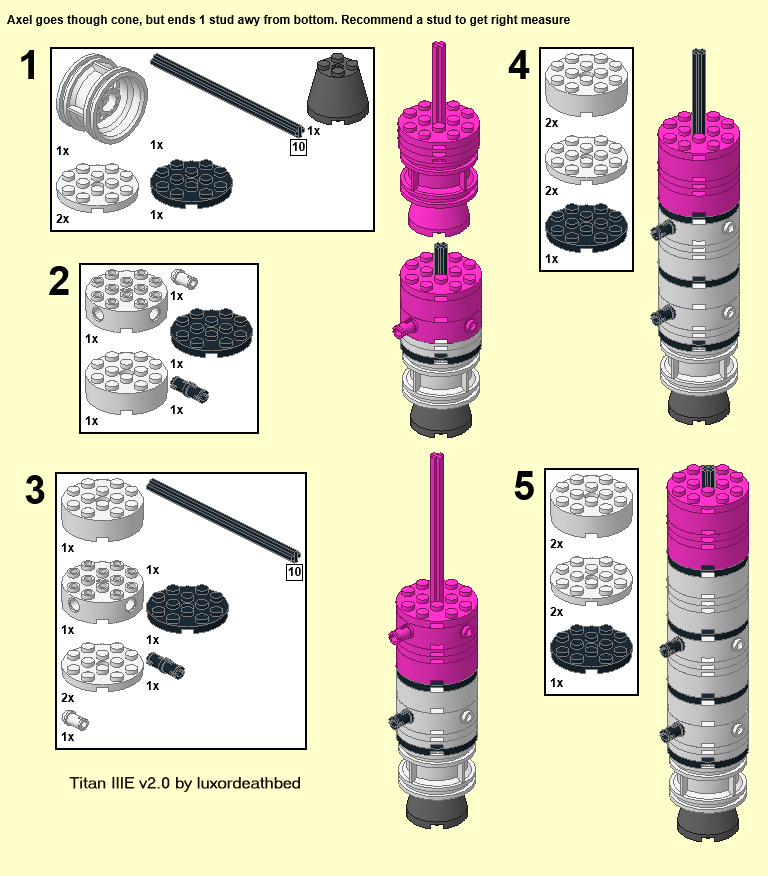 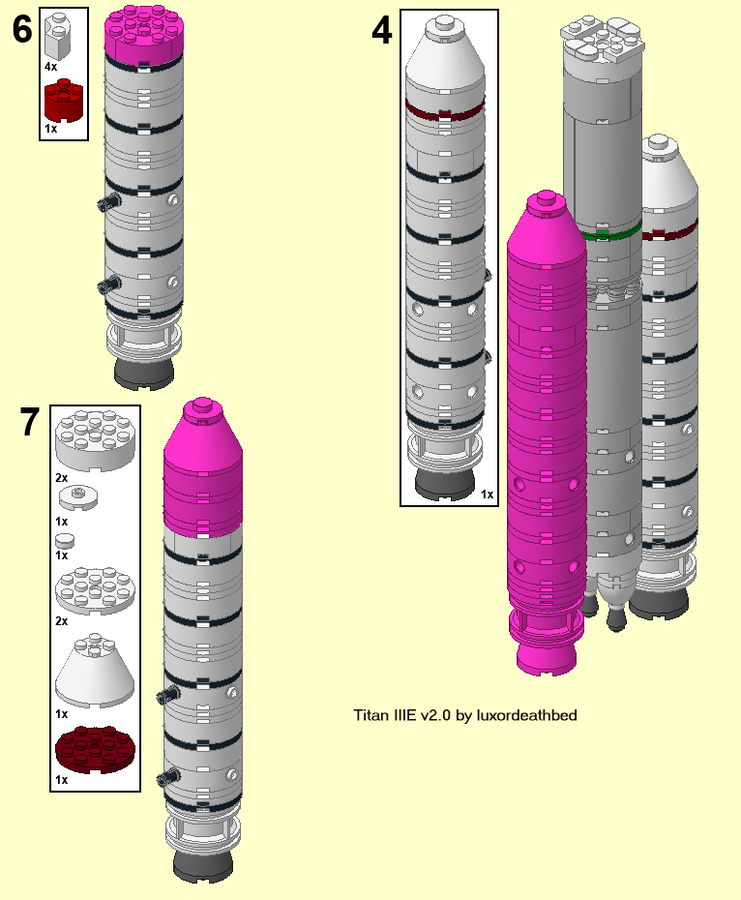 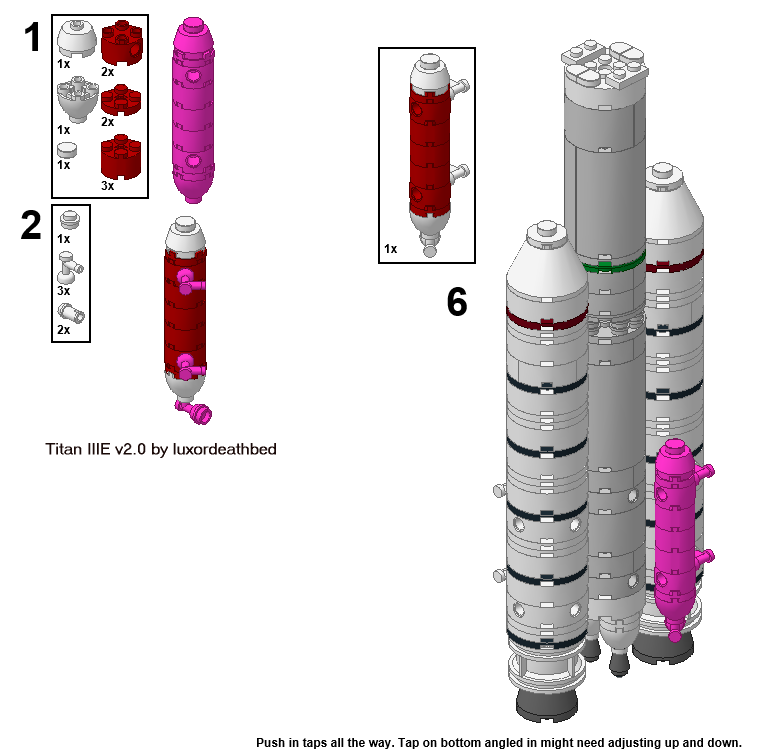 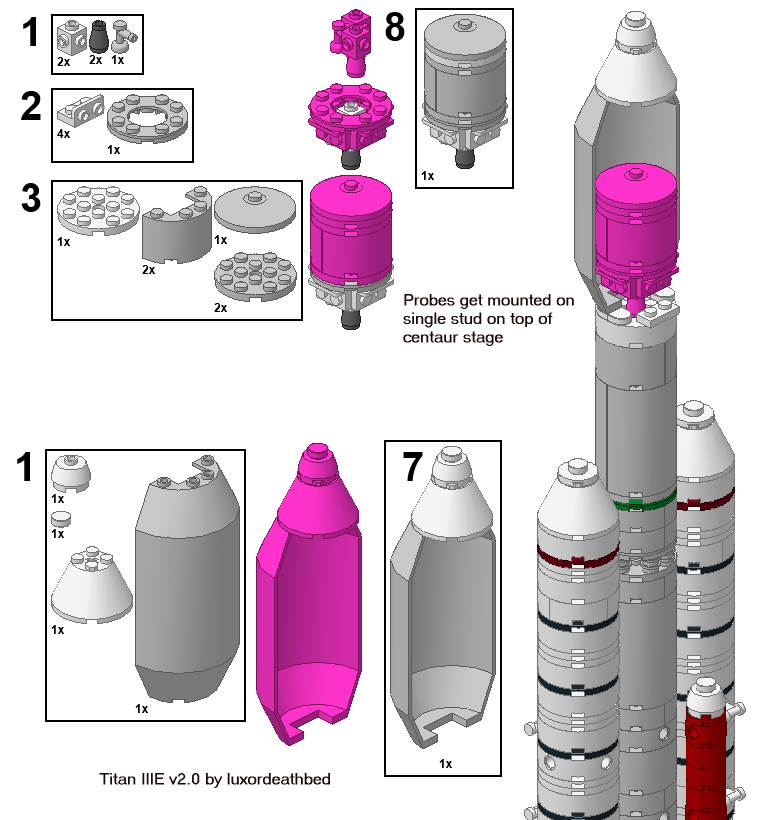 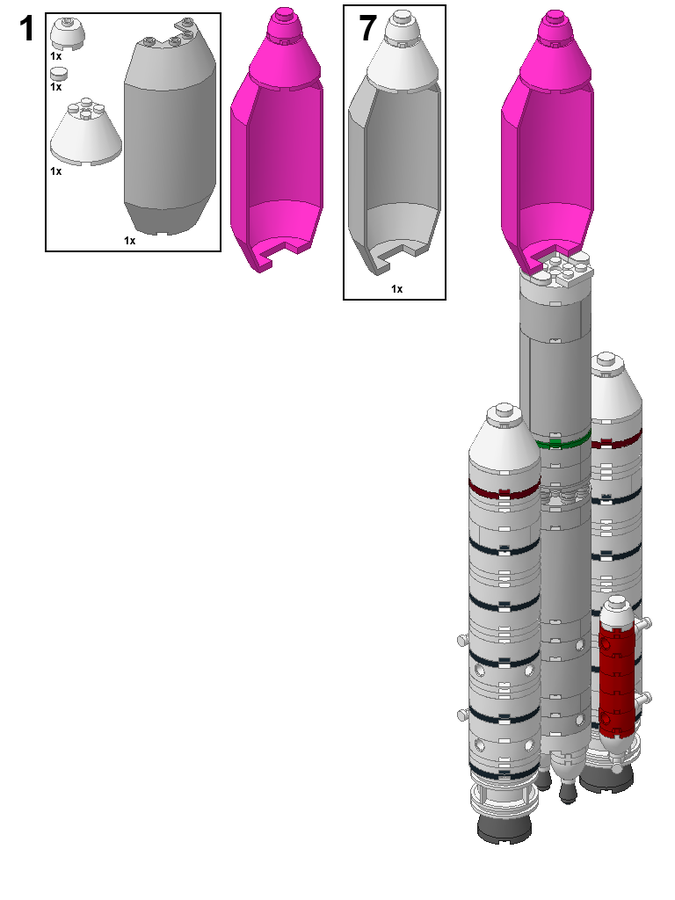 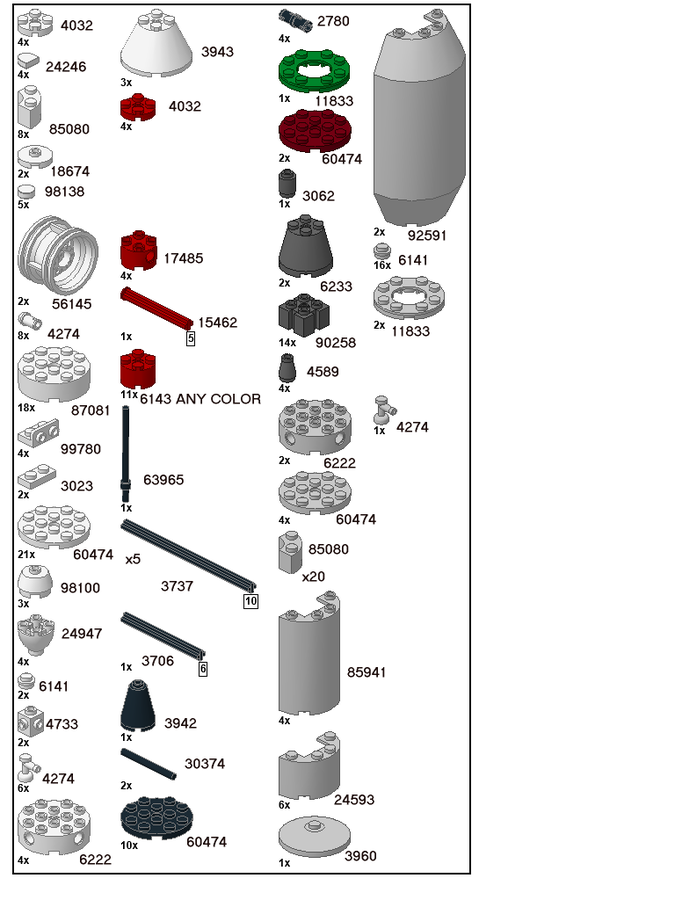