Following up on the galileo I thought Hubble would be a nice addition.  Designed to work with about 3 designs of orbiter floating out there, some crafting will be needed possibly to fit when and if instructions start showing up.  Otherwise a nice display piece  Shout out to the designer who's building tech made this possible.  tech_niek 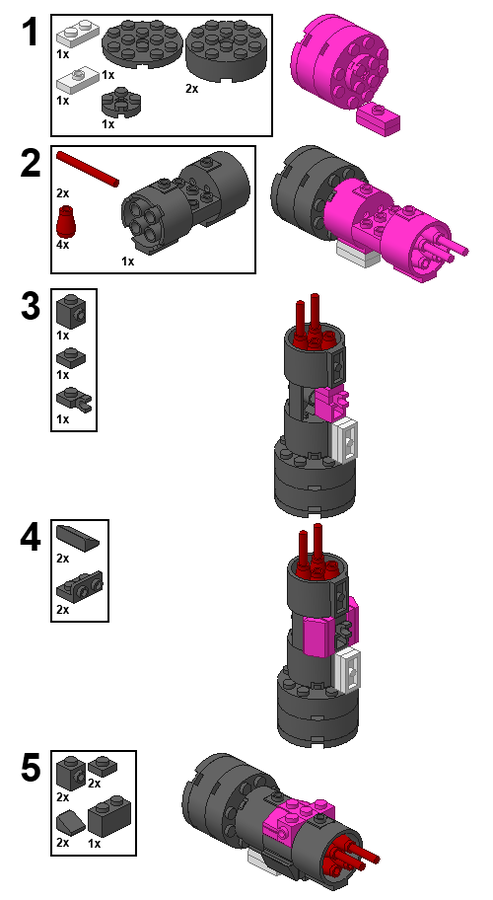 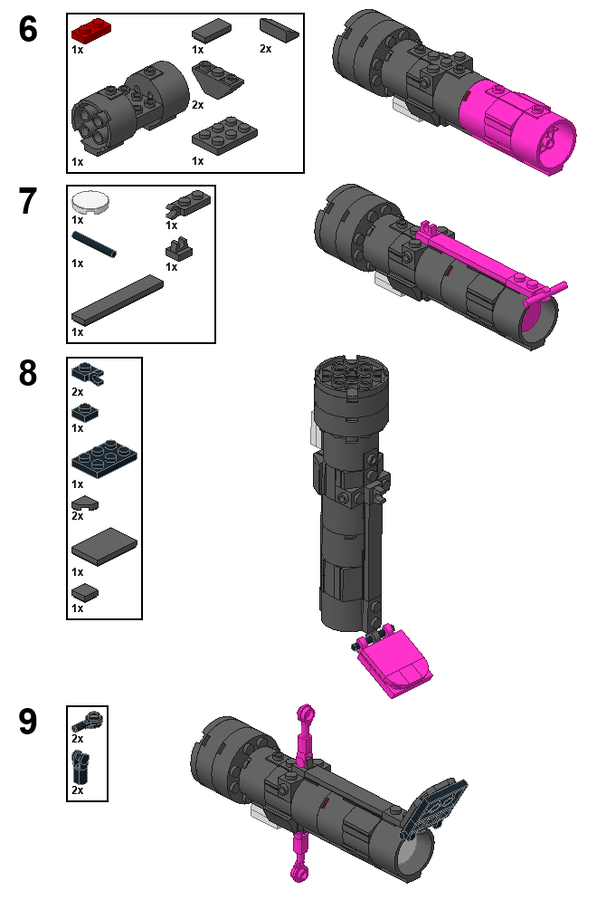 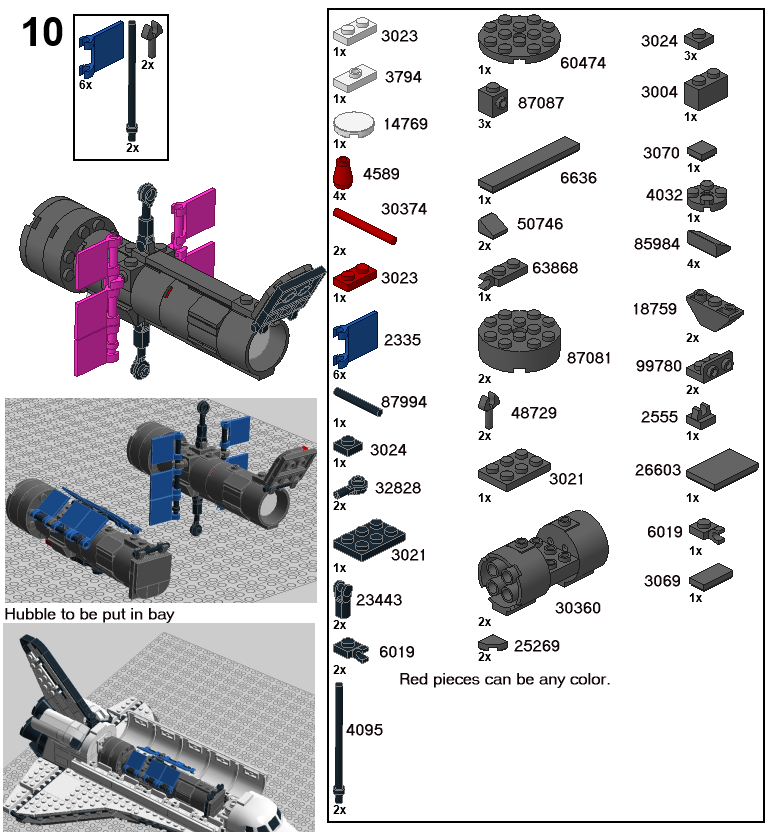 Been 5 or so months working on the galileo probe and finally wrapped it up.  Galileo was launched from the space shuttle where it met up with jupitor.  There it orbited the planet and it even dropped a probe into jupitor's atmosphere and provided some good data.  The bottom small dish was used as a relay with the probe while the upper anteanea transmitted to earth.  The other data point on galileo is that it was able to catch some images of a comet that crashed into atmosphere. 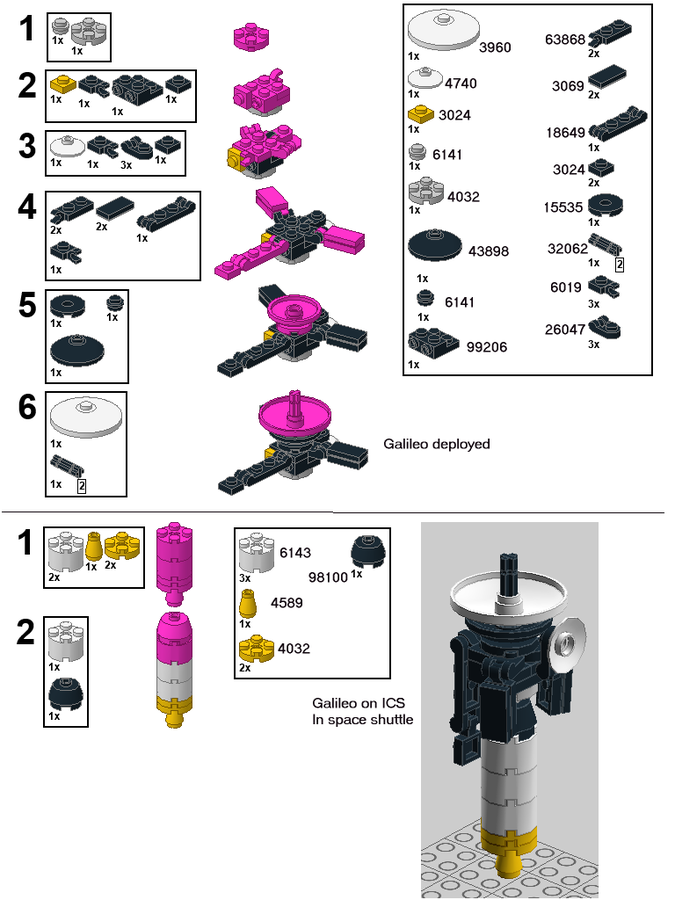 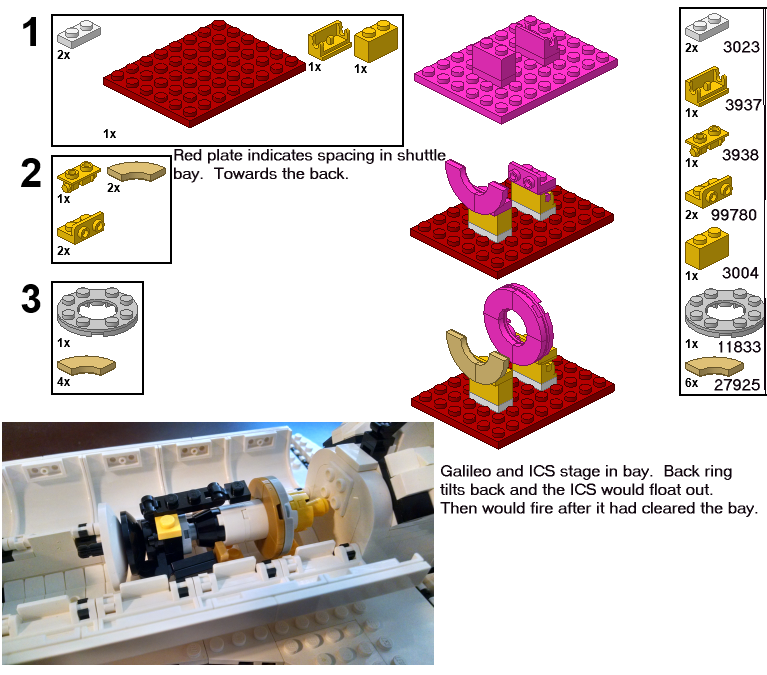 Got a prototype lined up and I love it.  Finally what the Atlas V 551 should look like.  Parts being ordered for the mod. 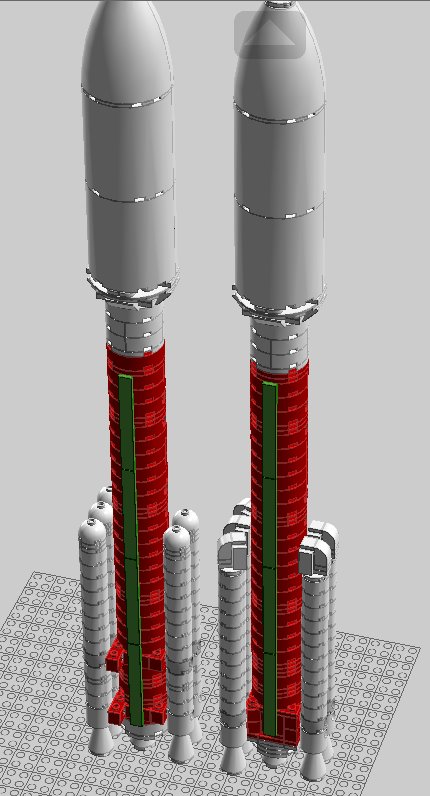 I finally was able to figure out a SRB setup that is closer to the original rocket.  Sorry to say, the old version is going to have to be modified and I will probably just draw up new instructions and try to remember to have a separate parts list to modify the old on if you already made it.  Here is the mock up template.  Also have a work in progress to change the top of the SRBs. 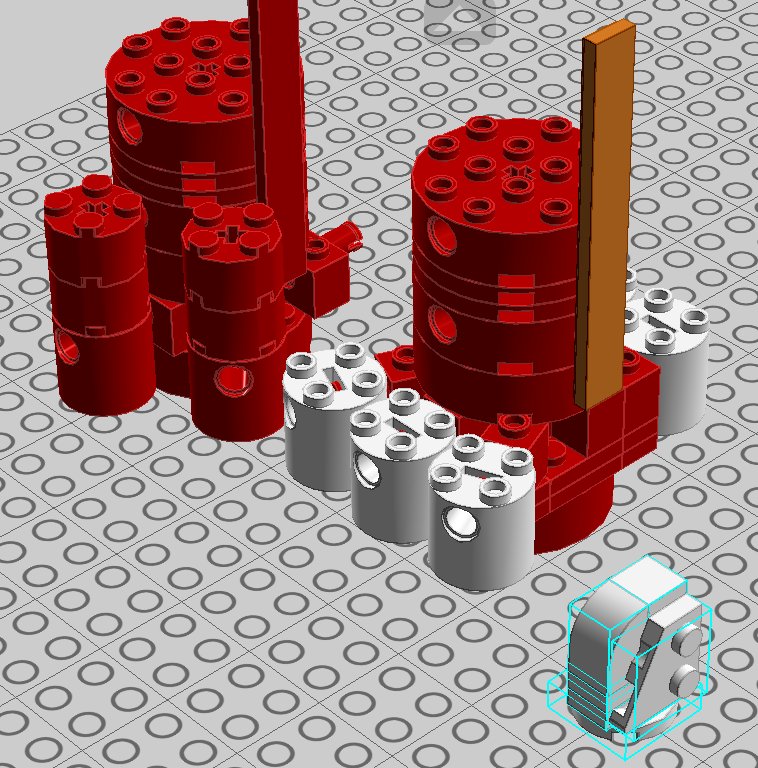 I found something in one of my files I was working on as a mini update to the Ttian IVB.  These boosters were intended to be swapable with the Titan IVB boosters fro the sake of completeness.  There were no exploratory probes launched on the Titan IVA to my knowledge so I never went furthure into figuring out the center stage setup.  For a practicallity stand point, this should just fine.  I am not going to do the center stage so you are left to you own devices if you want it.  Only note I got is that these instructions are for ONE.  So double the part count for two of the boosters. 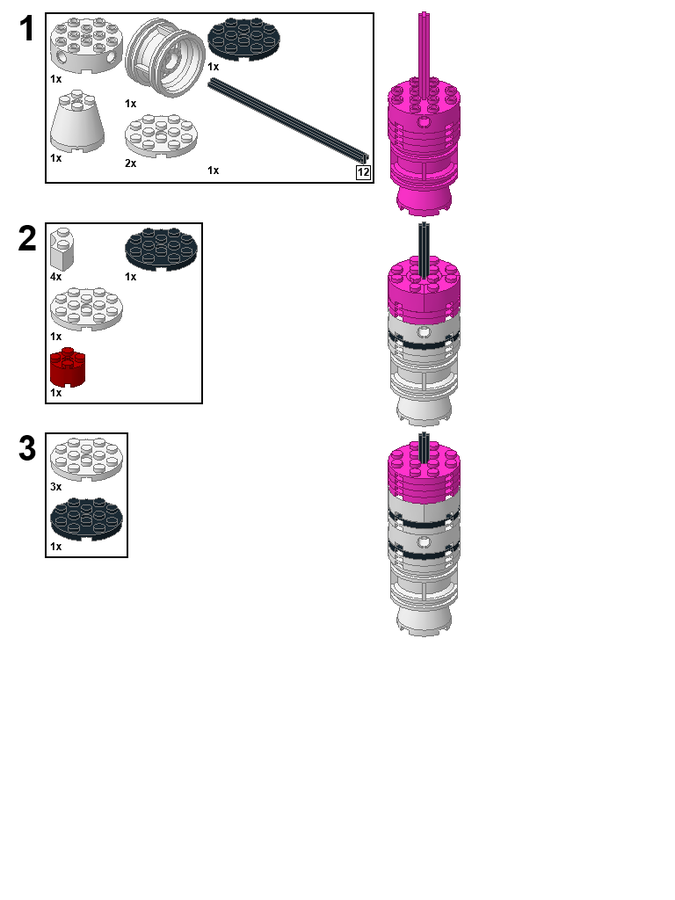 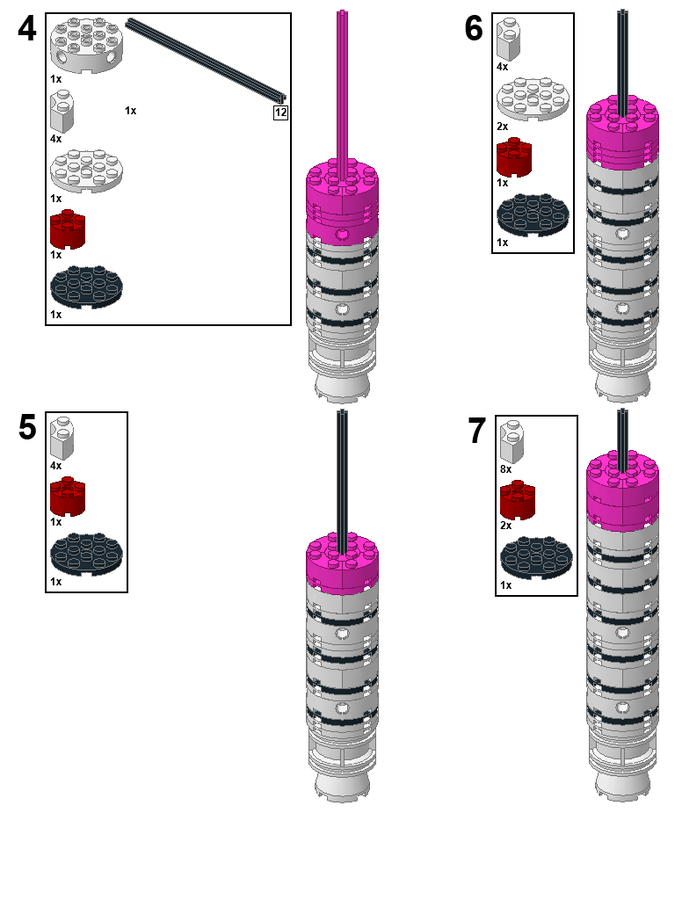 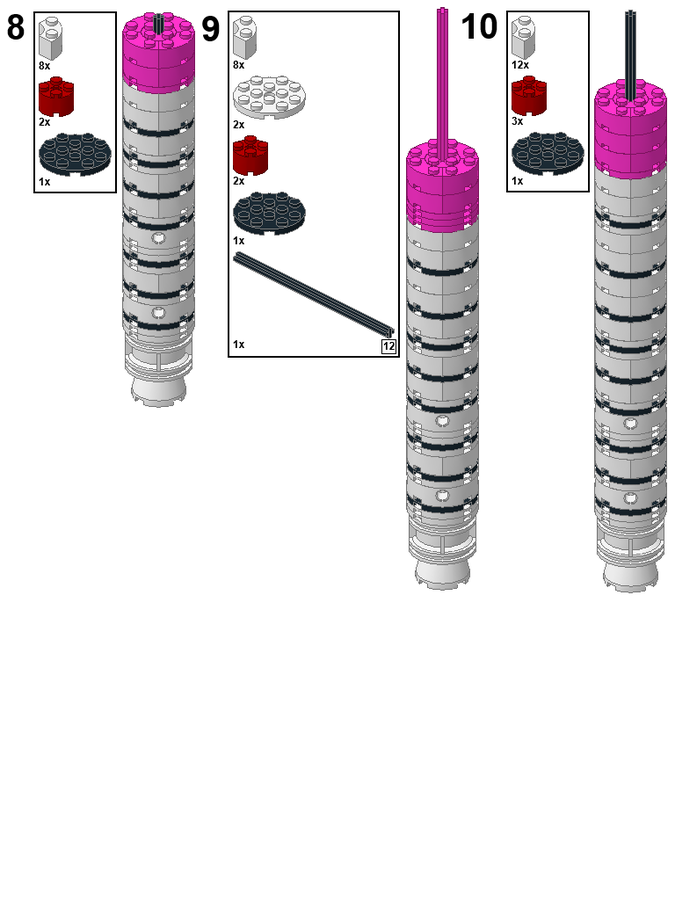 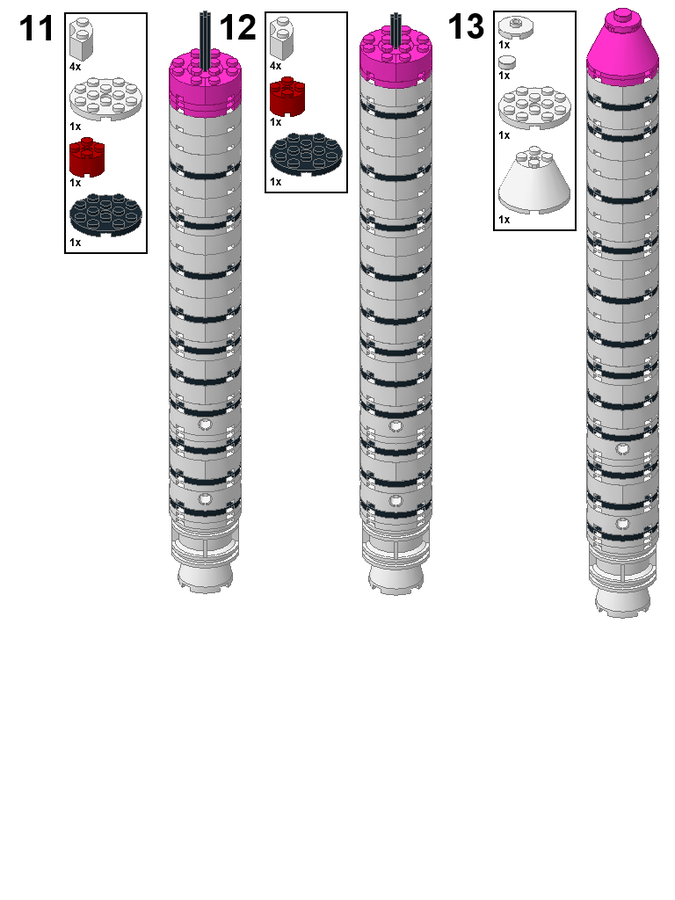 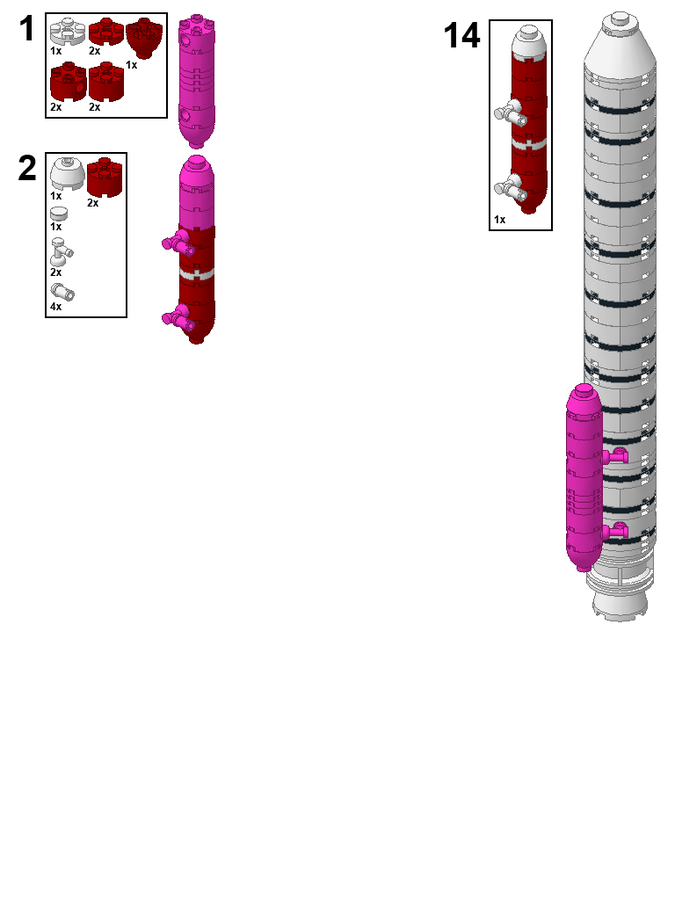 With the release of the Atlas V 551 instructions came research into coloring lego parts.  The bright orange cone had to be dealt with as it is the only color that exists for that part.  I tried some rattle can paints but fell back on what I knew would work and also could be undone easily.  Water based colors.  A google list turned up a few companies that carry what I would recommend.

I settled on trying the whitest white that games workshop citadel line carried.  It worked out ok.  It involved 3 layers of painting with 15 minutes between coatings.  Now the best part is that taking a simple green + water mixture and soaking the piece in it for a little and taking a brush (tooth brush might be be suggested) will remove the paint.  Here is a picture of my resulting test and settled on.  You can't see the texture which is kind of rough, but from a distance on a wall, it will be fine.  The color isn't a complete match up, so it is the best I can think up.  Until lego allows REAL custom parts ordering. 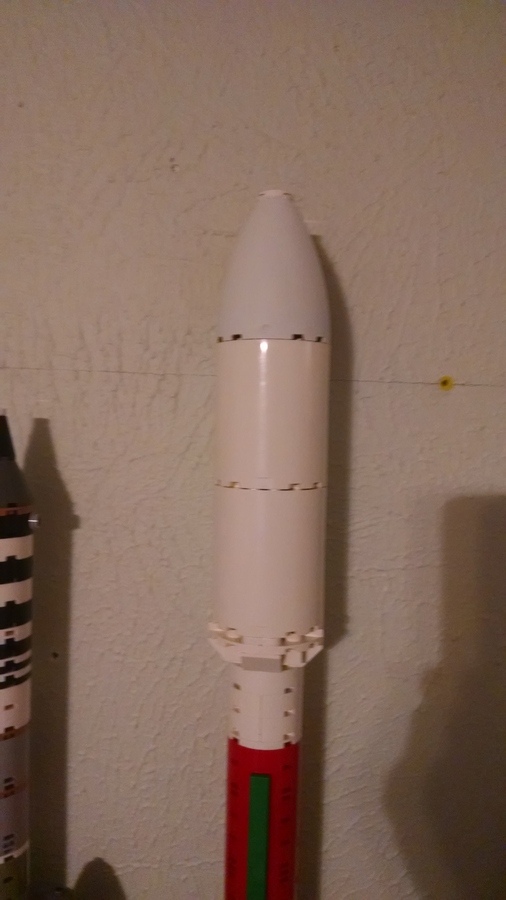 Here is the Atlas V 551.  Only pointers I got is that there are parts that exist yet in the right color. They are noted in the parts list.  The top of the rocket shroud only comes in orange and I have it listed as white.  The other is one of the round connection points for the srbs.  Only light grey really exists close to white.  Consequently if you want an exact color rocket, dyeing or spray paint will be needed.  I am looking into it myself so will post something if full proof.  Last planned release I got is galileo and its stage that launched it from the shuttle. 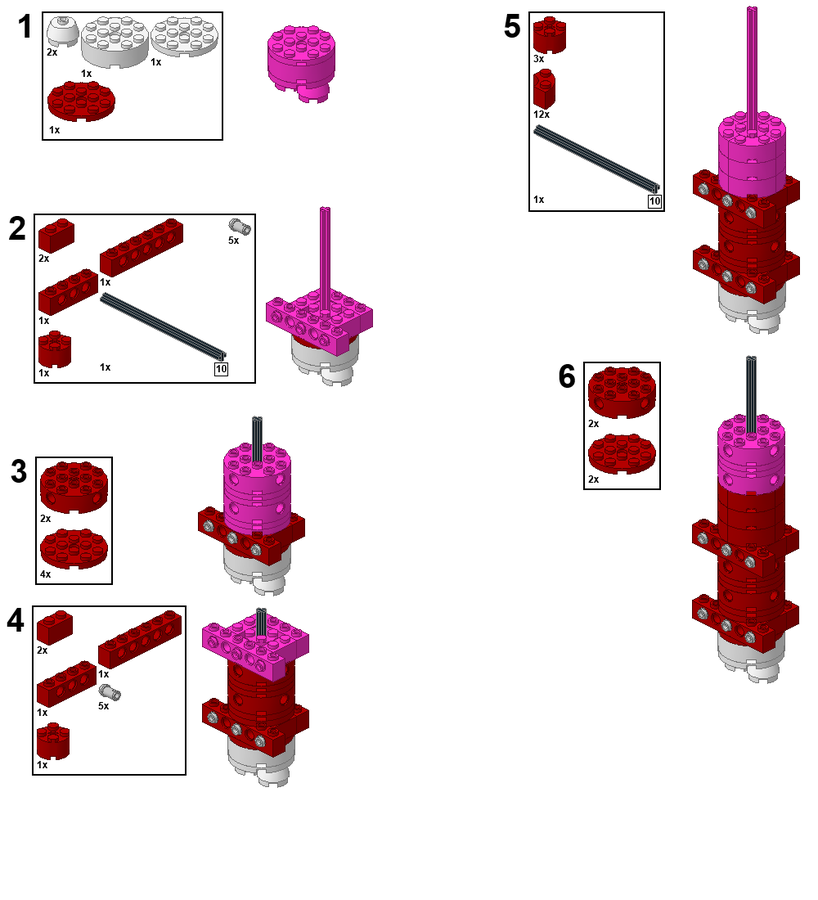 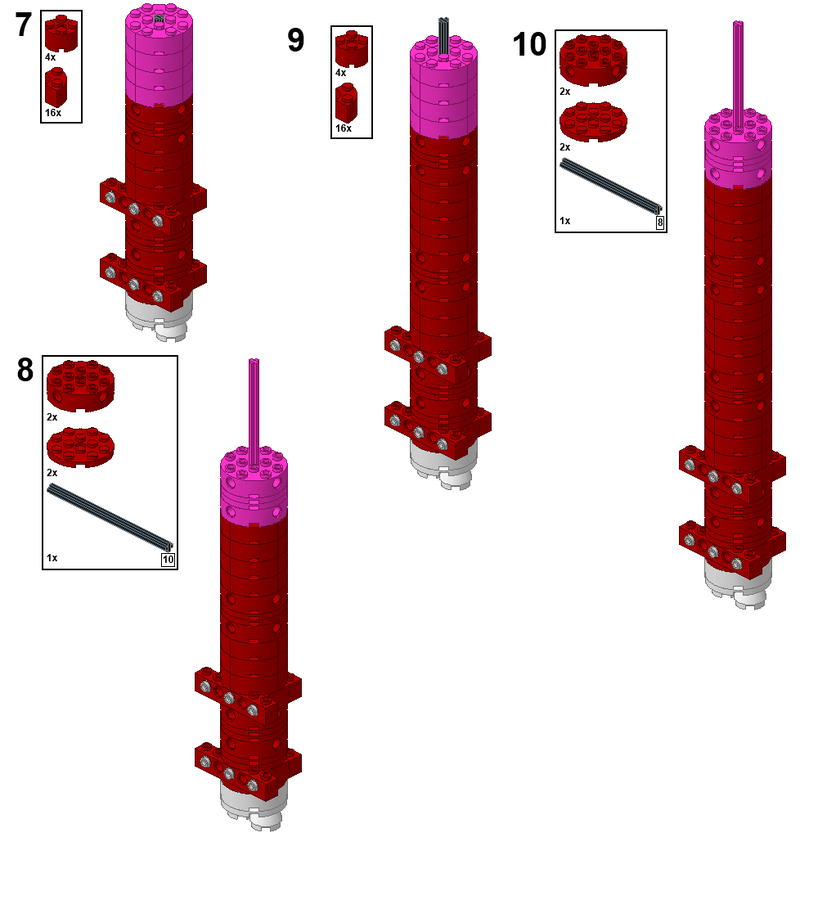 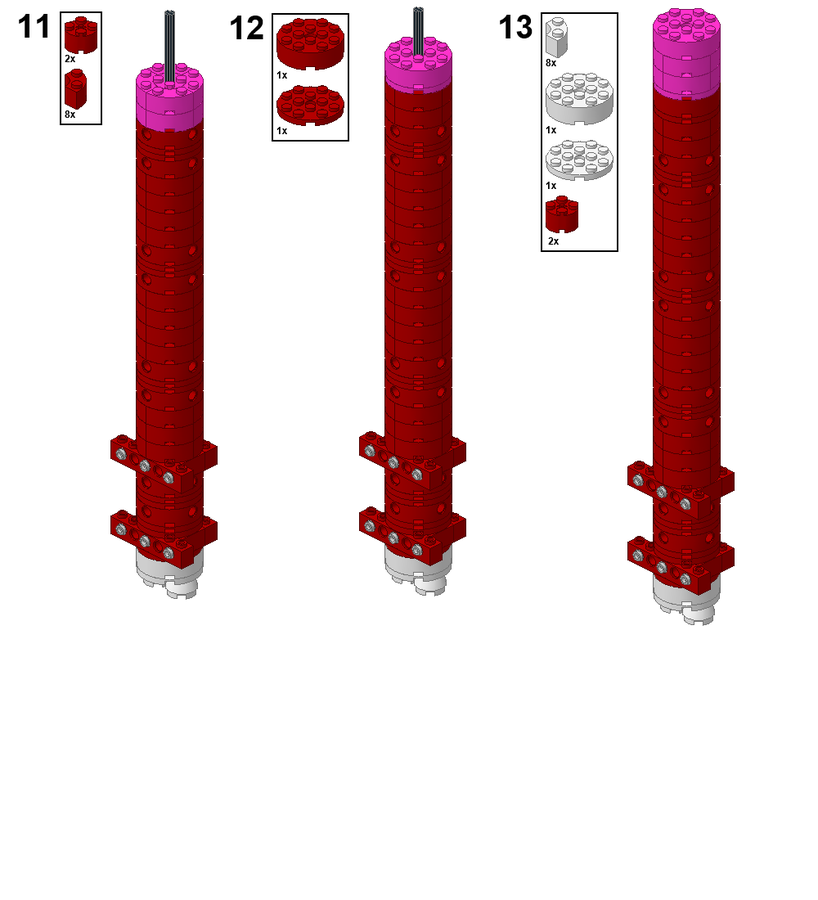 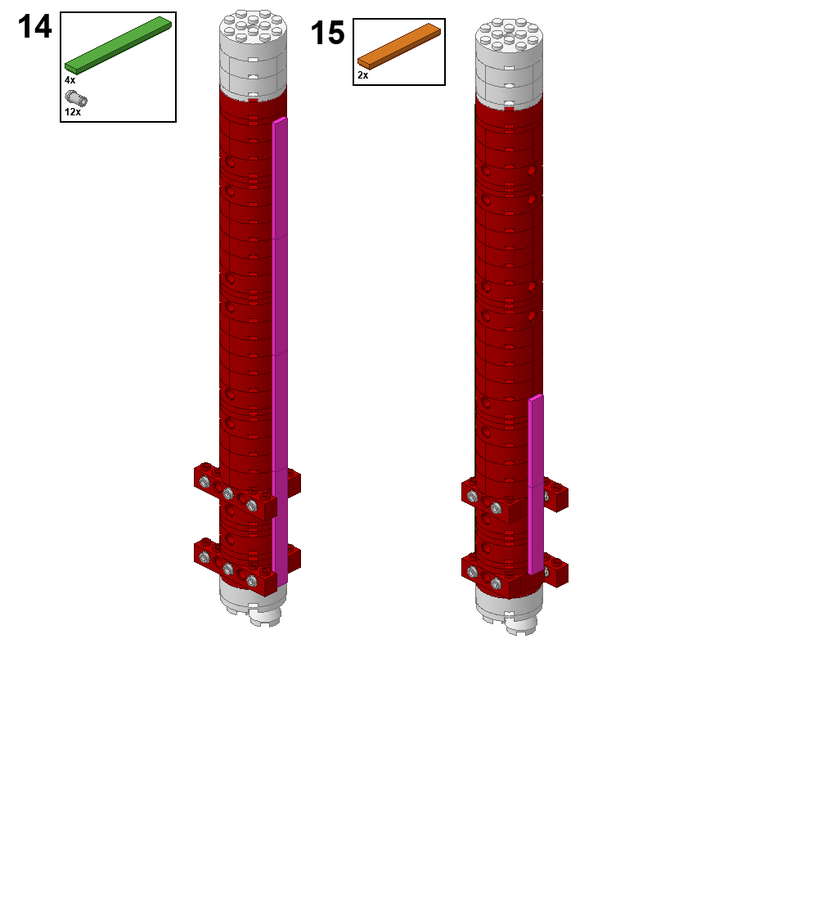 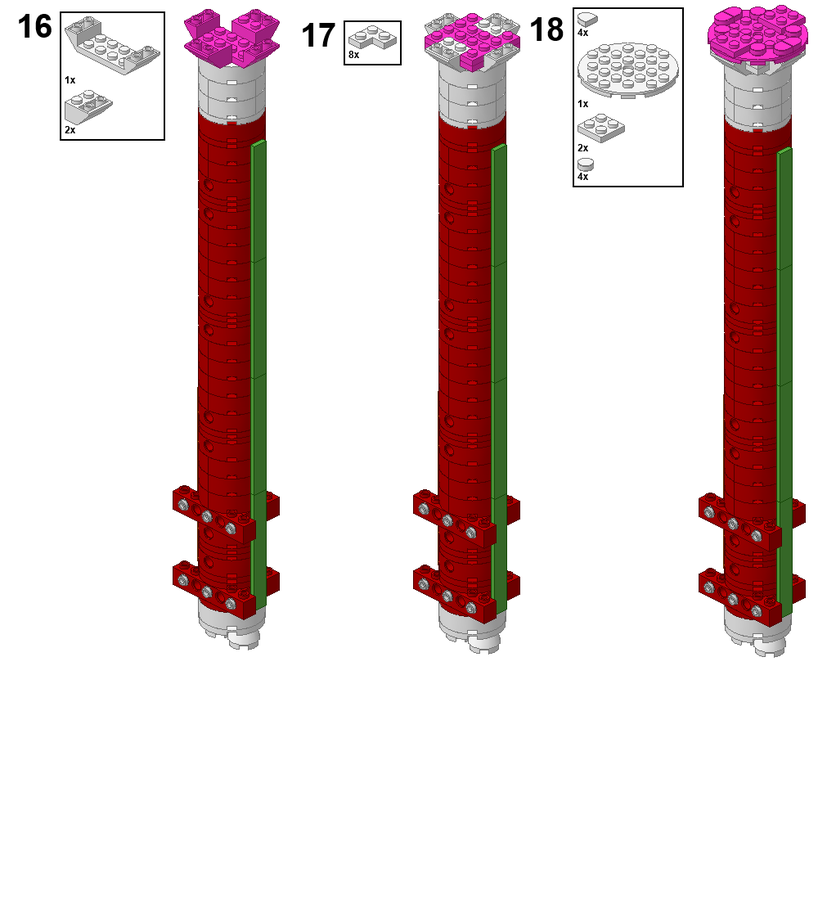 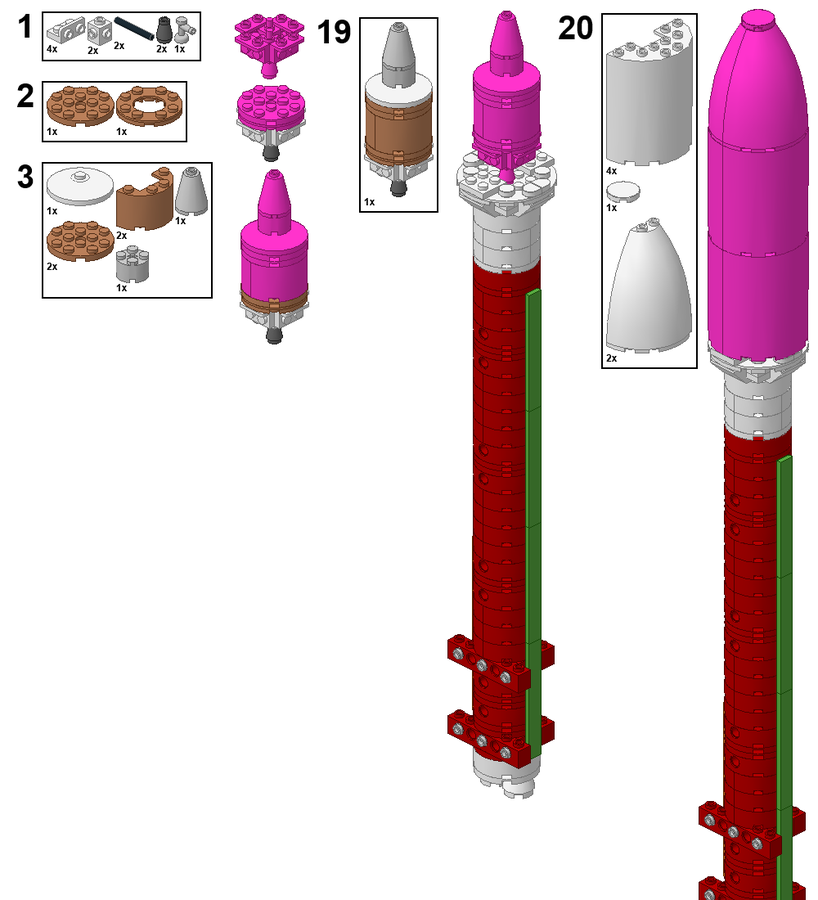 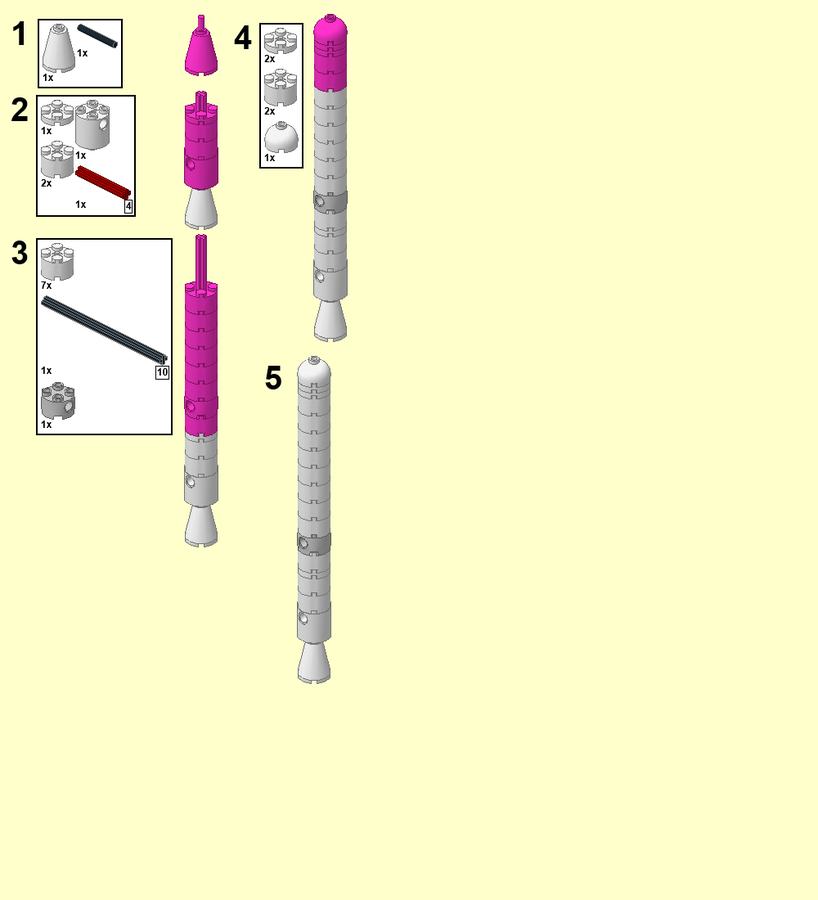 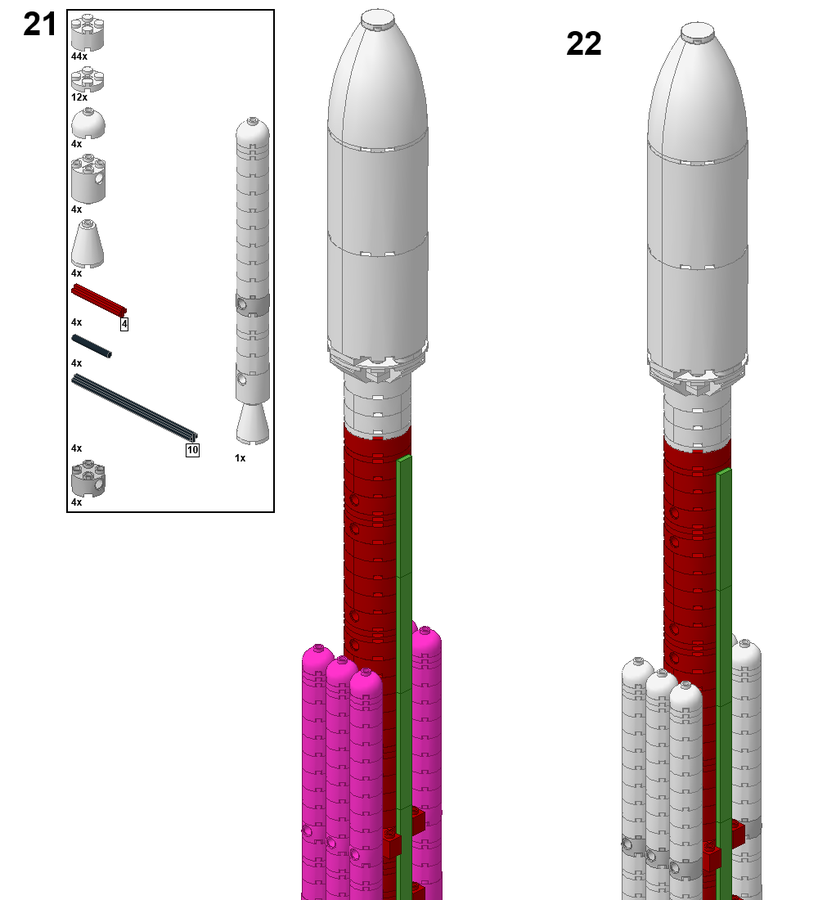 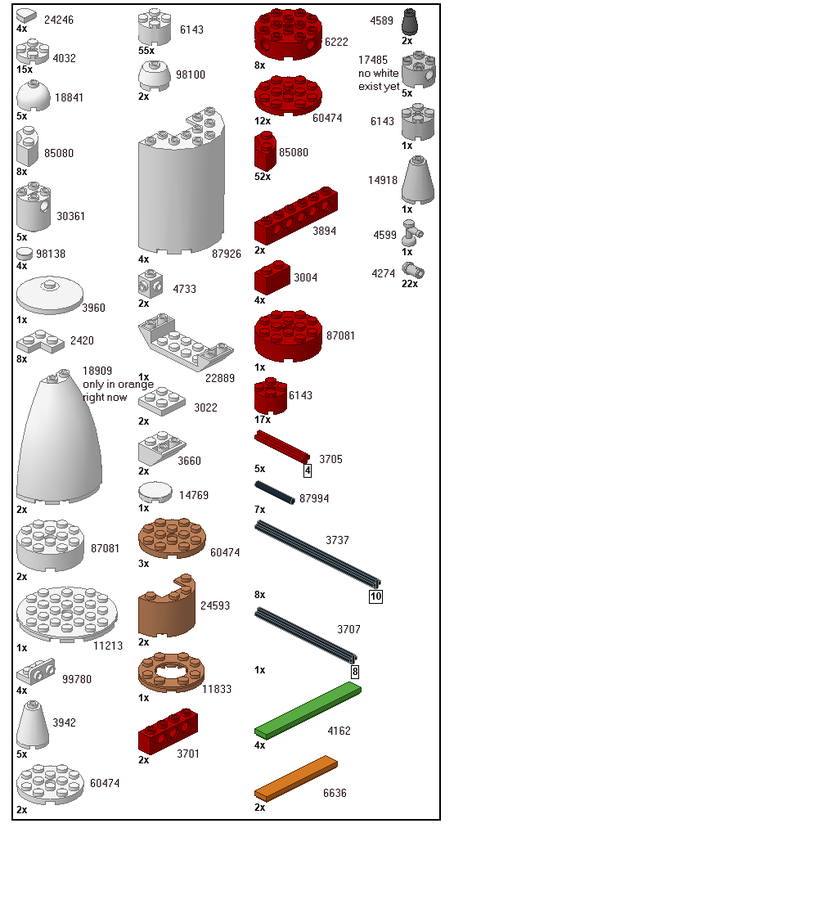 Its time to release the probes that go on the Atlas V 551.  Shortly there after I should be putting up the Atlas V 551.  Only thing I got to say about these probes is that they go on an adaptor that goes on top of the centaur stage.  It will be self evident what is it.  For the Juno probe, there really wasn't an adaptor, but New Horizens did and it was in fact another stage to zoom it out to the edge of space.  The lightest probe on the most powerful rocket they say. 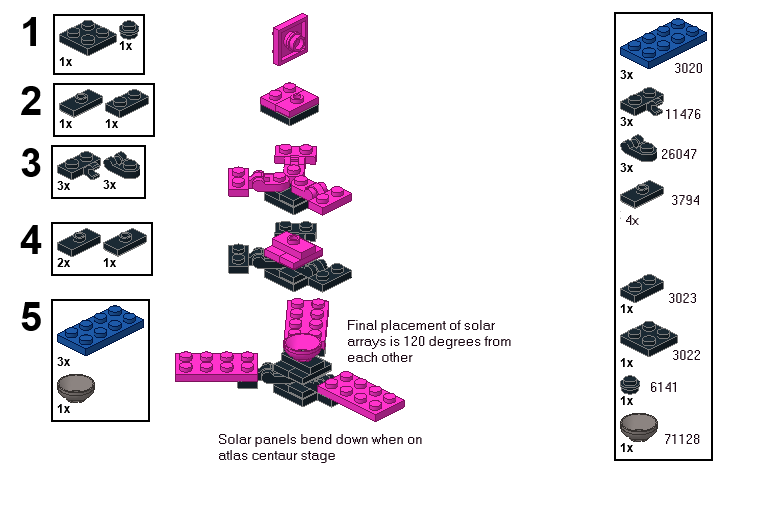 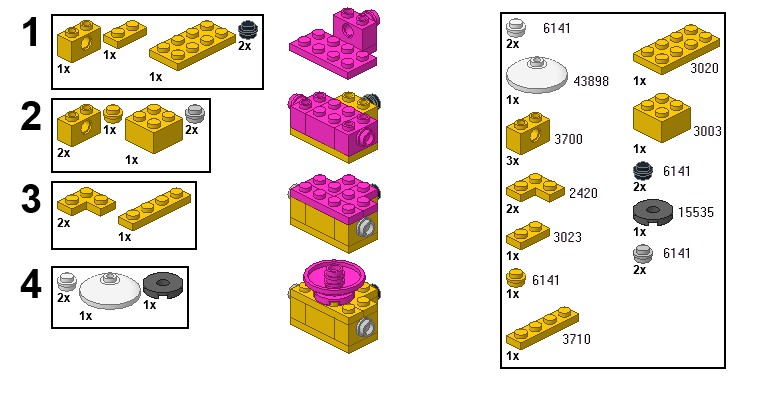 With the rejection of the shuttle and LUT, I was at odds with if we would ever see both.  Fortunantly I found a community that is heavily into the 1/110 scale of lego space models.  I foresee a shuttle being released in 1/110 some time and I hear the LUT plans are floating around.  So I decided to look at the Galileo probe for the shuttle.  I learned it was not launched from a cantaur stage but a rather simplier design.  So I have to remake the lower stage slightly.  Here is the mock up of the probe. 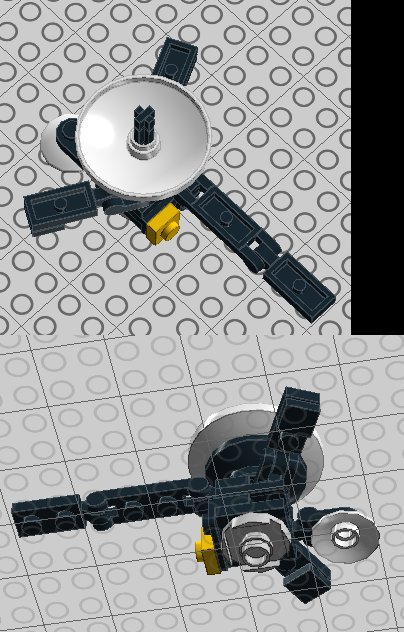 The prototype is complete allong with New Horizens and Juno.  It certainly looks better and pretty much spot on for size.  I will have insturctions another time as I am pretty busy with another project that I picked up.  I am also working on the Galeleo probe for other reasons.  On another note, looking for a way to spray the nose cone white.  So if you have had success with painting lego, drop me a comment. 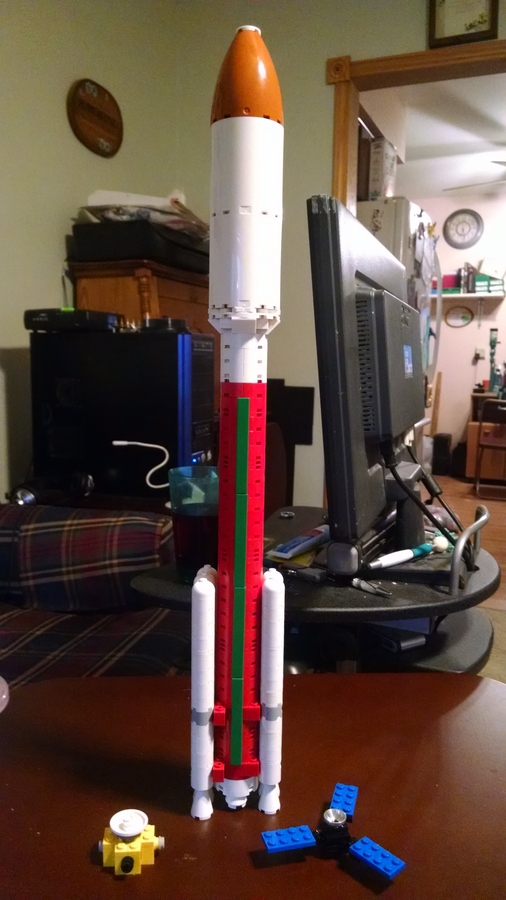