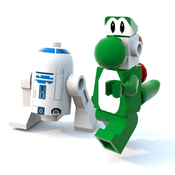 The Blue Falcon is from the extremely fast zero-gravity racing franchise F-Zero. It is piloted by the famous Captain Falcon! He competes in the F-Zero Grand Prix against 29 of the galaxy's greatest racers. F-zero is one of the most exciting of all racing games and also one of the most difficult, forcing players to make split second decisions in order to stay on track and avoid scraping any walls.

As for my build, I based it on F-Zero GX. It has an opening cockpit, which can hold a minifigure, and usable landing gear. I tried to make this model as sleek as I could and, more importantly, still portray the Blue Falcon's shape accurately. I believe I started building this in 2014 and finished it sometime in 2015. Since then I have made a fair amount of modifications to it. I was inspired to build my F-Zero MOCs after seeing Zurtech's great F-Zero ships. For my Blue Falcon, I wanted to take a different approach than other builders took with their LEGO Blue Falcons, deciding to build mine in a larger scale.
This year is the 30th anniversary of F-Zero!

This project includes the Blue Falcon and an exclusive Captain Falcon minifigure.

Please check out my other project(s) too.

Note the background is sadly not included