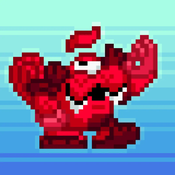 "Kirby (Japanese: カービィ, Hepburn: Kābī) (Japanese pronunciation: [kaːbiː]) is the titular protagonist of the Kirby series of video games owned by Nintendo and HAL Laboratory. As one of Nintendo's most famous and familiar icons, Kirby's round appearance and ability to copy his foes' powers has made him a well-known figure in video games, consistently ranked as one of the most iconic video game characters. He first appeared in 1992 in Kirby's Dream Land for the Game Boy."
Welcome to Dream Land, located in Planet Popstar, inhabited by none other than the famous Kirby, a pink puffball with a HUGE appetite, inhaling everything in sight!
BASIC INFORMATION
Having some fond memories of this franchise ever since I was young, I wanted to capture most of the Kirby aesthetic using design aspects taken from games such as "Kirby Blowout Blast", "Kirby Star Allies", etc.
The game with the most representation in this set is "Kirby's Dream Land" since it was the first game in the series and the one with the most sales (also because it's almost the 30th Anniversary of the game, and by extension, the franchise!), but I've also included some fan-favorites such as the main quartet from "Kirby's Return to Dream Land", and, representing the "Dark Matter Trilogy" (a fan-name given to 3 games in the series which have Dark Matter as an antagonist: "Kirby's Dream Land 2", "Kirby's Dream Land 3", and "Kirby 64: The Crystal Shards"), Gooey!
I mainly wanted to capture specific recognizable moments that have been a part of the first game (with the exception of Kirby's dome-shaped house, which debuted in "Kirby's Dream Course"), such as Whispy Woods' Boss area, and King Dedede's castle, being the final location of the game.
The point of this set is essential to just be a combination of a "playset" and a "display piece", with an all-black base for that "display aesthetic", but with certain play features such as the ability to launch the castle's glass dome by slamming a lever behind it, and several studs to stick characters on and pose them however you like.
This project, built in the Bricklink Studio software, has 1517 pieces, 11 brick-built figures, and 5 Kirby Copy Abilities/Face Prints!
THE INCLUDED FIGURES
If you are a Kirby fan and want to see this set get made, then I recommend clicking on the fancy "SUPPORT" button, and if you know other Kirby fans that would also like this set, share the link with them, it'd truly mean a lot!
Happy 30th Anniversary, Kirby!