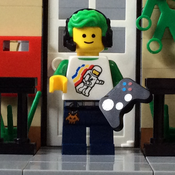 Ever since I picked up the wii remote, I have been obsessed with Nintendo. Today I am proud to present you with my most favorite project by me. The Nintendo Game Consoles Collection! This Project is a compliation of (Most) of the Nintendo consoles and handhelds.
History:
In 1985, Nintendo, a once card and toy making company, released its first home console system, the NES. With only a handful of games, they released their next system, the SNES, and only a few years later, their first handheld, the gameboy. Next, Nintendo made the all famous N64, along with the Gameboy Color. Felling confident, they released the Gamecube and the Gameboy advanced. Falling behind in the video game industry, They stopped up, releasing the DS and everyones favorite Wii. Then it went down hill, when Nintendo released the Wii U. However that kept going and released the successful 3ds. Finally, in 2017, they unveiled the Nintendo Switch, and soon after released the Switch Mini. And that's where they are today.
Details:
This project contains over 1,400 bricks, and a total of 12 builds. Including:
Nintendo Nes

And for the handhelds:

And the Nintendo 3DS.

This project was built entirely by me.
Credit to my friend R2rules for rendering my project.

This project took around 14 hours plus the rendering time.

Please do support my projects and follow both of us. Please feel free this project on social media, and tell me what you think in the comments down below. It helps out a lot.
Thanks and see you soon!