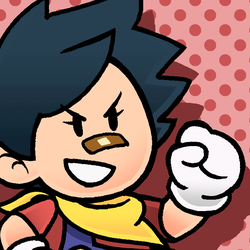 "My name's Brick Road, the dungeon developer. I've devoted my life to making dungeons. Well, by combining my skills and Dr. Andonuts' intelligence, I can become 'Dungeon Man,' the first combination of human and dungeon in history."
Hailing from cult-classic Super Nintendo game EarthBound, the colossal Dungeon Man has arrived to rescue the Chosen Four! He is not only fully articulated, but can be opened to explore the titular dungeon and its many treasures! And, of course, when your journey is over, simply take a hop down the Goodbye Exit.
Who- or what- is the Dungeon Man?
The magnum opus of dungeon-maker Brick Road, the Dungeon Man is, as the name suggests, a fusion of both man and dungeon, with Brick Road himself at the helm. He stores his many treasures inside the dungeon body, as well as other amenities such as a pay phone, an ATM, and a hospital. Much like your typical dungeon, it features labyrinthine design and several floors to traverse through. Littered about are signs with hand-written messages from Brick Road, typically offering advice or information on something nearby.
Why EarthBound?
EarthBound is an incredibly important game, not just to players, but to the gaming industry as a whole. Since it's release in 1994, it's gained an immense and growing cult following, only getting stronger thanks to exposure from things like the massively popular Super Smash Bros. series. In Japan, EarthBound (or MOTHER 2) maintains a healthy following, as its creator, Shigesato Itoi, continues making content and merchandise for the game as recently as 2018.
To me, the EarthBound games are some of my favorite pieces of media of all time, and a Lego set for the game would be a dream come true. I made sure to translate Dungeon Man as accurately as possible while retaining a sense of playability that taps into the original wonder of having him join your adventure all those years ago.
Breakdown
Brick Road & Dungeon Man features ~990 pieces, and includes-
Thank you for reading! If this set interests you, please share the project on social media using the hashtag #LegoEarthBound!
329
days left
31