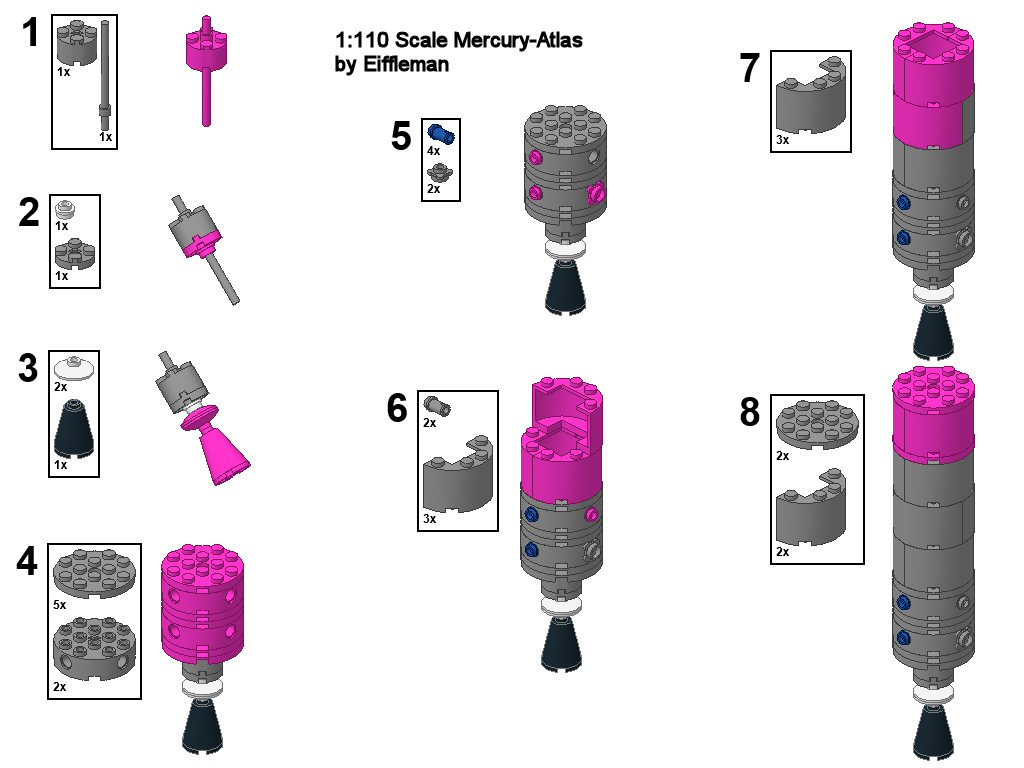 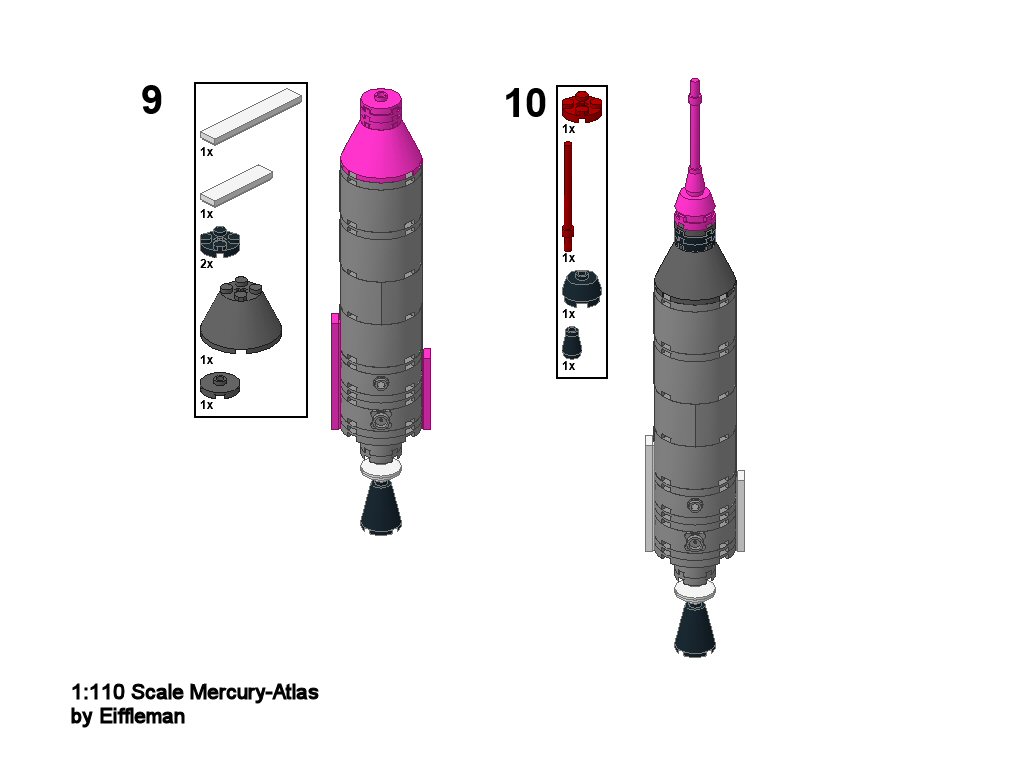 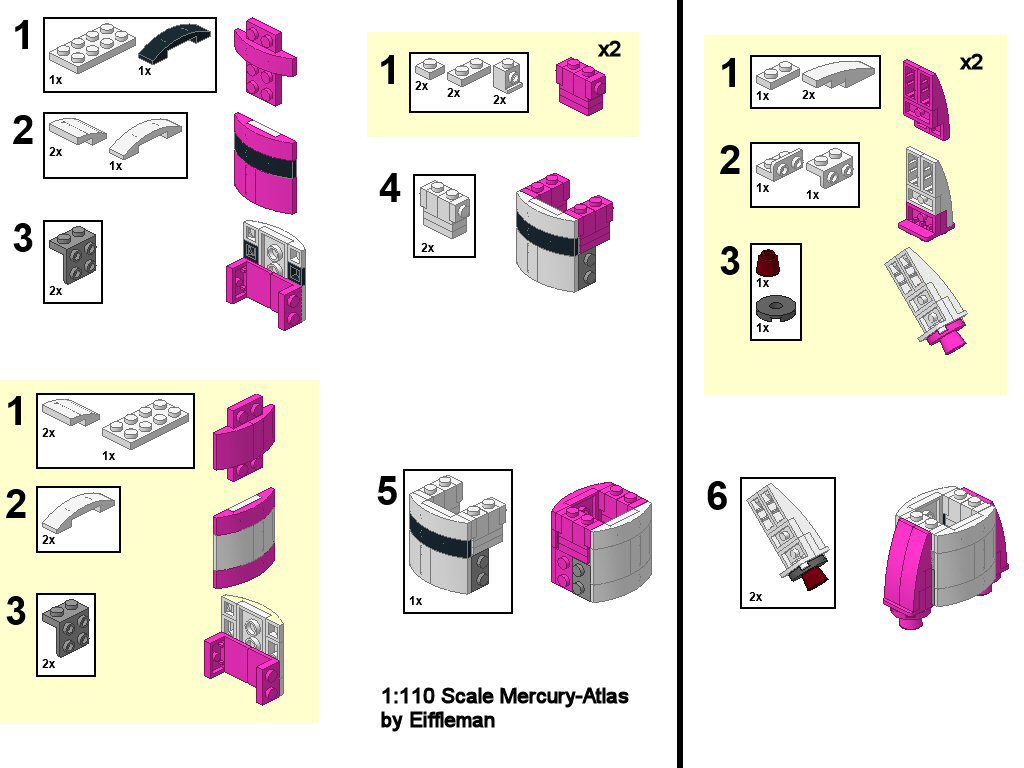 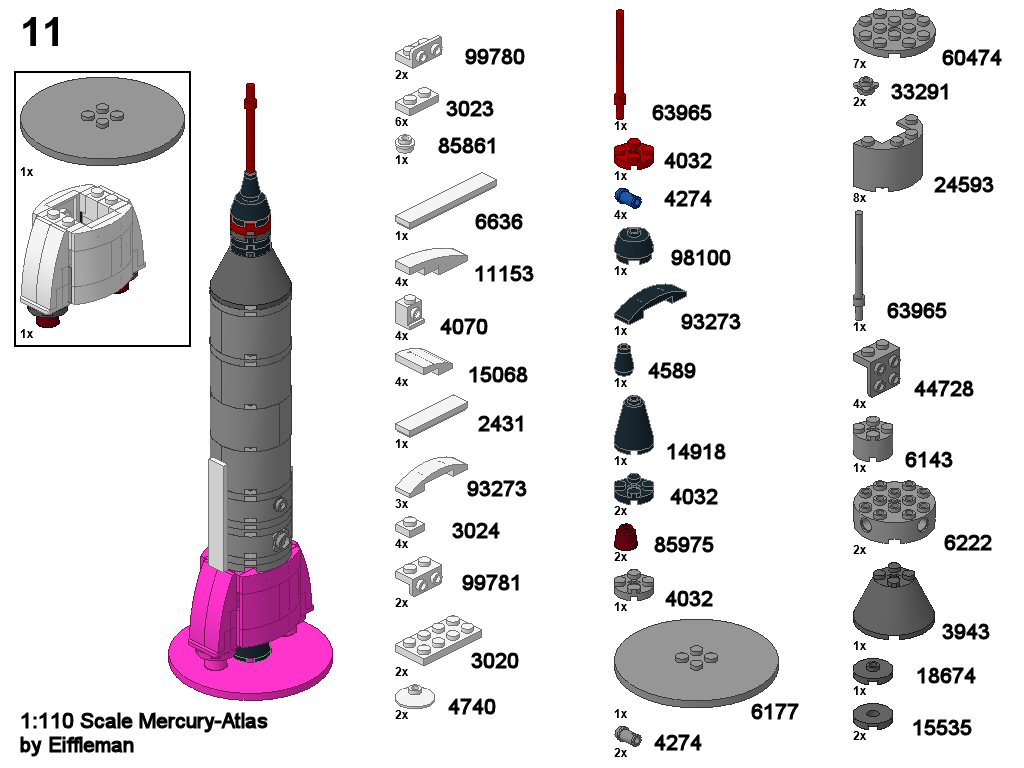 When I started out designing models to match the scale of the Saturn V, I planned to make then up in LEGO. After a few weeks of finalising designs and waiting for a backordered Saturn V. I have completed the builds. The line up is Mercury-Redstone, Mercury Atlas, Gemini Titan II, 'Little Joe II' escape system test rocket on its launcher, Saturn 1B, Apollo Saturn V, Skylab Saturn V. 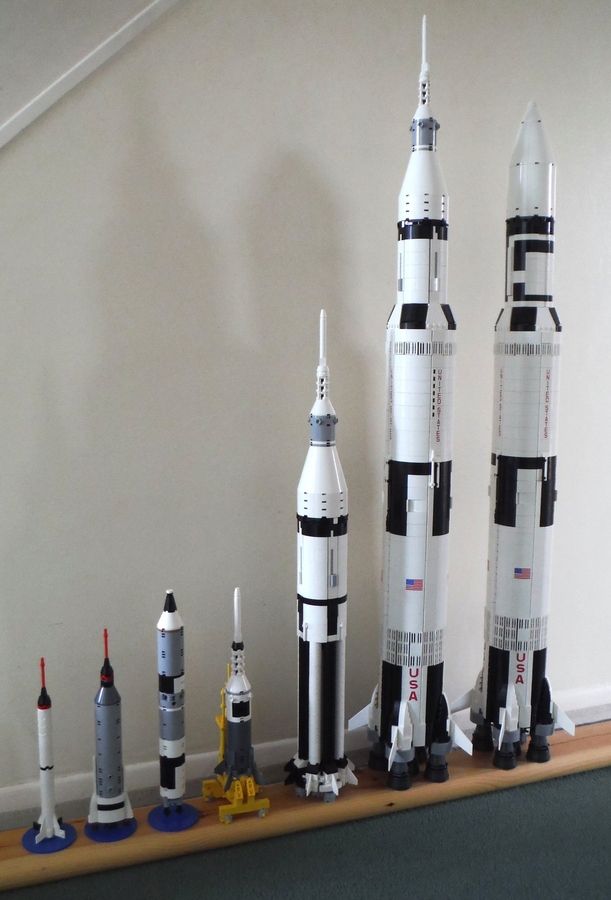 Build instructions for the Mercury-Redstone and Gemini-Titan II are below in this project's updates. The 'Little Joe II' Rocket can be found in my NASA Crawler-Transporter Updates as a bonus build.

The Skylab payload is in the updates for my Skylab 3 in 1 project.

More building instructions to follow in the near future.

My 1:110 scale rocket collection continues to grow and what better way to display them than by creating a base plate design which captures the spirit of the Kennedy Space Center's Rocket Garden. In addition to the Mercury Redstone, Atlas, Gemini Titan II this features 'Little Joe II' on its launcher, the X-20 space plane and a Saturn 1B first stage.

Building instructions for the Mercury Redstone and Gemini Titan II are in earlier updates (see below). The 'Little Joe II' Rocket was a bonus build I put in with the NASA Crawler-Transporter https://ideas.lego.com/projects/0f8efc2a-ce0a-4285-9f2b-036bf3eb9f38/update....

Thank you to everyone who has supported my NASA projects. 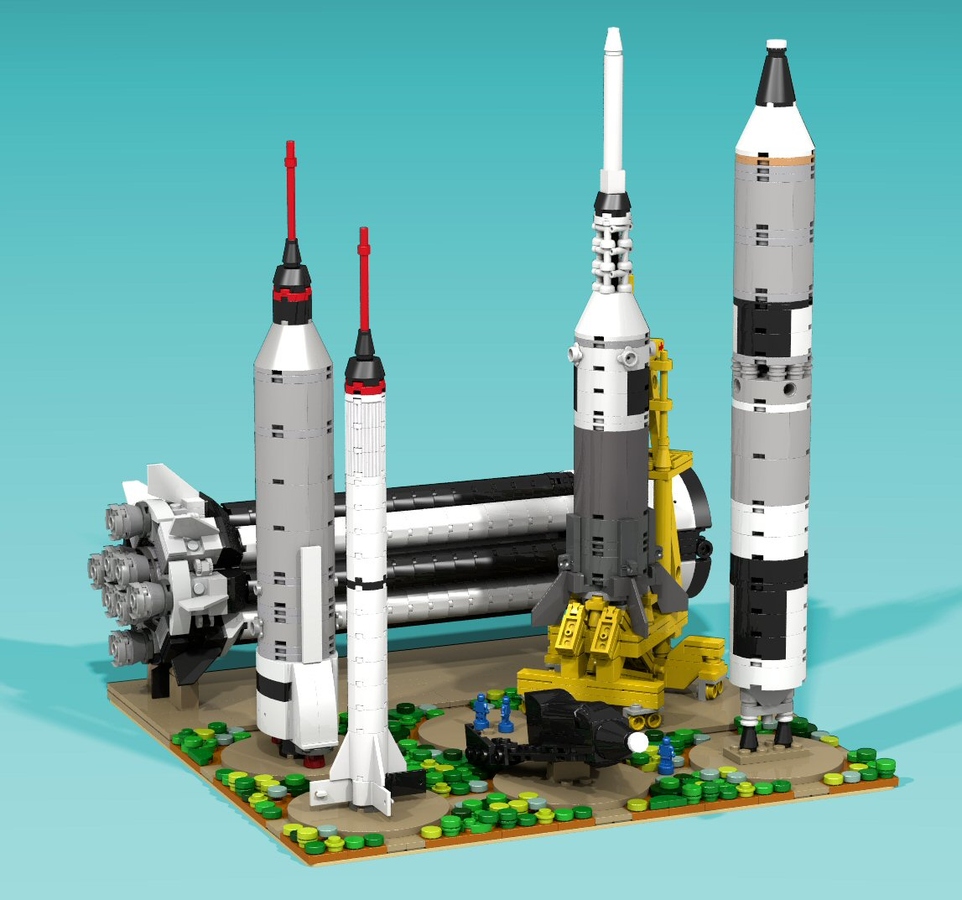 The final part arrived so I could take a couple of photos of the completed rocket and line it up with the Saturn V and Mercury-Redstone. 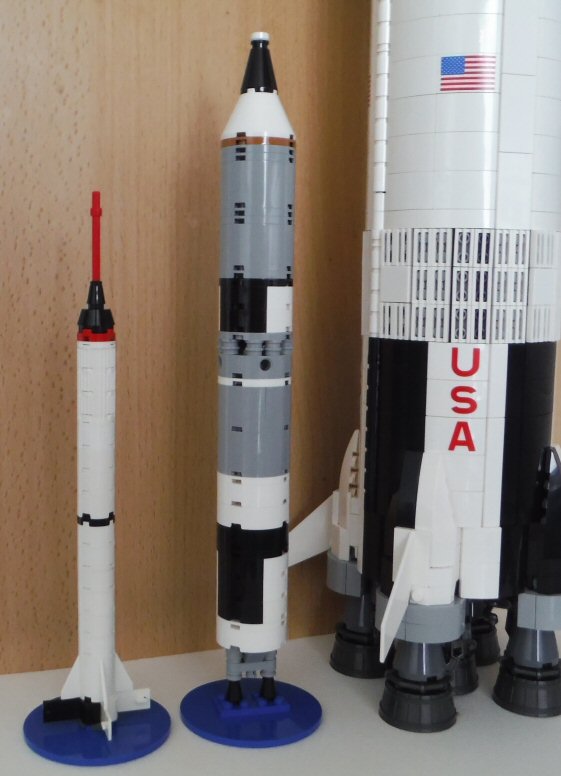 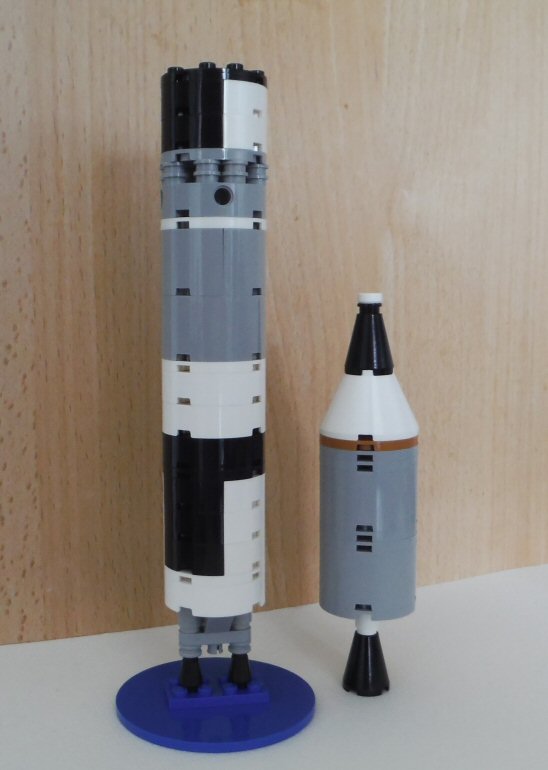 Here are the instructions to build a 1:110 scal Gemini-Titan rocket. It has been test built and as always there were a few surprises. Firstly LEGO have never made the 4x4 round brick in medium grey, model adjusted to maintain the correct height using alternative parts. I needed to adjust the order of plates and bricks as it actually made a difference where they attached to the lower black and white section. The model stood up just using the rockets, I really thought it would need additional support but the two engines into the 4x2 plate is secure enough not to need them.

The second stage will separate if it is rocked gently just above second black and white section. the capsule is held on in a similar way to the Apollo CSM - the cross bar helps keep the capule in one piece as it is separated.

Note - the drawing shows the slighly shorter stick than called up in the parts list - this was a limitation of LDD which would not let me push the stick inside the 4x4 round brick. The part number is for the longer 'lightsaber' stick and this should be used. The colour of the sticks are not critical - you can only see the end of them if you look inside the engine bell. 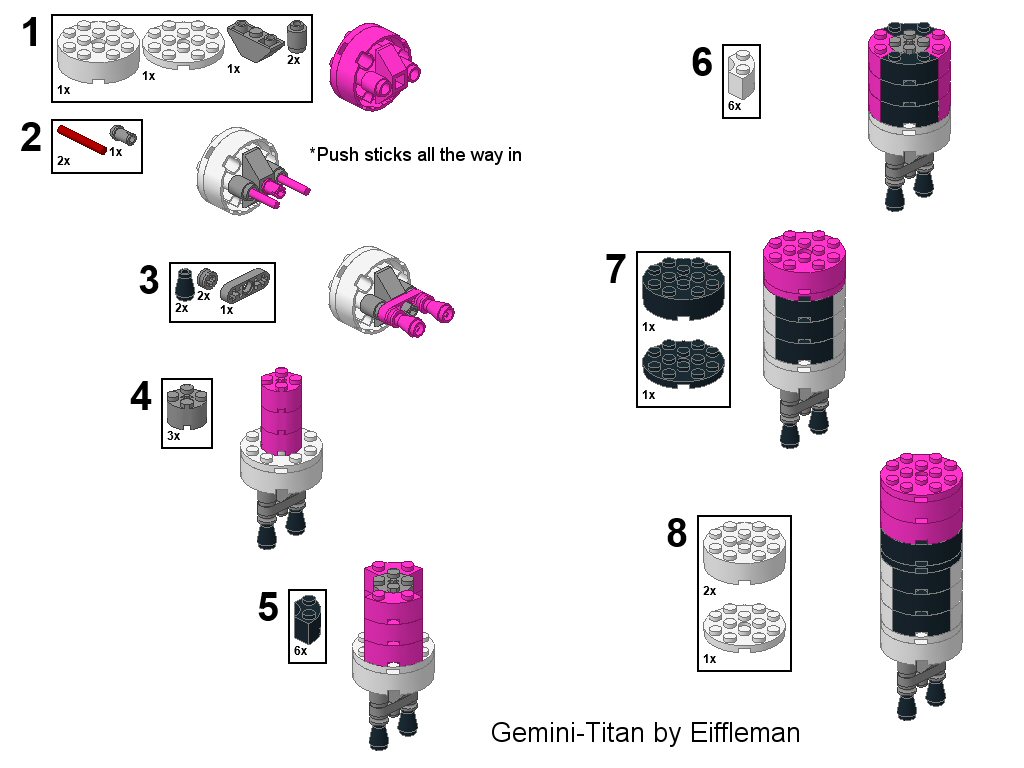 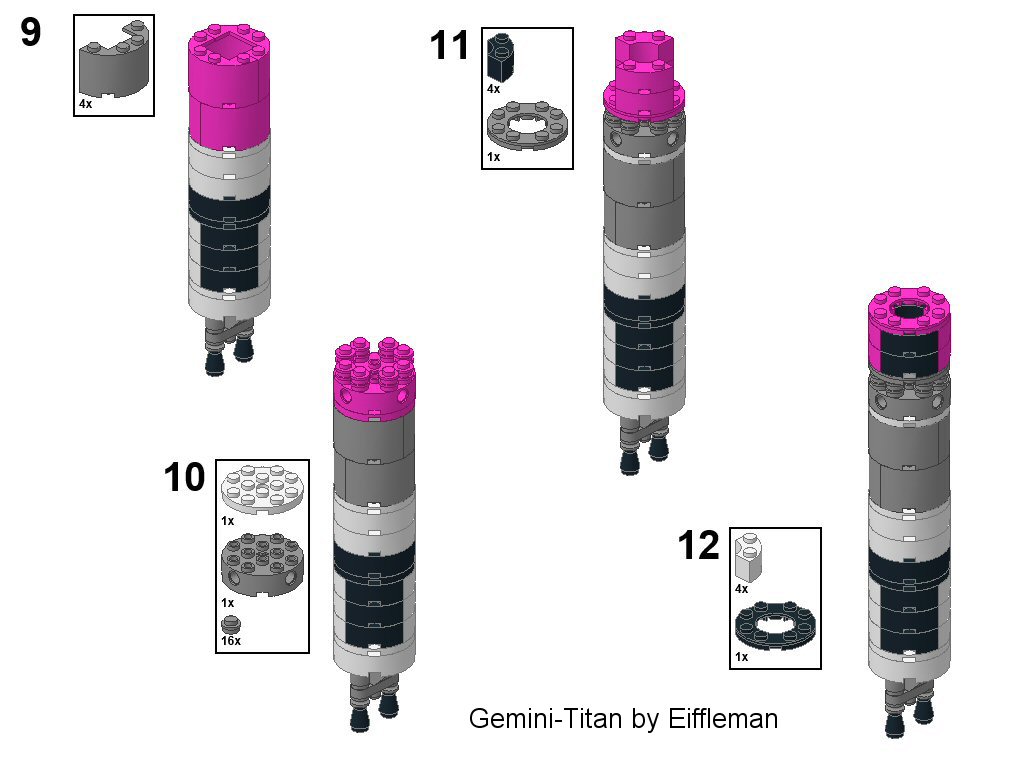 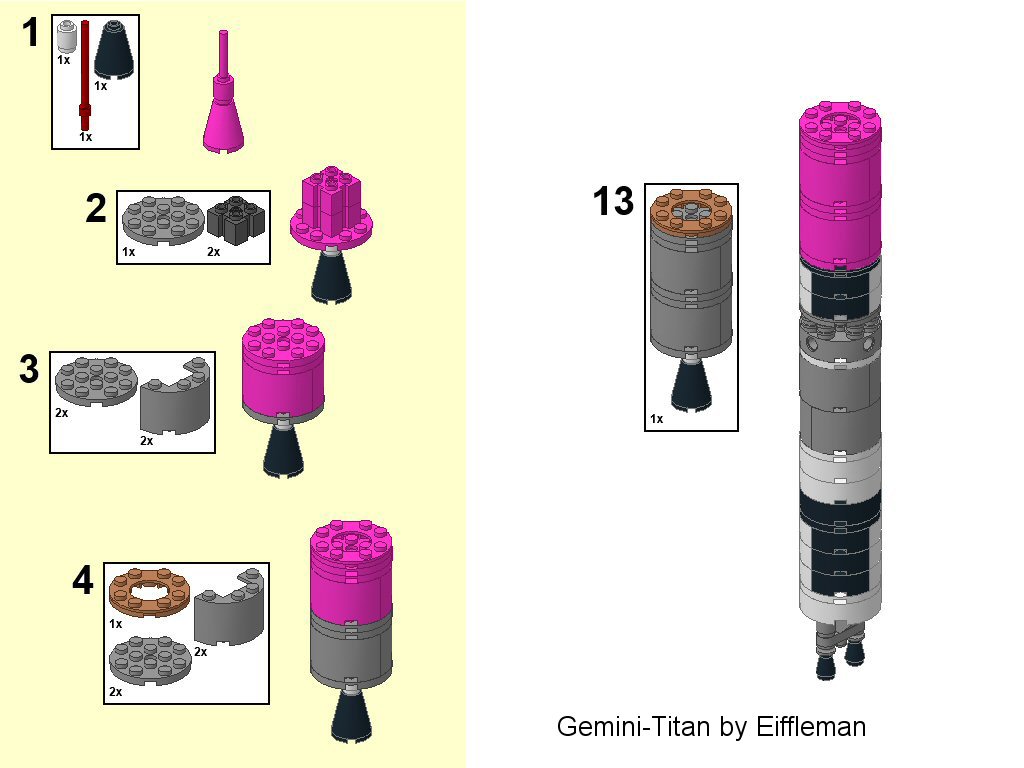 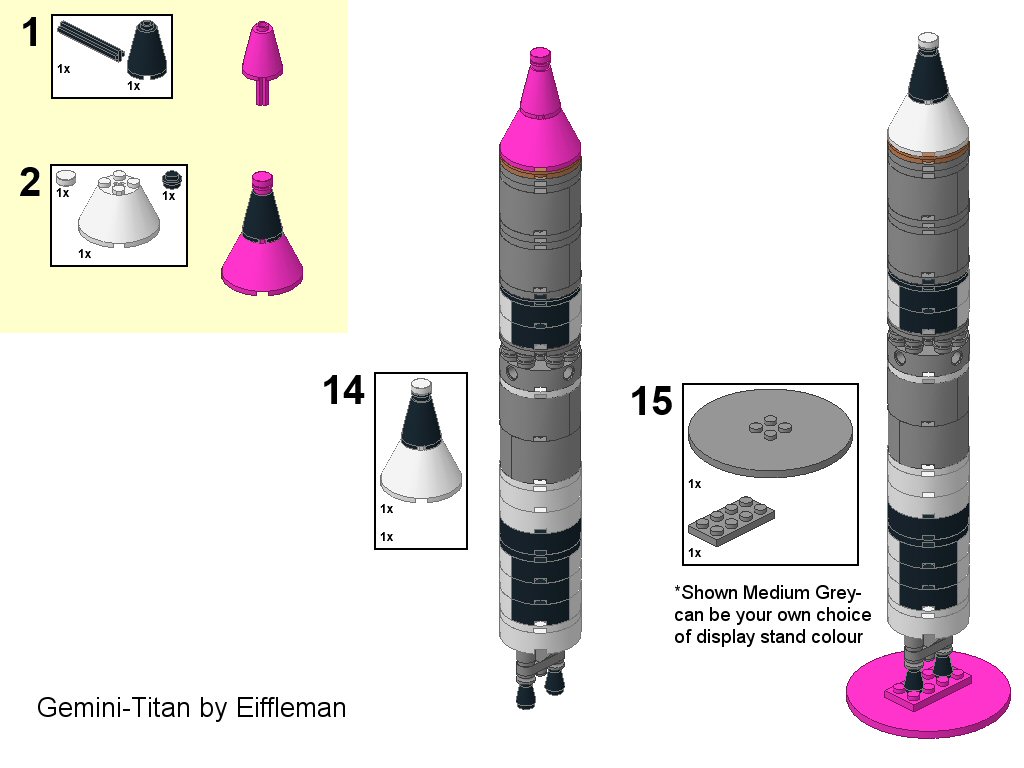 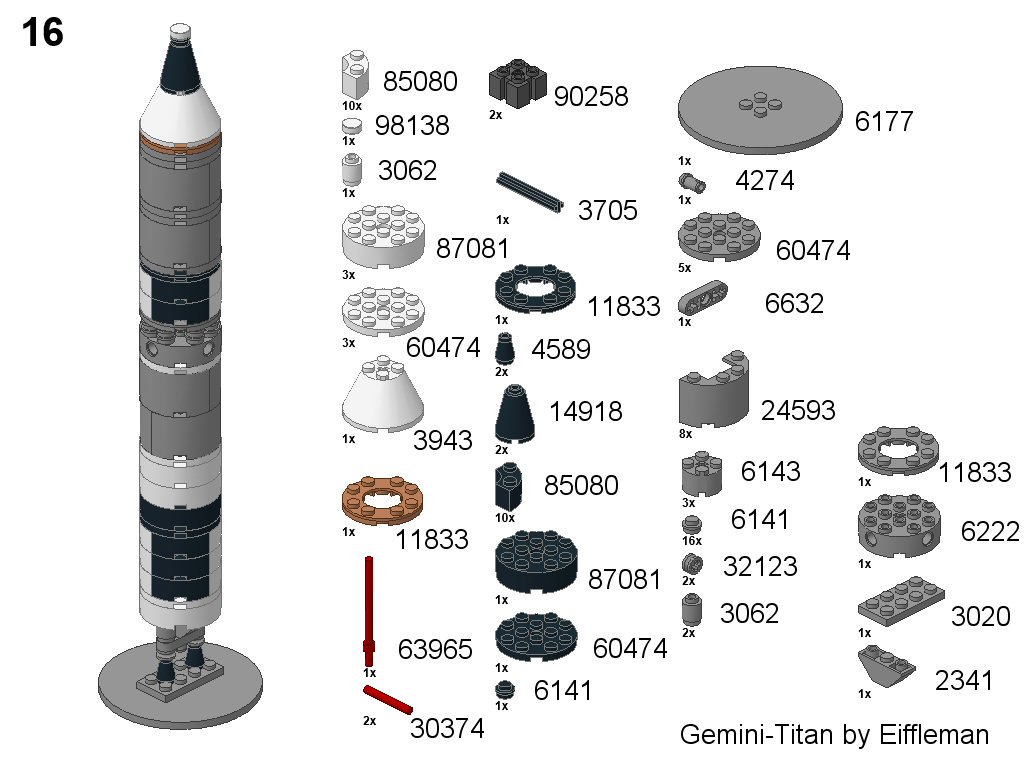 Thank you to everyone who has supported my NASA projects. Gemini-Titan building instructions are being prepared and will be posted once I have completed a test build (90% made up already). Parts are on order so I should be able to post a picture of the completed rockets very soon.

These are the building instructions for the Mercury Redstone. It has been test built (in odd colours). I have mine on a bright blue disk, the same colour as the supports for the Saturn V Stages, but was told it looked like it was standing on water. I have shown it in these instructions on a light grey disk. (your choice of colour)

Thank you very much for all your support. 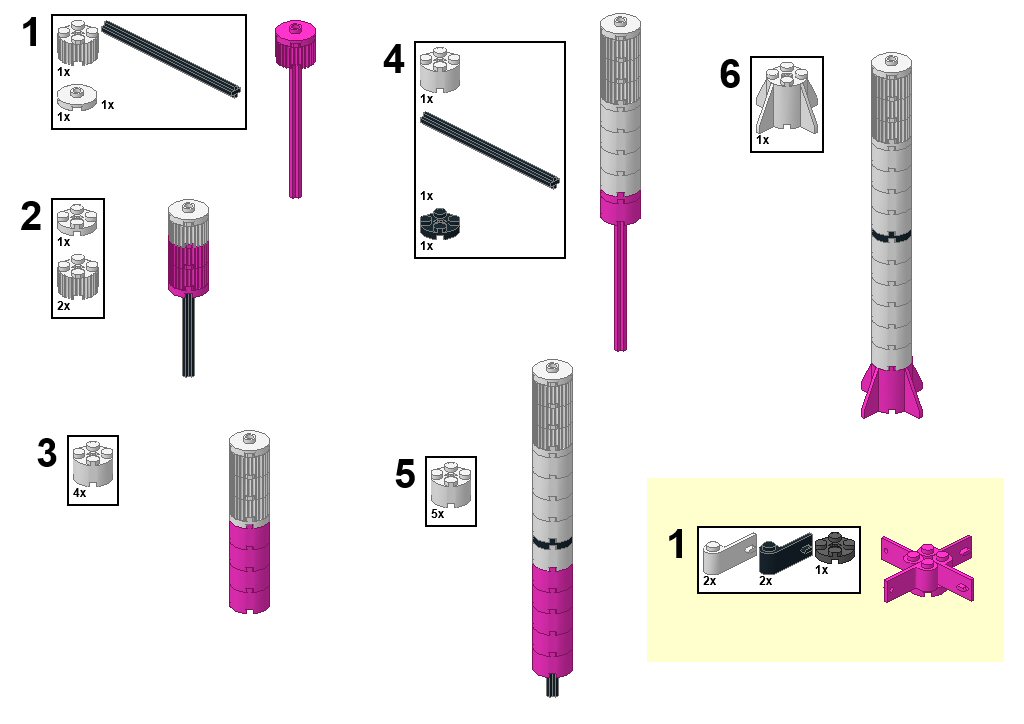 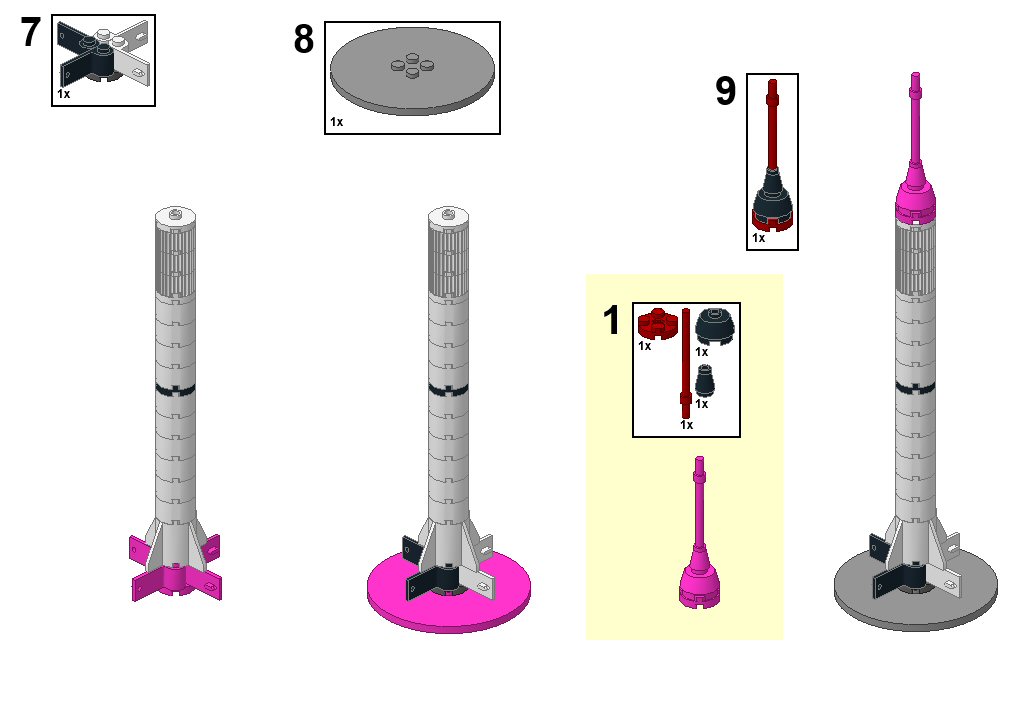 One important rocket from the Mercury program was missing from my initial submission. The Mercury Atlas rocket which took John Glenn into Earth orbit on 20 February 1962. Why was it missing? - the rocket has a half stage (the white lower section of the model) and I struggled creating a design which would allow it to be jettisoned - the lower section with the two outer rocket engines separate and the centre engine is attached to the upper stage.

There also has to be a compromise at the top of the rocket stage, the cone really should to be made in two pieces- ideally from cones which go from 2x2 to 3x3 and then 3x3 to 4x4, unfortunately the second cone does not exist in the LEGO range.

In addition to the new model I have included trophy figures in silver for the Mercury Astronauts, Alan Shepard & John Glenn with the white suits of Gemini Astronauts, 'Gus' Grissom and John W. Young. 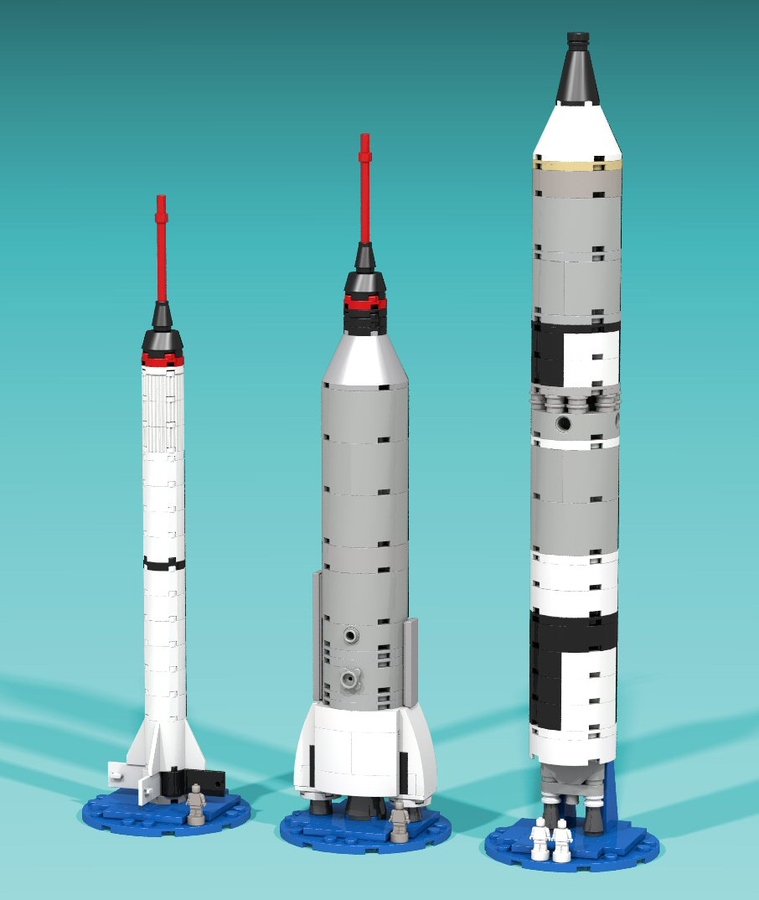 Here is a render of how this set would look next to 'Little Joe II', a Saturn 1B, the Apollo Saturn V and Skylab. 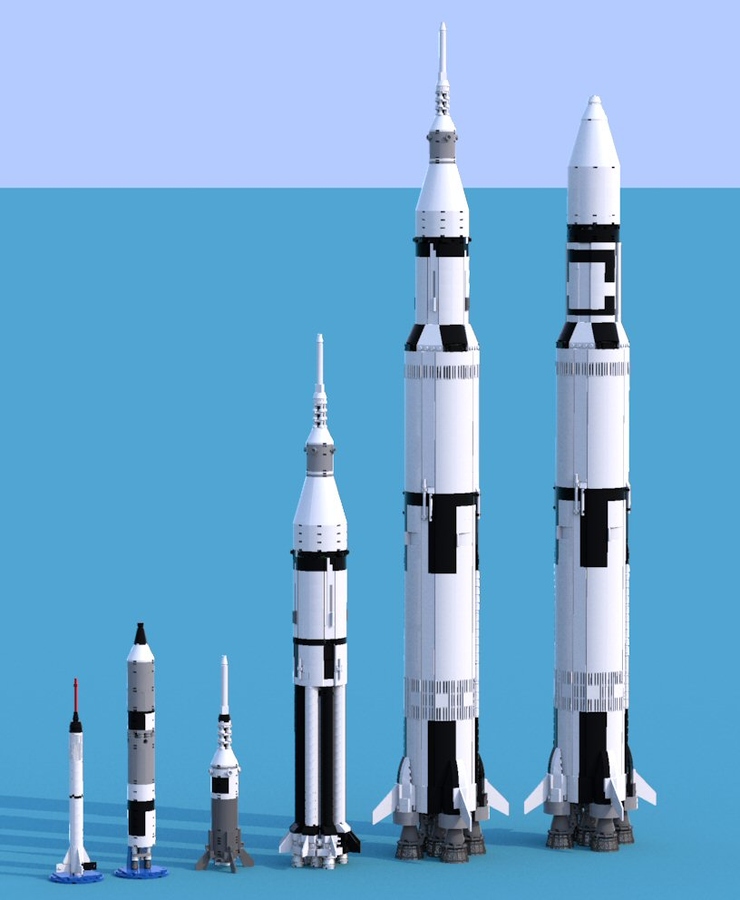 So far I have built 'Little Joe II', the Apollo Saturn V and the Skylab upper stage.

I posted the building instructions for 'Little Joe II' as a bonus update with my NASA Crawler-Transporter project. You can find it here - https://ideas.lego.com/projects/0f8efc2a-ce0a-4285-9f2b-036bf3eb9f38/update...