Build Notes - Initially I made the boosters with attachment points at the top and bottom of the booster. However, when I pulled  the Booster from the rocket this tended to loosen the connections around the middle of the booster and I was always pushing the booster back together. The solution was to keep the two connections close together towards the botton of the rocket. You may also notice that I have used the quarter circle pieces on two layers which are one colour. I thought I could just use a 4x4 round brick for those layers but this turned out to provide a much weaker connection than the quarter circle pieces and the booster tended to break at the connection. Using the same build technique throughout the whole booster stops this happening.

The boosters feature two large Thrust Vector Control tanks on the side. For the connections I would recommend new pieces (snaps and the pistols) I had a few pistols in my spare parts and some gave a stronger connection than others - but I know that some of mine had spent a few years held in clips and this may have very slightly deformed them. It is the shorter 'hand grip' connection which can be loose. I used new snap connectors too to make sure I got the best connection possible. 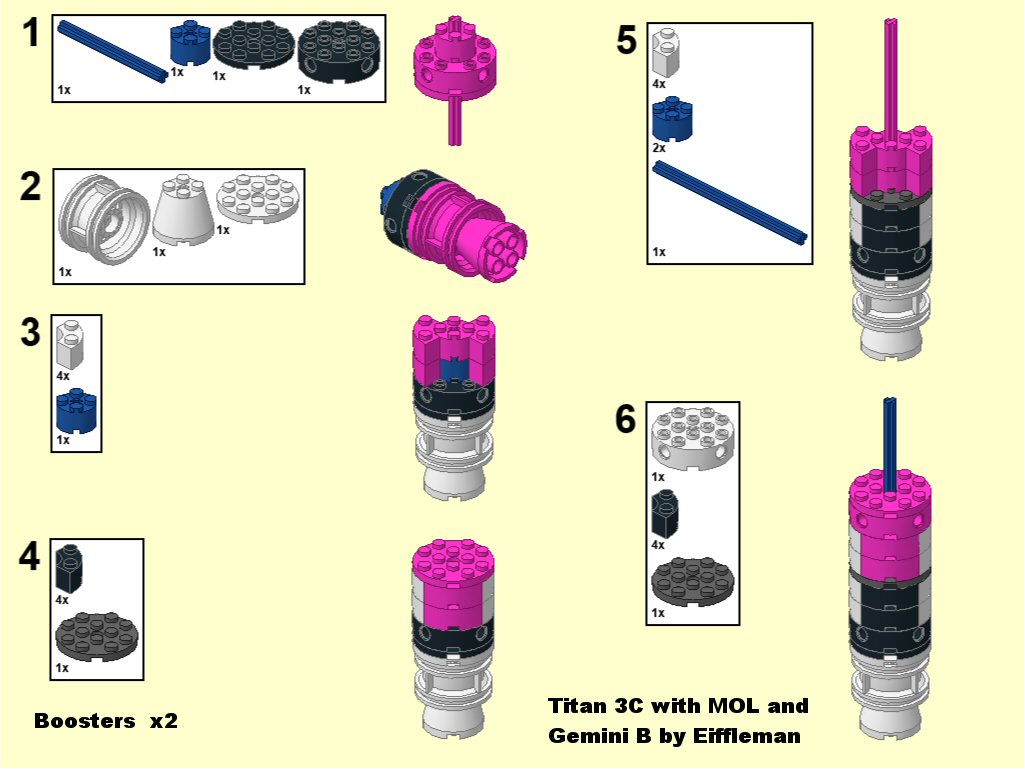 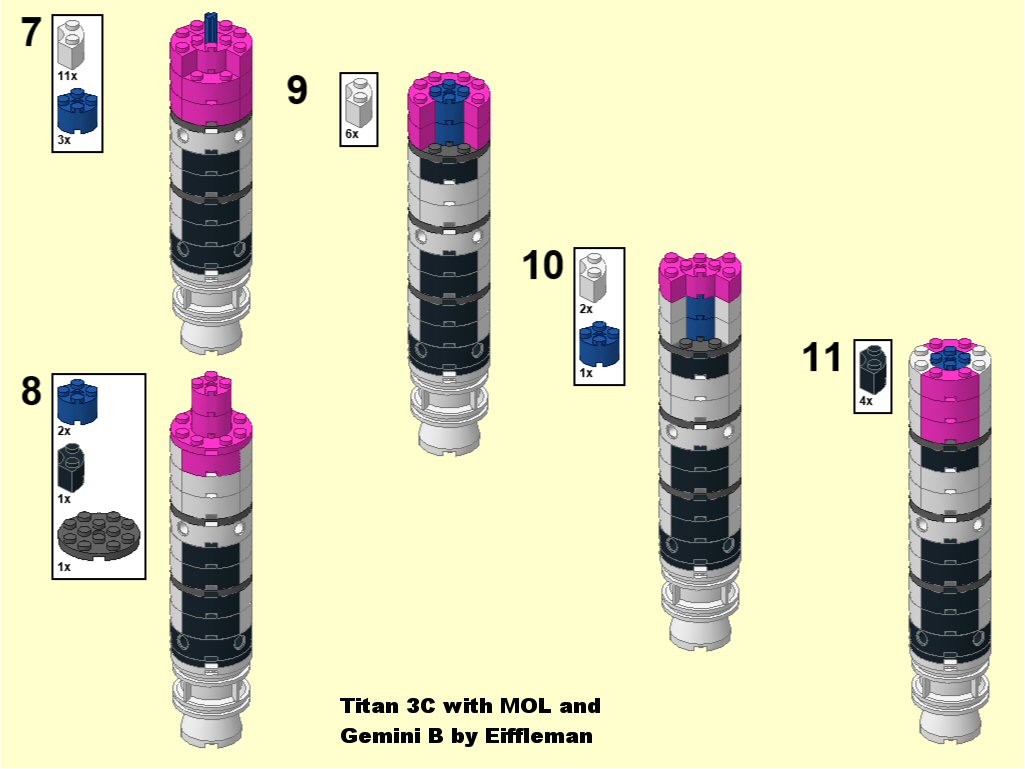 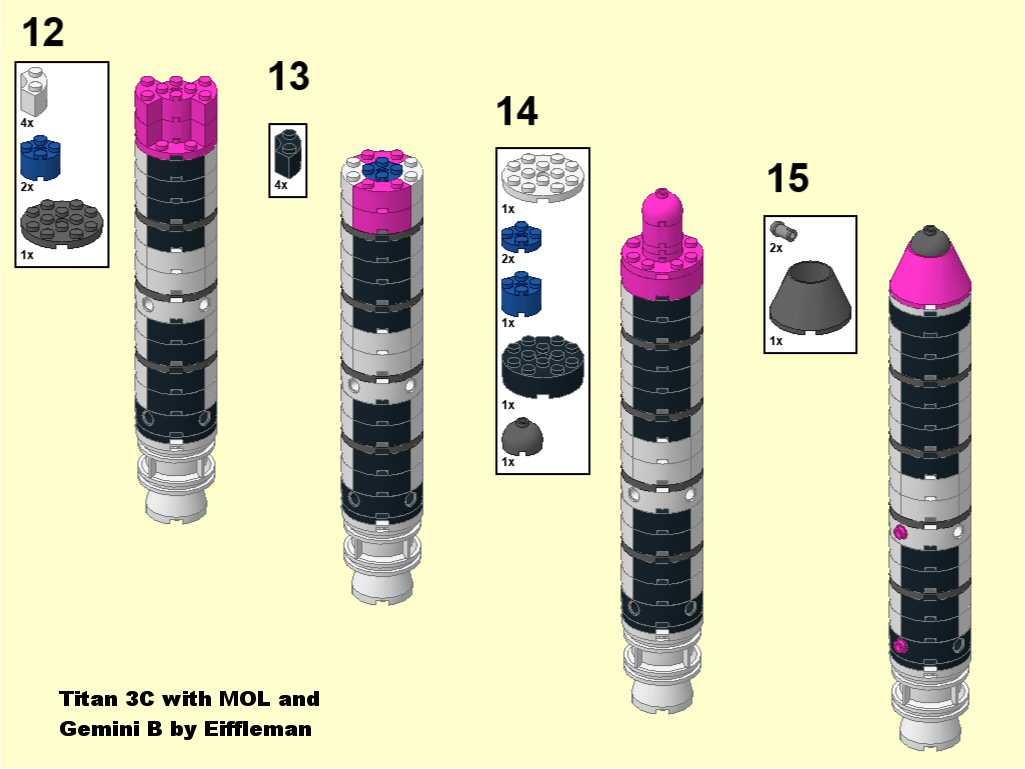 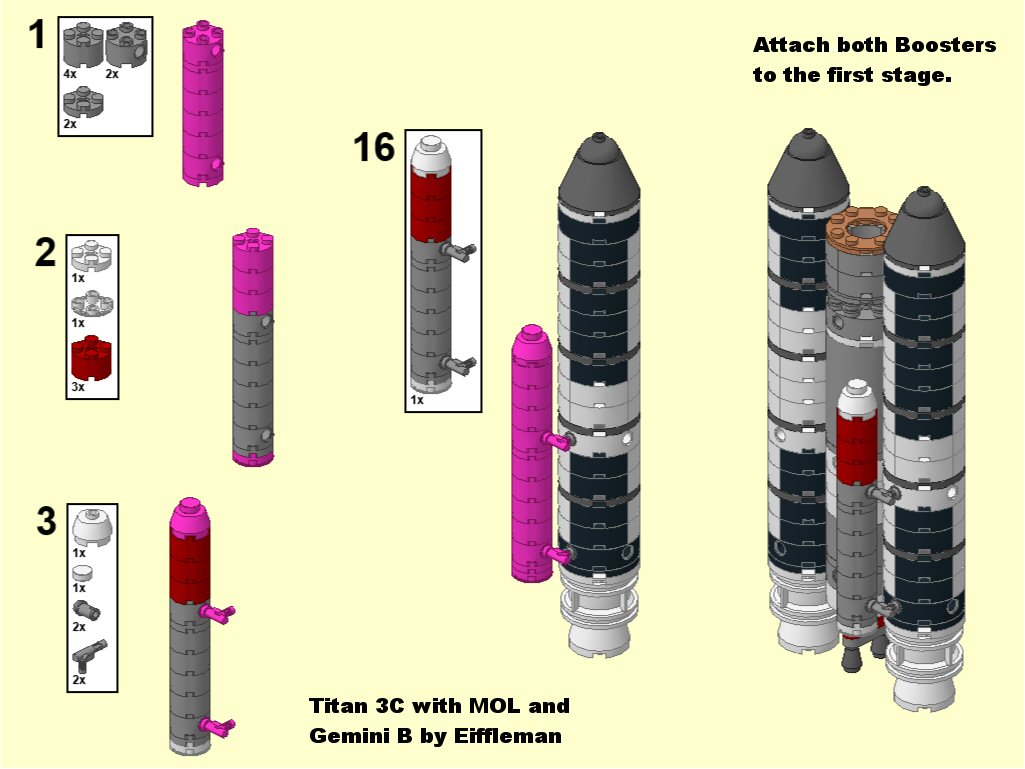 My interest in the X-20 space plan led me to building a boostered Titan, unfortunately the X-20 was cancelled before it ever flew and there are only artists impressions of what it would have looked like on the Titan 3C. Then I found out about the Manned Orbital Laboratory project which got as far as a test launch on a Titan 3C. The launch took place at about the time the X-20 would have flown and I the configuration and colour scheme of the rocket likely to have been how an X-20 rocket would have looked. As I have tried to be as accurate as possible I have built this model as the as launched MOL and Gemini B which was launched in 1966.

Build notes - The first stage build is very similar to my Titan II build. With the boosters there is a side force put on the model when they are removed and there is some additional strengthening to stop the lower half working loose. The rocket is also quite tall and when 'swooshed' there is a lot of weight on the join to the upper stages. The addition of the 4M axle with end stop strenghens the connection and stops the model splitting when played with. 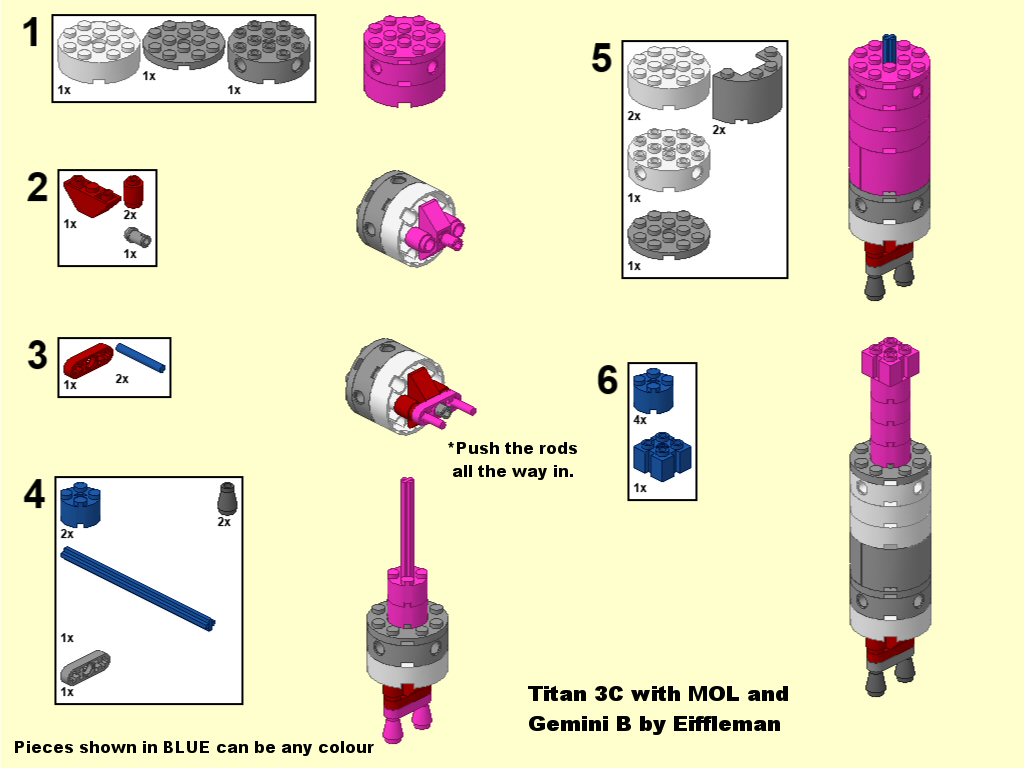 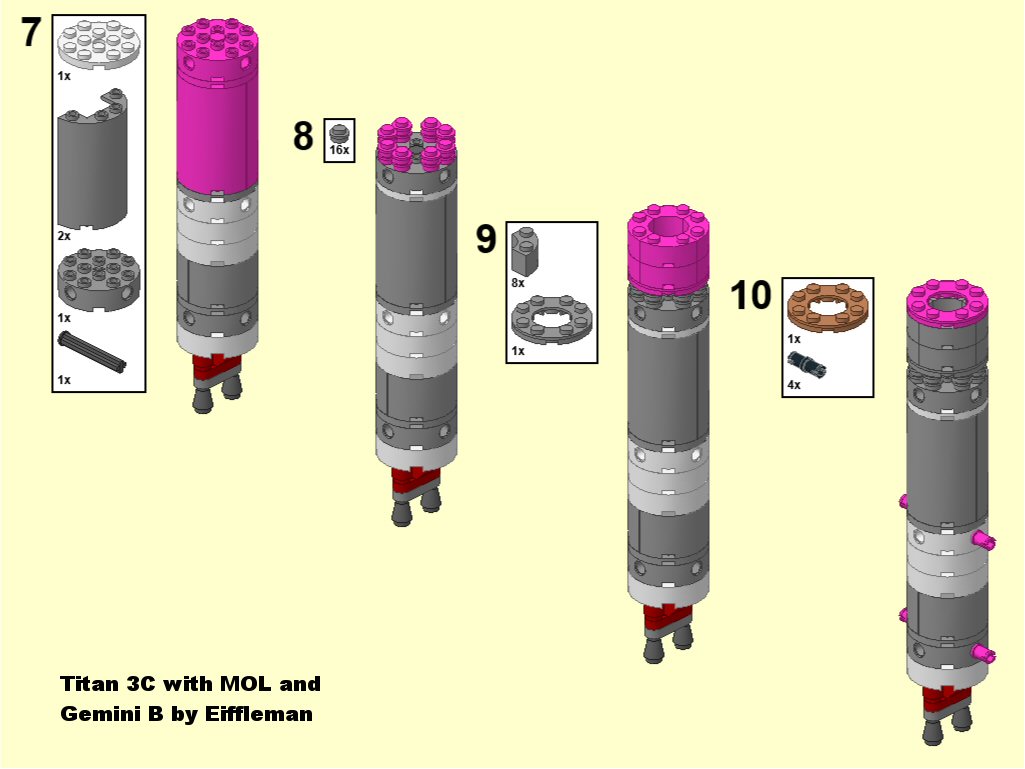 Slightly different approach this time to the parts where the colour does not matter as they are hidden in the completed build. In the plans these are shown in BLUE but use any colour you have or can buy cheaply. Some pieces in certain colours are 'rare' and can cost quite a lot more than 'common' ones of the same shape. I hope this helps but please post a comment if this affects your build experience, good or bad. 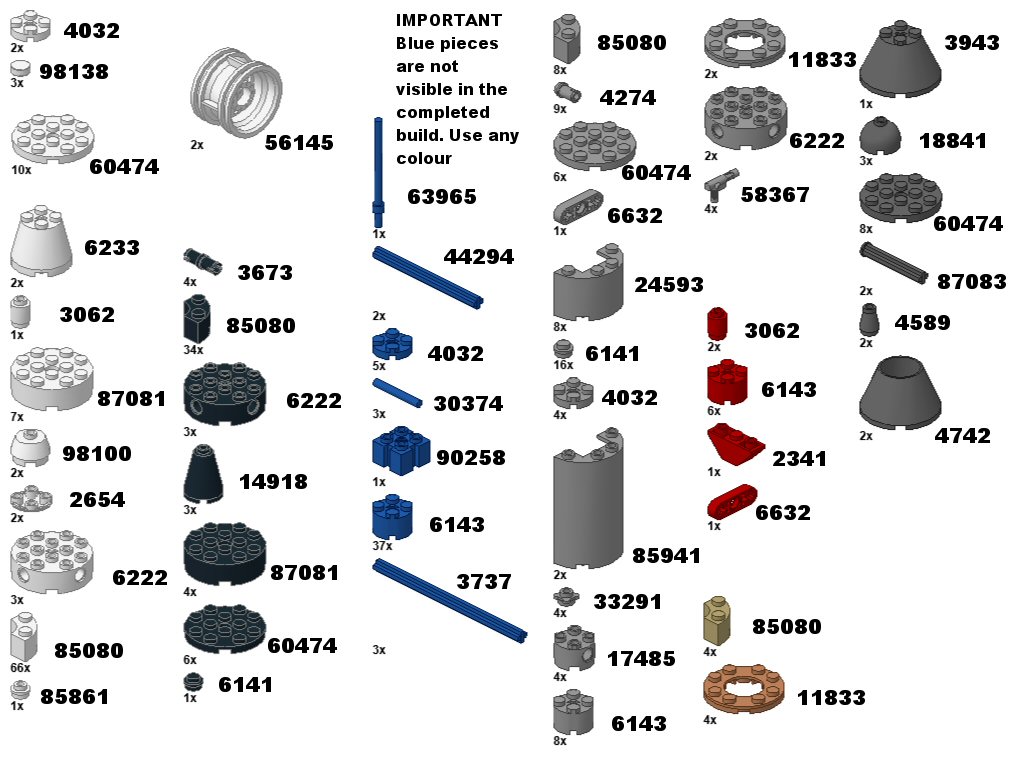 I have been looking at some of the space projects being developed in the 1950s and 60s. The X-20 space plane was cancelled before flight and space testing began but another project went as far as a test flight of the modified Gemini capsule (a Gemini B) and a mock-up of the Manned Orbital Laboratory. Funding and the success of unmanned surveillance satellites led to the cancellation of the programmes.

In 1966 a Titan 3C launched the Gemini B and MOL into space. The Gemini B had a hatch through its heat shield so that the astronauts could move from the capsule to the MOL and one purpose of the test flight was to prove that the heat shield would still work with this change.

There were a few challenges with the build and it proved necessary to make several changes from my original LDD design to ensure that the built up model would remain intact when played with. I will post building instructions and highlight the issues with making up the model. 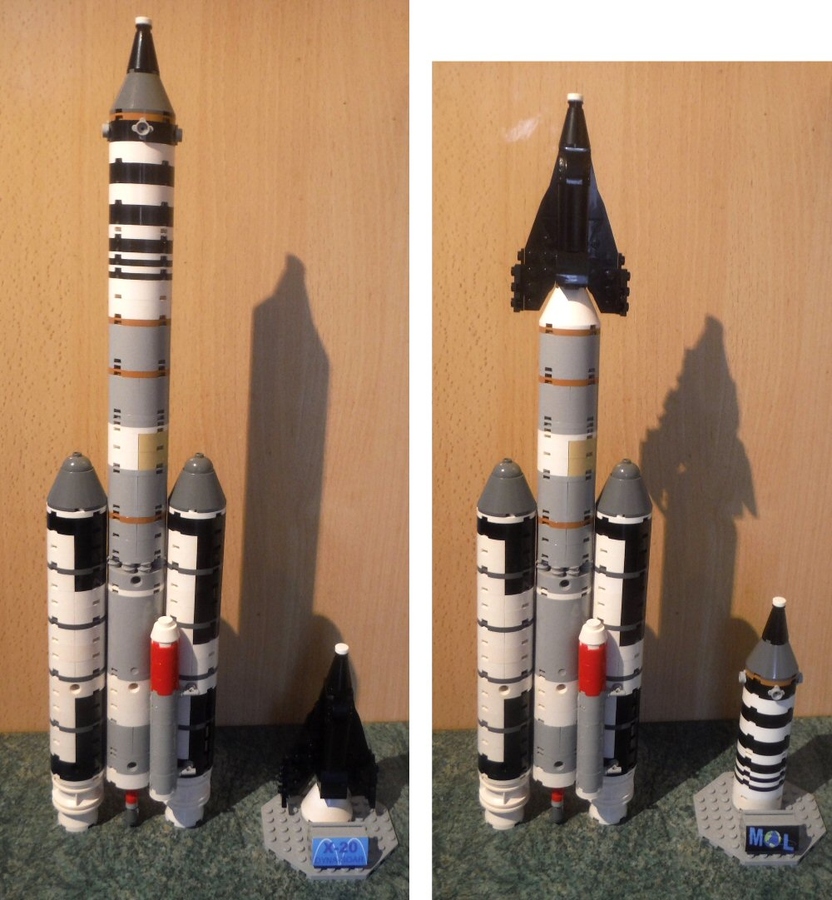 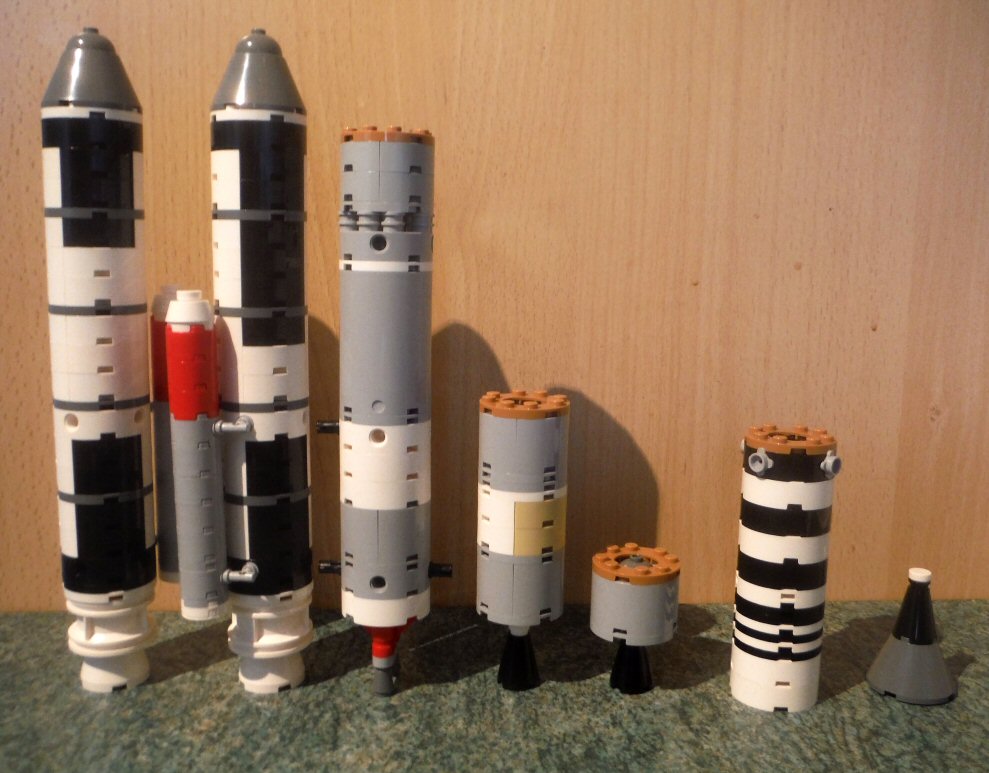 Having managed to find a way of attaching the Thrust Vector Control tanks to the boosters I have designed a 1:110 scale Titan 3C. This model will suit the launch of the Manned Orbital Laboratory (MOL) or the X-20 Dyna-Soar. Like the X-20 the MOL programme was scrapped, however, there was at least a launch. While in orbit the MOL would have remained attached to the Gemini B. Similar to the earlier Gemini capsules the B version had a hach to allow astronauts to transfer between the capsule and the MOL. At the end of the mission the MOL would have been jettisoned and the astronauts return in the Gemini. 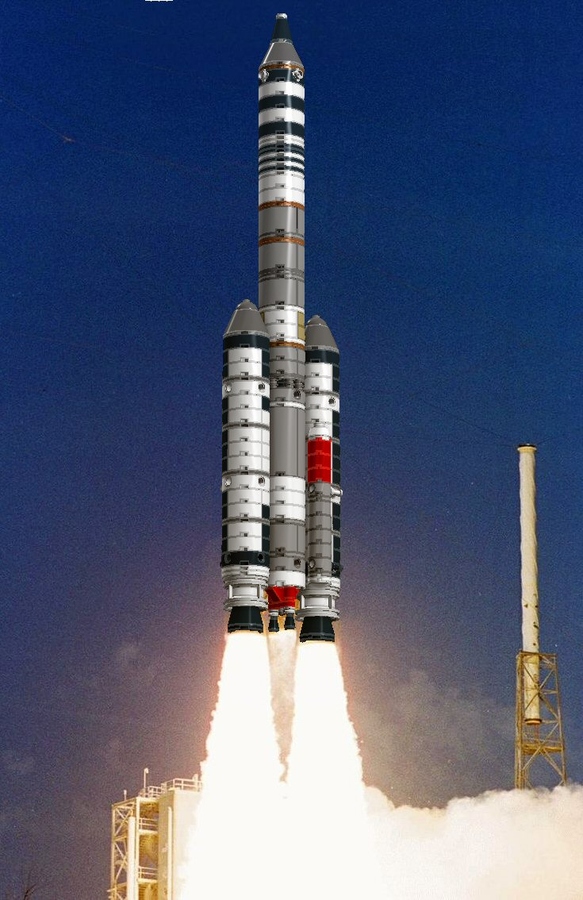 test build next, instructions to follow. Thanks for your support.

Missing from my boostered Titan is the Thrust Vector Control Tanks which added a direction control system to the solid fuel boosters. Apparently designed as part of the X-20 project the system remains part of the Titan and can be seen in photographs of the Voyager launches.

I was stumped as to how to attach the tanks and they did not feature in the artist impressions of the X-20 launches. However either the tanks or large fins would have been needed to control the rocket's flight.

Luxordeathbed is working on a Voyager model and came up one means of attaching a tank which made me look again. One key feaure would be to keep the ability to go throught he stages of the flight and be able to easily remove the boosters

I have mocked up a tank (using a couple of Astromech bodies -thanks R2D2) and have found a method of attachment which appears to work (the connection was strong enough just to have the two connection points). Next stage will be to make it up as designed and if that goes well I will add build instructions. 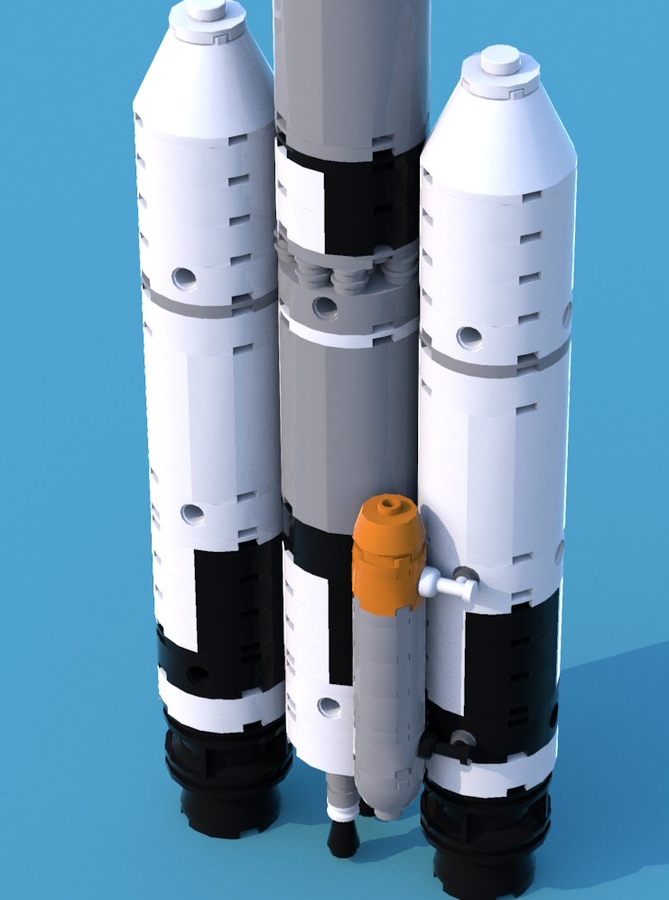 The Titan rocket was developed as a launch vehicle and boostered versions notably launched the Voyager probes and Cassini. With a little modification the Titan can have boosters added, with black friction snap connectors giving a solid connection to the rocket but still easy to jettison. Suitable parts for the payload fairing exist but not in white, so for this update my rocket has the X-20 Dyna-Soar as its payload. The X-20 project was very advanced with astronauts selected and production underway when Americas attention was redirected at putting a man on the Moon. The project proposed several launch vehicle configurations, including a winged Titan for sub-orbital flights and a boostered Titan to achieve orbit. There are some interesting videos about the X-20 on YouTube. 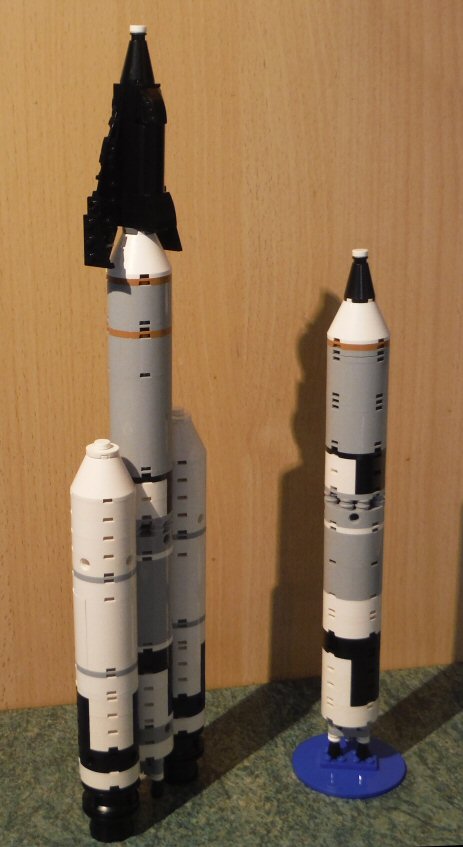 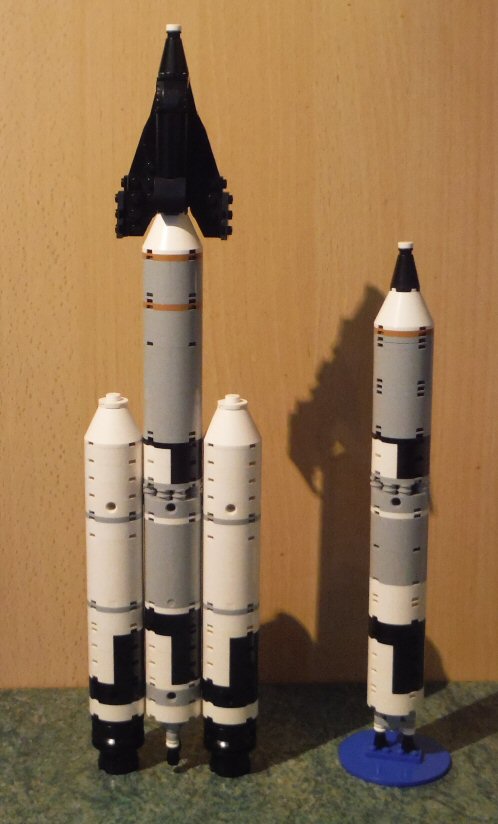 As part of the Rocket Gardens update I included the 'Little Joe II' rocket on its launcher. I have been asked about the build instructions for the it.

NOTE: Many thanks to Wolvesfan08 who let me know that they were unable to get the yellow 14719 (the 2x2 right angle tile) shown in step 5, and suggested  substituting with 2 yellow 3069 and 2 yellow 3070 (1×2 and 1x1 tiles). This would be an acceptable substitution and I recommend placing the 1x2 tiles across the plate joins to make the build as strong as possible. My process for building is to first go through my boxes of bits and then use the secondary market to complete the build. In this instance I had the yellow right angle tiles in my bits box.

This is a more complex build than the rockets, the finished model is sturdier than it looks but is intended for display rather than play. There are a couple unusual connections and you may find it easier to take off parts of the build as you make adjustments. There are notes on the instructions to help with the trickier parts of the build. Hopefully the photos of the finished model will also be of some help.

The real launcher has a lot of girder work which I have tried to respresent the best I could in LEGO, there are limitations with the available parts, but I have tried to capture the main features of the real thing.

Finding that the crane jib parts fitted through the hole in the tower's platform was a very pleasant surprise.

The instructions for the 'Little Joe II' Rocket can be found in the NASA Crawler-Transporter updates section. 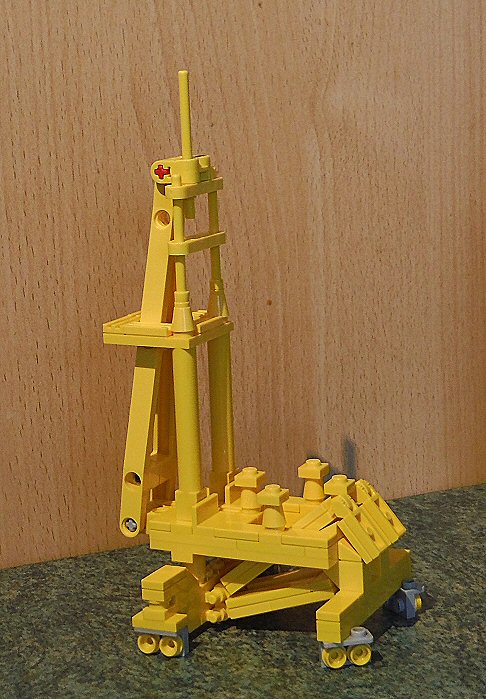 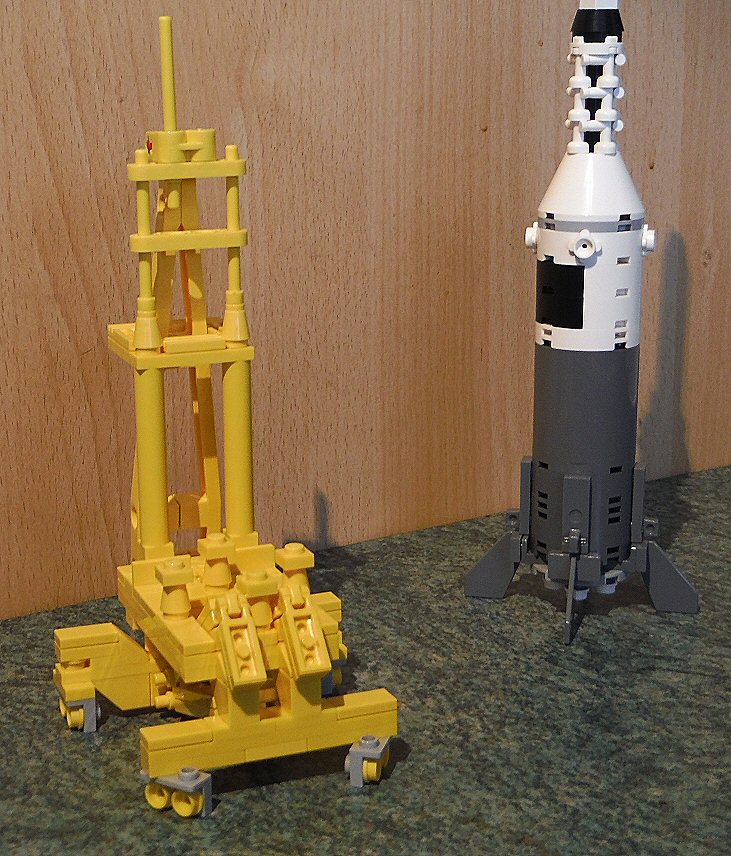 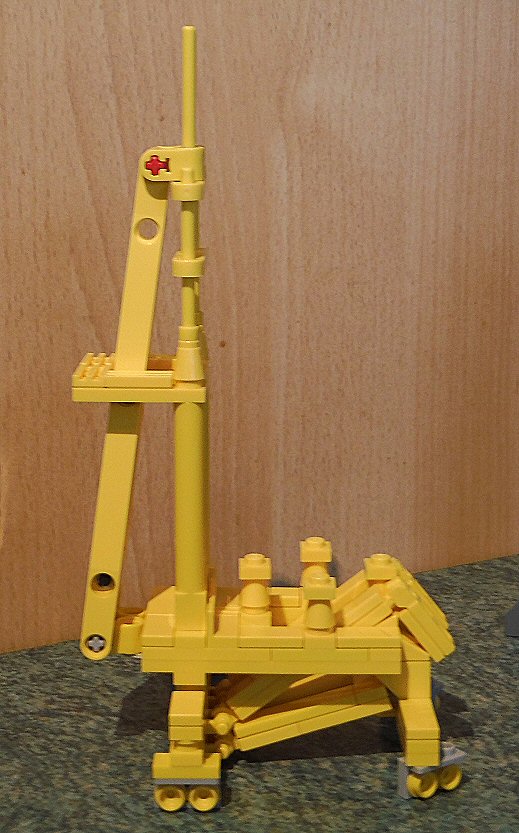 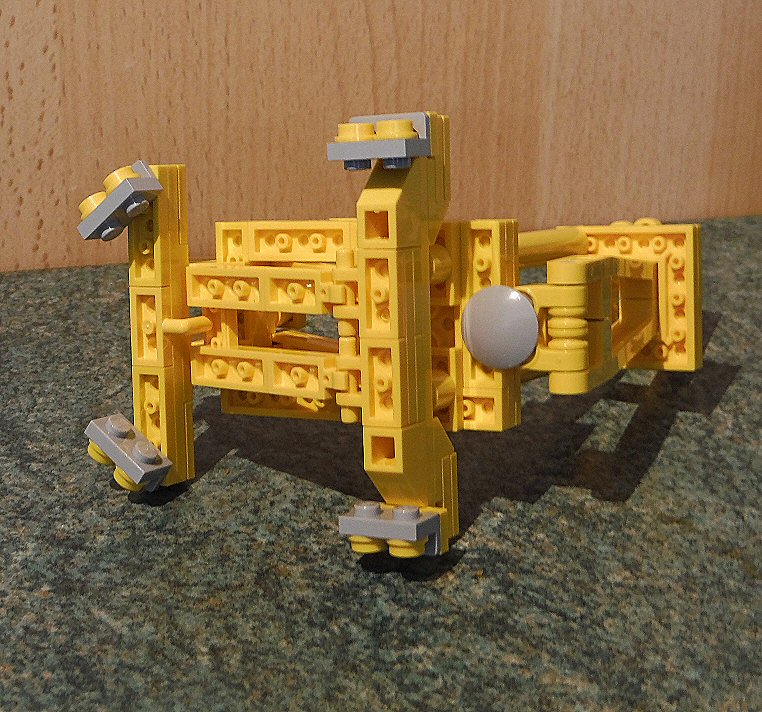 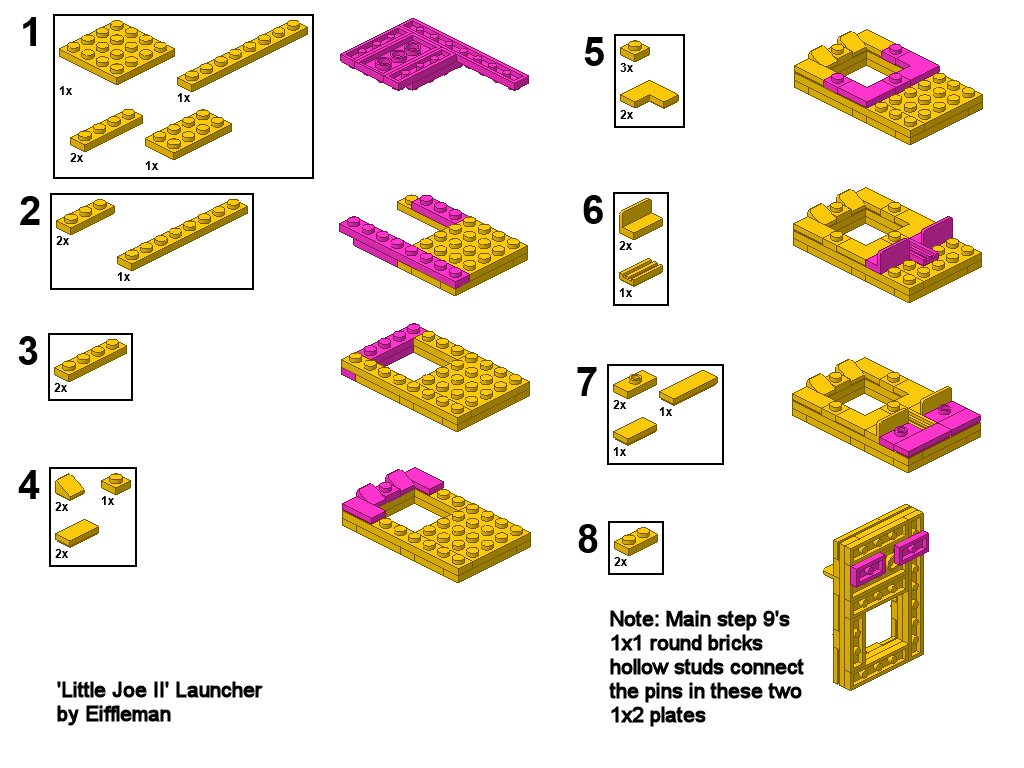 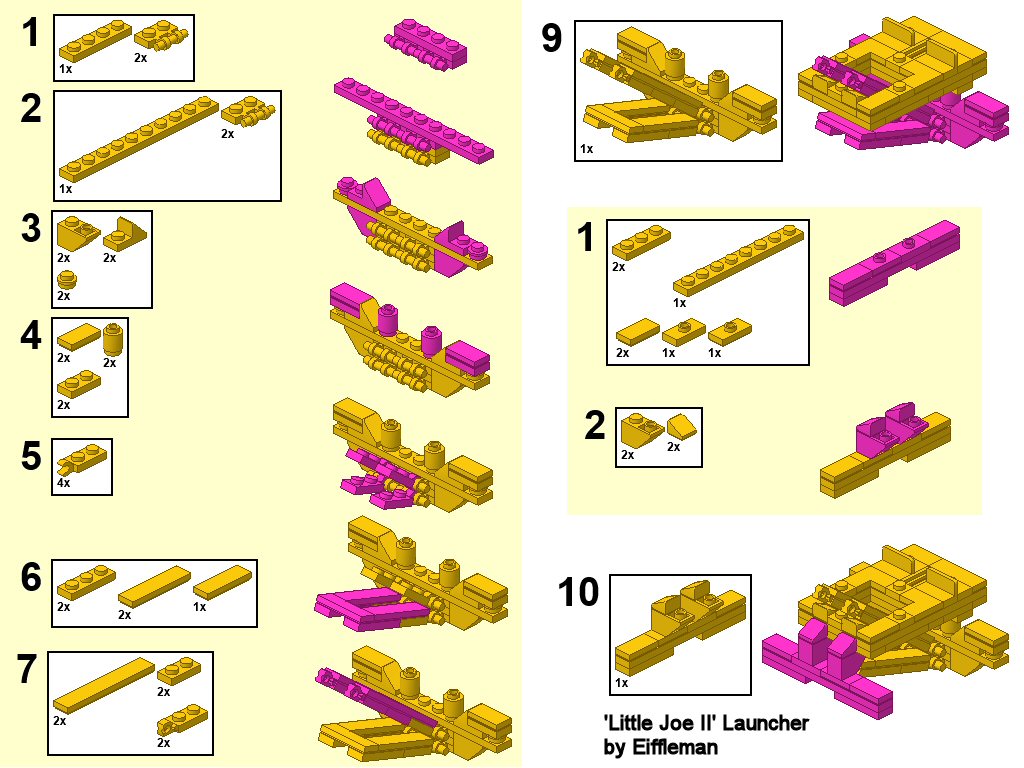 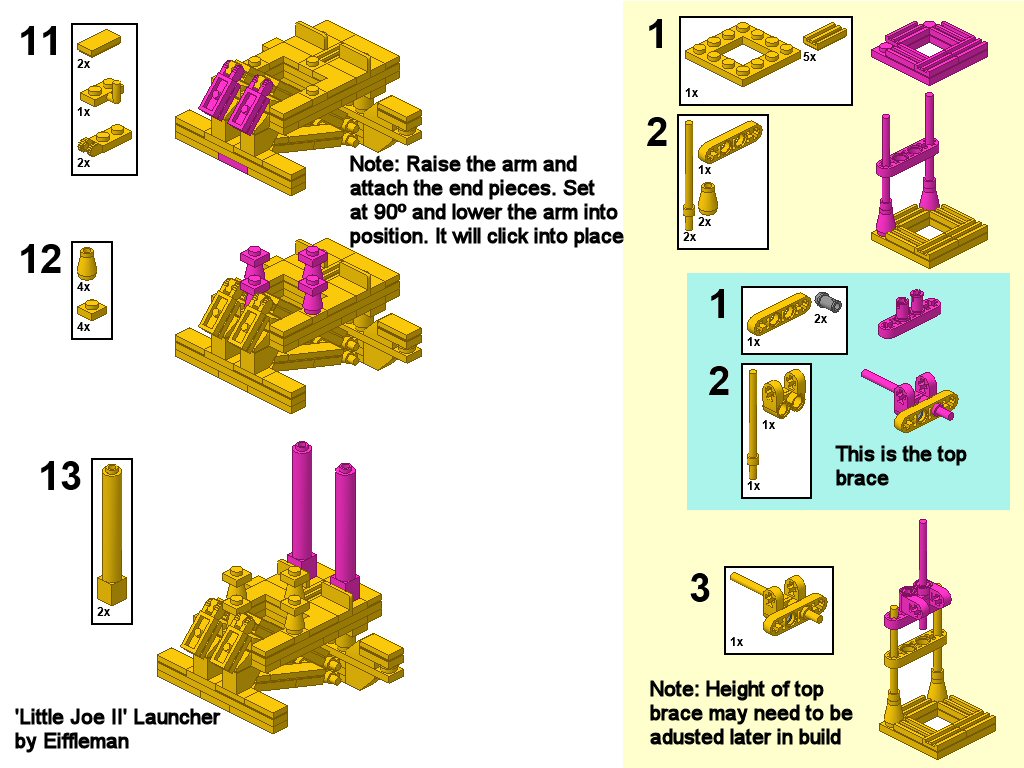 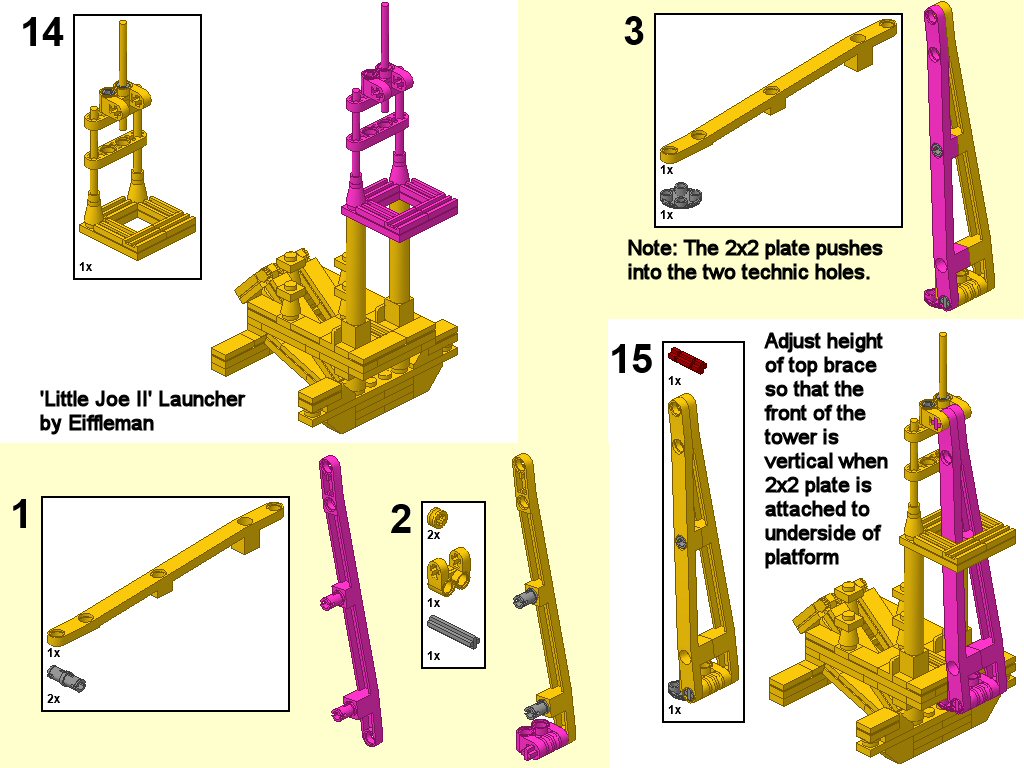 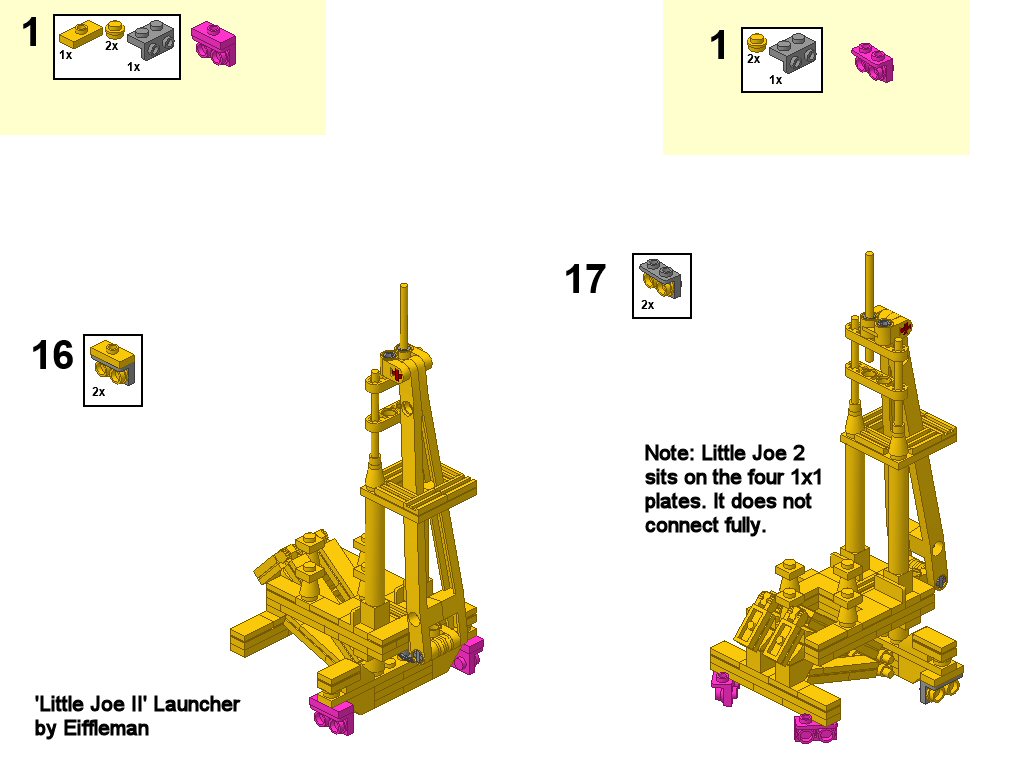 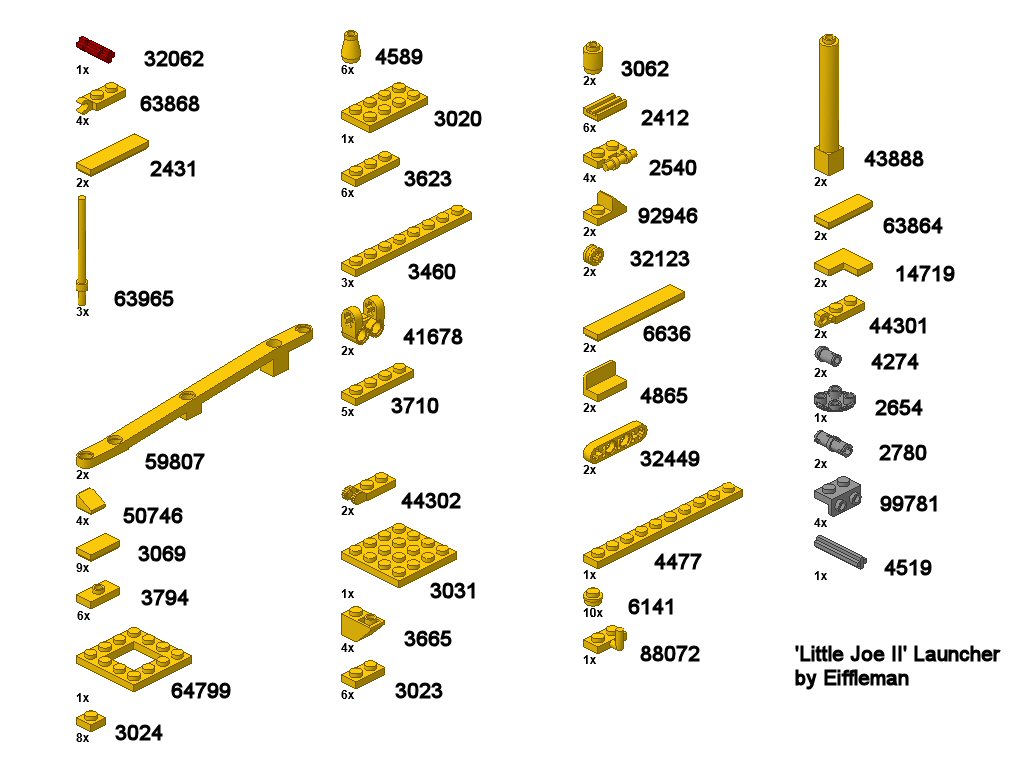 **Update 14/08/18 - Since writing this some parts have become available in the colours needed for this build. You should be able to get the Fez (85975) in Black and the Round 2x2 plate with one stud (18674) in Black - thanks to jgalak for posting a comment

To complete the range I have designed the Mercury-Atlas which has sufficient power to put the Mercury capsule into orbit.

I had to accept a few more compromises with this model than I would have liked, I have already said it would have been great if LEGO made a 3x3 to 4x4 cone which would have made the top of the rocket closer to the original. There were limitations with the available colours, I had to use a dark grey cone and 2x2 plate with a single stud (really never used in black in any set?), dark red fez was used as black has only just become avaialable and costs quite a lot on the secondary parts market.

The actual half stage is round with half cones on the sides to the two engines - no pieces exist to make tis up at this scale.

What you have is the best design I could make with a jettisonable half stage. 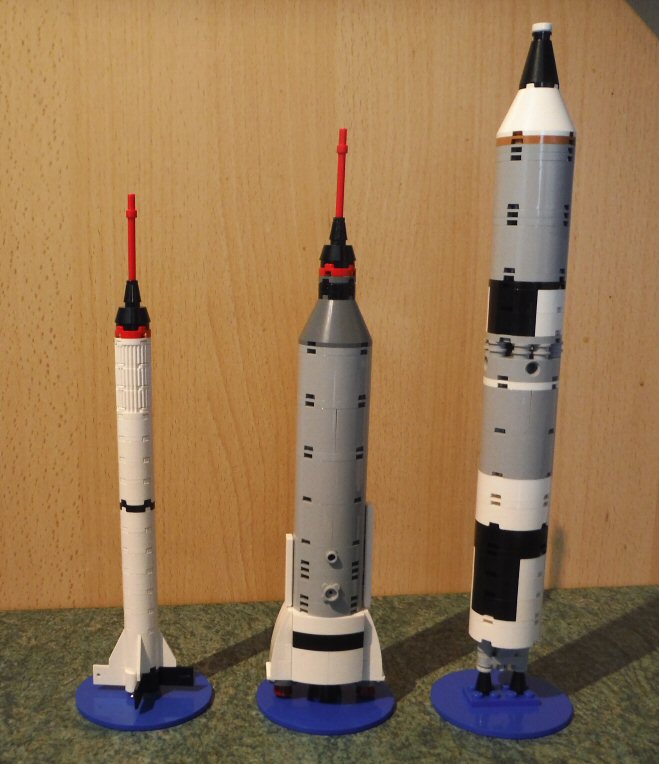 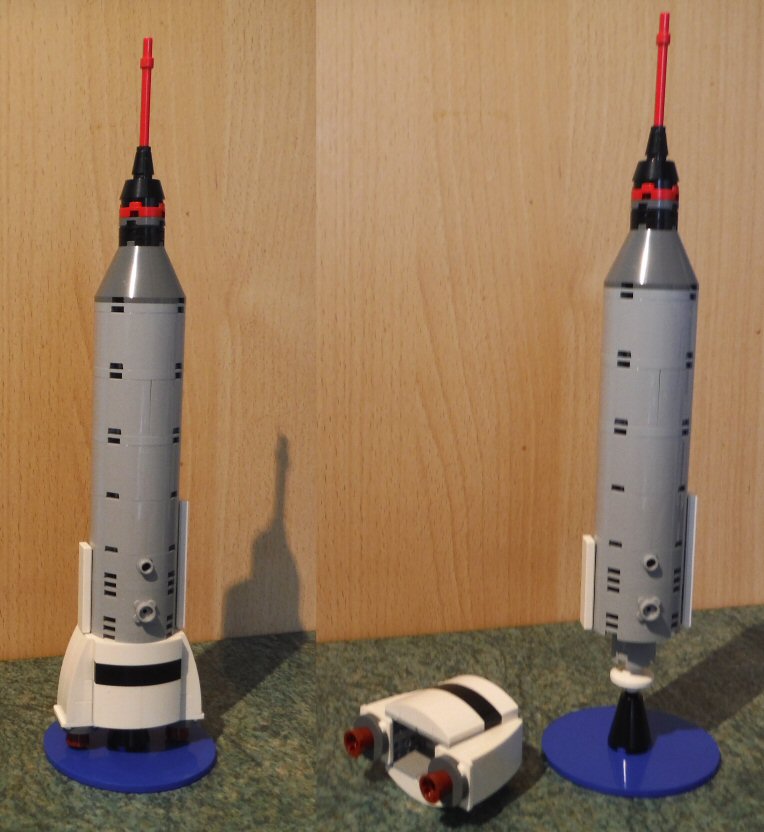 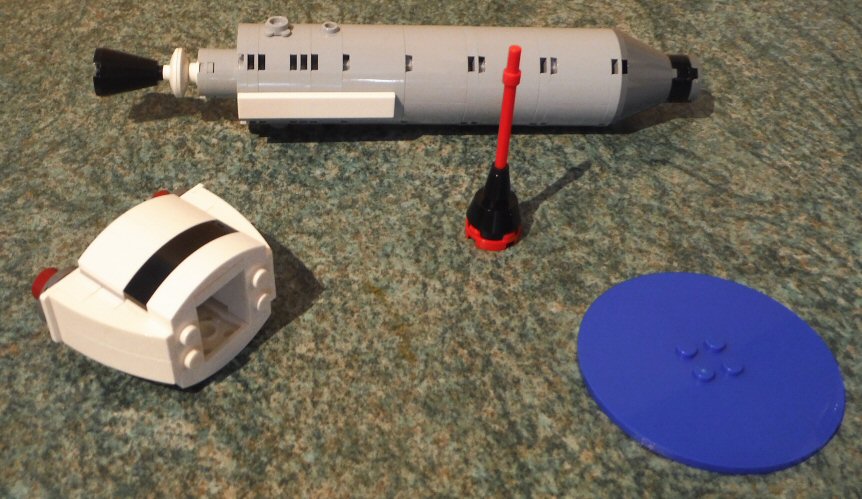