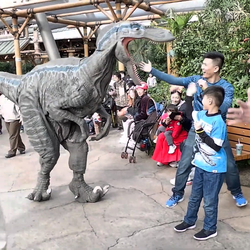 Following the same story as Andy’s Dinosaurs Adventures, Andy is the head of the Prehistoric Gallery at the National Museum. Andy has an assistant Jen and a new boss Mrs Pickles and the Janitor. Andy continues to use the Old Museum Clock to find a replacement piece for damaged exhibits but he now travels back to find other prehistoric creatures from different eras, not just Dinosaurs.

Tyrannosaurus, Wolly Mammoth and Smilodon (Sabre-tooth Tiger) are perhaps the most famous prehistoric creatures that guaranteed to become the LEGO® collector’s choice. It’s not only the ordinary T-Rex, my idea is featuring the latest version of BBC Tyrannosaurus.

Through 419 bricks, I hope the collectors will experience the journey to travel the time as Andy does. That’s why I will include two base plates that indicate the time different, woods theme for the past and museum for the present. Something that never been done before .

Thank you for your support and consideration. Terima kasih!