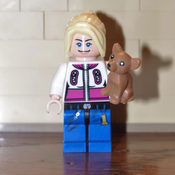 "Out of the night, when the full moon is bright, comes the horseman known as Zorro!" Elena waits near the watering hole to catch a glimpse of this bold renegade. Zorro, the romantic, stops to give her some flowers. Then he returns to his hidden lair where his friend and servant, Bernardo, waits. There is gold here. Is Zorro protecting it for the town, or is this some of his rich, alter ego's gold? Regardless, anyone who tries to steal from this sly fox will fall through the trap door! Later, Zorro will practice sword play in the master's circle. He must keep his skills sharp. Then he will mount Tornado and champion the cause of those who are downtrodden, leaving behind the sign of the Z!

I don't believe Lego has made a Zorro set. I think this one would work for those who enjoy the old Disney television shows and those who love the newer Zorro movies. Please support and follow if you agree.