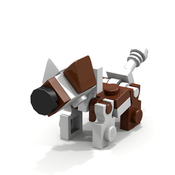 This is a model of the Nikon F3, which is considered by many to be the best film camera Nikon ever made. For those who aren't familiar with old cameras, the F3 was an SLR camera, SLR standing for single lens reflex. SLR cameras differ from the modern DSLR cameras many proffesional photographers use, in the way the record images. SLRs use photographic film to record images, which than needs to be processed in a darkroom. Modern DSLRs on the other hand, just like your smartphone camera, record images digitally, and allow you to display the images immediatly after you take them. Note that in this context, film does not mean video, but rather a thin plastic sheet coated with special chemicals that are sensitive to light.

I was not very familiar with film photography until earlier this year when I started photography class at my high school. I had used digital cameras in the past, but was intrigued by the process required for developing and printing images from film. Some people have told me they find the process tedious and combersome compared to digital photography, however I find film photography to be much more enjoyable than digital. I think this mainly comes from having to do all the work to develop and print images from the film myself, which usualy makes the final product more satisfying (though also more disapointing when it doesn't work out), but also from the way having only 36 exposures on a roll of film makes me think more carefully about each shot, knowing that I can't just take 20 images in rapid succesion and choose the best.

This model measures slightly larger than an actual Nikon F3, but not by much. An actual F3 measures (width x hight x depth) 149 x 97 x 66mm, while this model measures 165 x 109 x 77mm. The model is by far one of my smaller creations, containing only 549 pieces. However, despite its small size, this model does not sacrifice detail or features. The model has almost all the levers on the F3, only excluding the very small ones that are too small to show in lego, all the main dials on top are present, as is a representation of the mirror that would flip up on the actual camera when taking a photo. The back of the model does open, and on the inside there are representations of the shutter, film rails, and film recieving spool. In the last image, I included a mock up of a Film cannister, however it wouldn't actually fit in the camera due to the thickness of the LEGO walls. The model does not have any lenses that fit it at the moment, but I am working on creating some, and the camera is designed in such a way so that lenses can be attached. When I finish some lenses, I will post an update with them, so stay tuned for that.

For those of you who would like to take a closer look at the model, the model files for Ldraw and Studio can be downloaded here:

In order to make the model look closer to the actual camera, I used bricks in colors that LEGO currently does not make them in, so if you wanted to build this model, you would have to change some of the colors around.

Please share any feadback for me about the model, criticism is always welcome, but please keep it constructive!