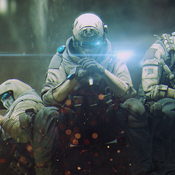 So folks here is my 5th project called C 9979. Its scale is fitting to the scales of the included MTT's and AAT's.

This should also be handled as UCS, but its still playable.

This one was also build beause i've never seen a Prequel UCS, but the intention was that i've seen so many of them on the internet, which initiated my wish to build one, too.

-Two moveable turrets at the front-top

-16 loadable AAT's ( 4 to support each MTT, fitting in the backwings)

-functional turntable as the original

-doors can be opened

-roof can be partially removed