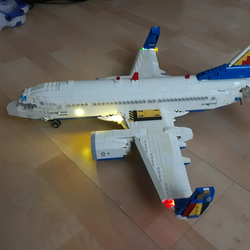 The design of my LEGO creation is based on the real airliner -  Boeing 737-300 series aircraft, the most successful airliner type of The Boeing Commercial Aircraft company produced so far.

This is a generic 737-300 version, the middle-length hauler from the whole 737 Classic family. It features retrofit winglets. This aerodynamic enhancement particularly saves fuel, improves the plane stability and generally increases residual value of the plane.

Main features of the model: