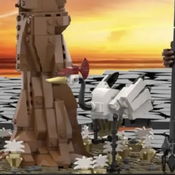 By StoneSmith
78 comments
"The weight of the world on your shoulders"
Based on the Statue of Atlas and the legend of Atlas in Greek mythology, this LEGO version depicts the Titan Atlas holding the weight of the world on his shoulders. Although in the original myth Atlas is punished to hold the heavens, I had a hard time depicting that in LEGO, so I made him hold the world. The base of the statue also has four other miniature statues that hold Atlas up. The pattern on the top and bottom of the base is supposed to mimic Greek patterns.
When figuring out what to make for my next MOC, I decided to make some sort of brick built figure, so I decided to make some sort of statue. I decided to do the Statue of Atlas because of how iconic and famous the statue and myth is that people would recognize it right away.
I believe this would make a great LEGO set because it's a fun build, and it would also make a great display piece.
Piece count: 2096 pieces
Dimensions in studs:
25.7 Width
26.9 Length
57.2 Height