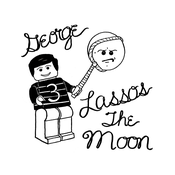 A LEGO Christmas Story House is on the precipice of reaching the 10,000 supporters, and it is an amazing feat. I, admittedly, perhaps did not do the best job of capitalizing on the interest and turning that interest into supporters when the project was submitted at the end of last year, but we will reach the goal (especially with all of the media attention!). Considering that this is my first and only project with LEGO Ideas, and that I started without even a personal Facebook page and with no insight into the LEGO community, gathering the votes has been a humbling challenge. We have recruited a lot of new folks to LEGO Ideas, brought back many who had been inactive for a while, and managed to garner plenty of support from the active crowd as well. I would like to take this opportunity to say thank you to all!

Although this project is a little different and adds a new holiday movie angle to LEGO Ideas, it does seem to fit well with the success that other sets based on iconic films have had. It can appeal to those that already have many other LEGO sets and introduce or bring back plenty of additional folks to LEGO. It is sized to fit on one 32x32 baseplate and can easily be incorporated to fit well with any existing LEGO City/Town (or other) configuration or setup that fans may have. It is rare to have a LEGO set related to a film that could even appeal to a wide group of folks who are not as familiar with the movie. Because it is essentially a detailed modular LEGO house, it has even received a lot of support from folks based on that alone.

After designing and building the set initially, it was entered into LDD (LEGO Digital Designer) to obtain a piece count. With the house and minifigures being just under 2000 bricks, it has plenty of variety in colors and shapes for those who want the set to rebuild whatever they want. It even has a light brick making the alternate build possibilities endless. With the potential addition of the family car (suggested previous update), it would even have a wider assortment of LEGO bricks.

One neat aspect about a holiday LEGO set, is that these sets have a logical time each year when they are even more popular. There is actually a museum dedicated to the movie in Cleveland, OH at the site of the actual house, and it is open all year round proving that this set would still generate plenty of excitement even outside of the wintertime. However, during the holiday season each year, this set could represent the perfect gift, making it even that much more successful, much like the other great LEGO winter and holiday sets.

This project started as an exercise to prove to my 8 (now 9) year-old daughter that anything is possible with some creativity and determination. We submitted it on the weekend of her 8th birthday and have been amazed with the experience since then. We have been invited to display the set at A Christmas Story the Musical and then invited to the cast party; we have been invited to display the set in a LEGO exhibit in a science museum; we have met an actress from the film, been involved in countless TV and news stories, and we have been humbled with the praise and excitement each time that we have had the opportunity to display it. One great aspect of LEGO Ideas that is different from the “normal” LEGO sets, is that these sets also come with a story. If this makes it all the way to the store shelves, the project will have made a proud father a hero for his little girl through a fantastic journey and experience.

One functional aspect to A LEGO Christmas Story House is that for some folks it can be considered a holiday decoration. Each year it can come out with the tree, ornament, village, and stockings. It will have a place to be proudly displayed during the holidays and then a place to be stored (for those who might not display it all year long).

There are fans of the film who simply want all items to do with A Christmas Story, and this set would be no exception. Since submitting the set last year, I have noticed how many people have A Christmas Story related products or memorabilia. Whether it be the leg lamp in the window, a “fra-gee-lay” mug, or bottle of A Christmas Story hot sauce, fans really seem to love all things A Christmas Story. This LEGO set could be the ultimate prize for any collector.

So we know that there will be plenty of adult fans of LEGO and the movie that would have interest in the set, but what about the kids? My personal philosophy is that this LEGO set is at its core, a toy, and I wanted this set to not only appeal to adult audiences, but to also have it 100% playable for my young daughter. Some of the initial revisions were made by observing her playing with it.

The set is modular, so that the roof and second story can easily be removed to view and play inside the house. The characters can all fit in the beds and sit on the couches. The doors all open (including the oven, refrigerator, door under the sink, and corner door in the kitchen). The leg lamp in the window really lights up!

The family car (if included) also allows for the tree to be strapped to the roof and a trunk that can be opened to store a spare tire and lug wrench.

#2 – The next logical step for A Christmas Story!

The success of the film A Christmas Story defies logic, as somehow it seems to get more popular every year! Since 1997, it has run for 24 hours starting at 8PM on Christmas Eve and now even runs staggered on another station reaching an estimated 50 million people annually in just that 24 hour window. There have been many books written about the film, and even one about watching the marathon! The movie has spawned A Christmas Story the Musical, which in 2017 was a Tony nominee for Best Musical. This year, it is even being produced as a live TV musical for the first time! The exterior where the house was filmed has become a year-round museum and landmark, and there is even a collector’s edition Monopoly set. Leg lamps are becoming commonplace in windows during the holidays, and in 2012, A Christmas Story was selected for the Library of Congress National Film Registry. The majority of the movie was actually filmed in Toronto, Canada, so it even has explicit multinational appeal. The time is now to further immortalize it with the most iconic toy, LEGO.

With the production of A LEGO Christmas Story house, there exists the opportunity to weave LEGO into annual family tradition during the holidays. As I have gone around and displayed the set for so many folks, they have expressed how they envision sitting around and building the set each year during the holiday season with their families. To be a part of something so special is rare, and with A LEGO Christmas Story House as an official LEGO set, we can make this vision a reality. Let’s make this happen.

I just wanted to take a few minutes on Thanksgiving Day to say thank you to all that have supported and shared this project. In addition to more than 8000 supporters, of all of the projects still actively collecting support on LEGO Ideas, this project is now the #1 most followed project! I think we just might make it happen, and I wanted to say THANK YOU. 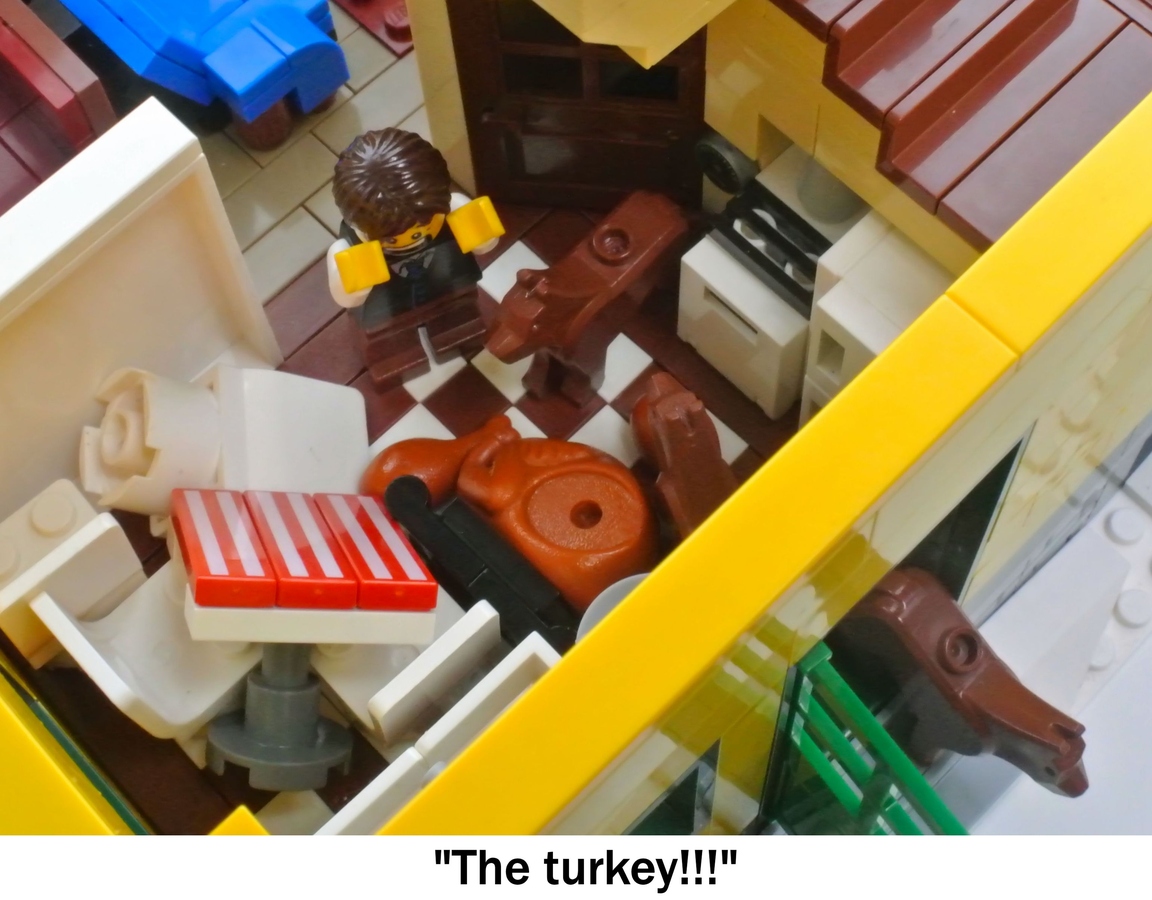 Some of the feedback that I had received on the project referred to the absence of  the family car, and although I had created it, I was a little hesitant to include it without a piece count for the set. Recently the model was entered into LDD software, and the total number of pieces for the house is just under 2000 pieces. Thus, with the addition of approximately another 130 pieces for the car, I think it still remains viable and LEGO can ultimately make the decision whether or not to include it if it makes it that far. Keeping with the theme of the set, the car is completely playable as well. The Christmas tree can be strapped to the roof, and the trunk actually opens to fit a spare tire (and lug wrench). It has the profile of an antique vehicle, but would still fit in nicely in any LEGO city or other scene. You can even re-enact your own "Oh Fudge" scene! 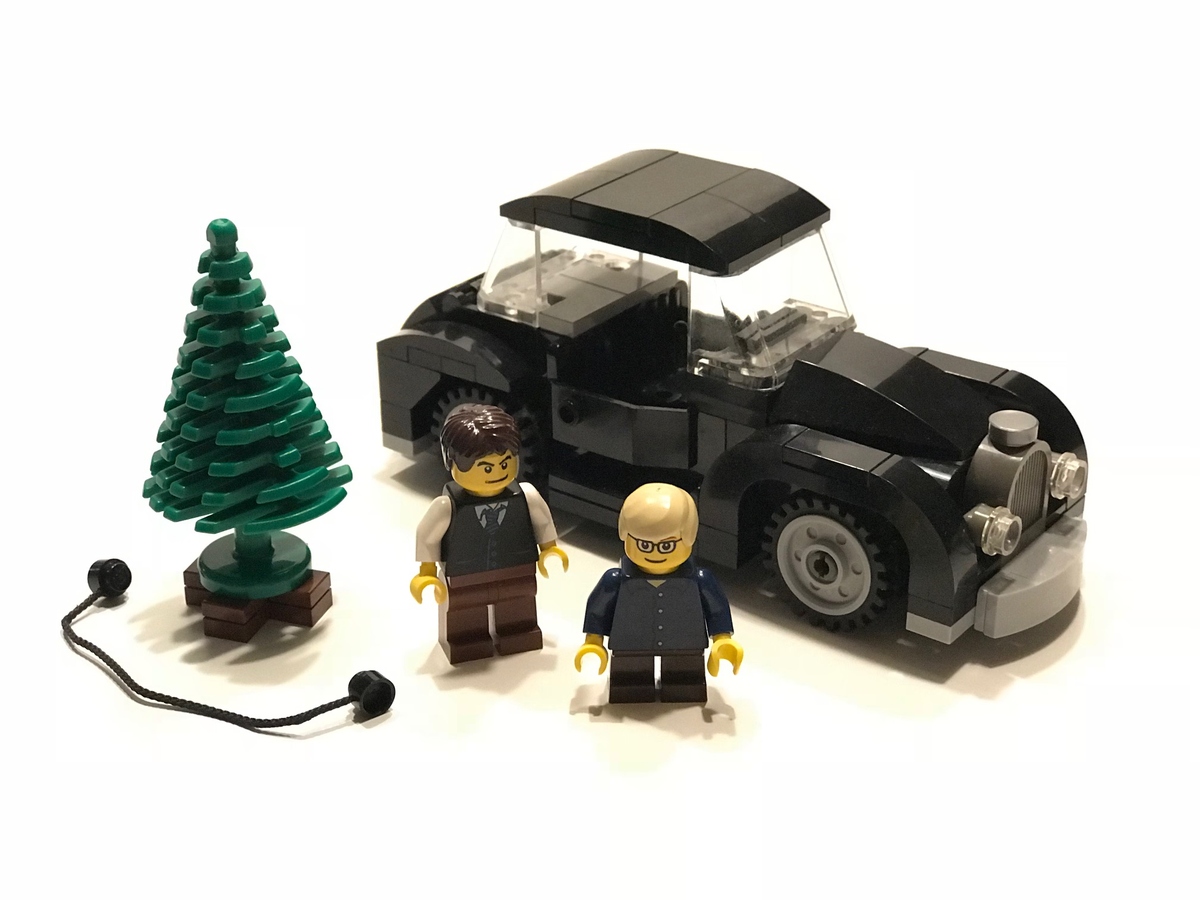 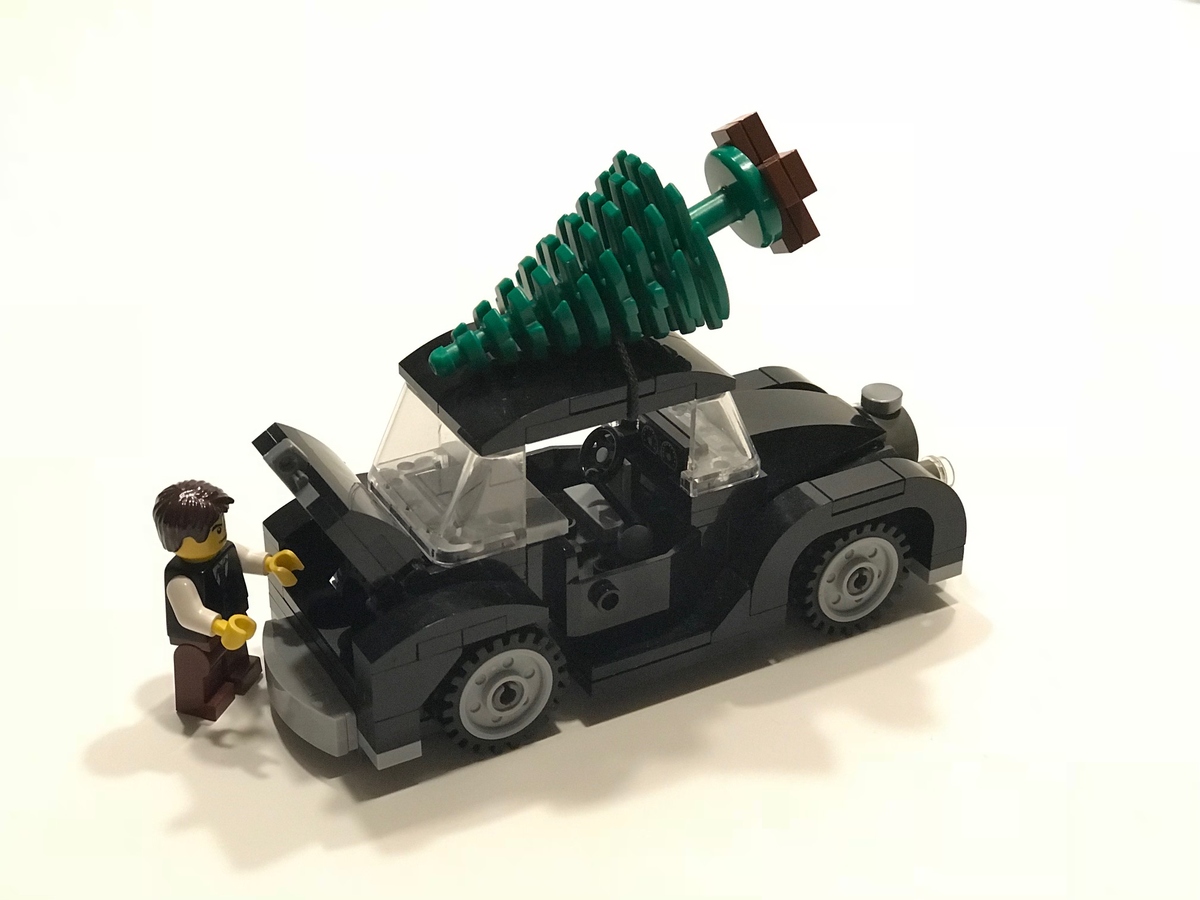 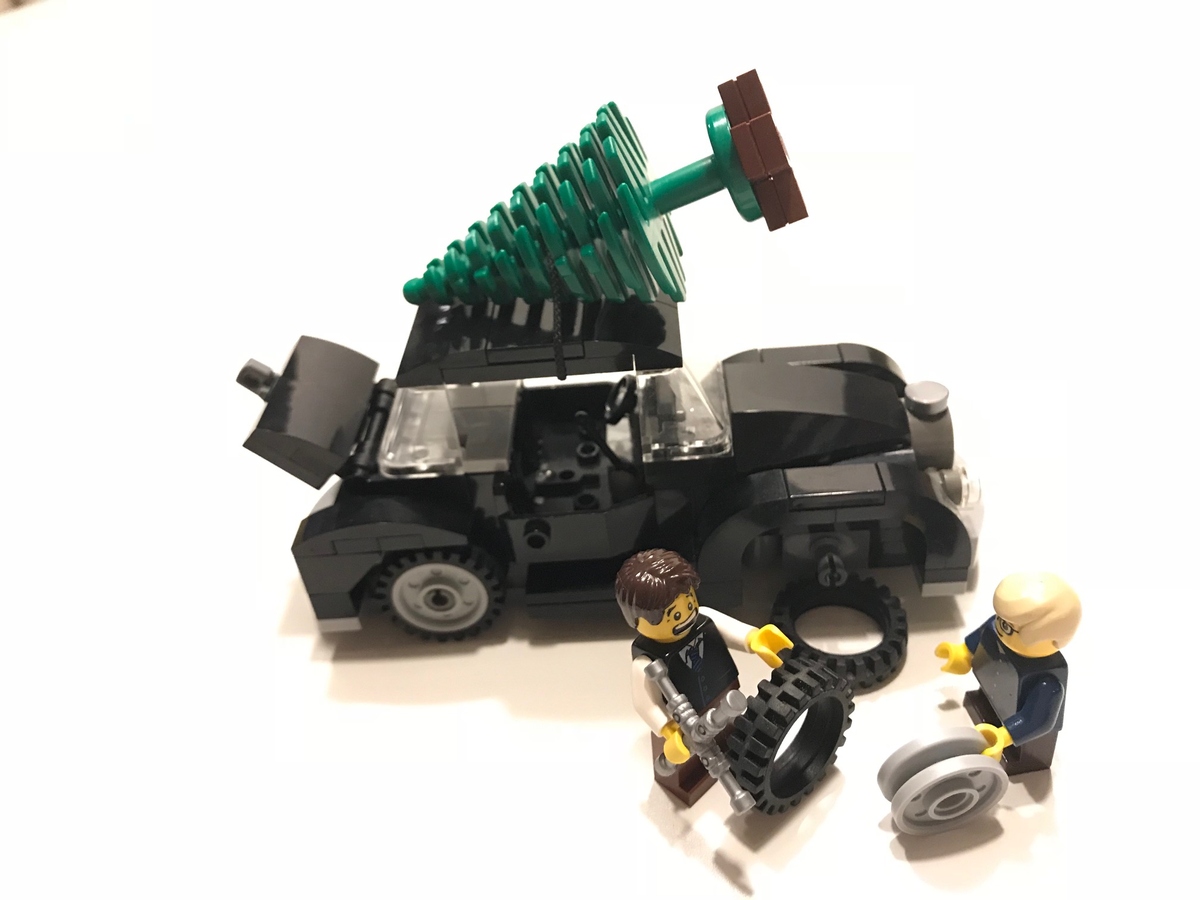 Our family's support journey for this project has been a little different than most LEGO Ideas projects. We have been able to meet so many great people through displays of the model in person, and as we start to get closer to this year's holiday season, we are starting to firm up plans for the upcoming months. Many great places have invited us to display A LEGO Christmas Story House, and we are happy to do it (for free of course)! Being from Upstate NY, we are a little limited with our travels, but we have confirmed several events primarily in the Northeast and Midwest US. As we get closer to the end of the year, I am sure that there will be others, but the below picture includes the current schedule. I really hope that if you can make any of the below events, that we will be able to meet you, and you can see a live demo of the model! If you know others who might be interested, feel free to pass this on! Thanks again to everyone that has supported and followed the project to date. 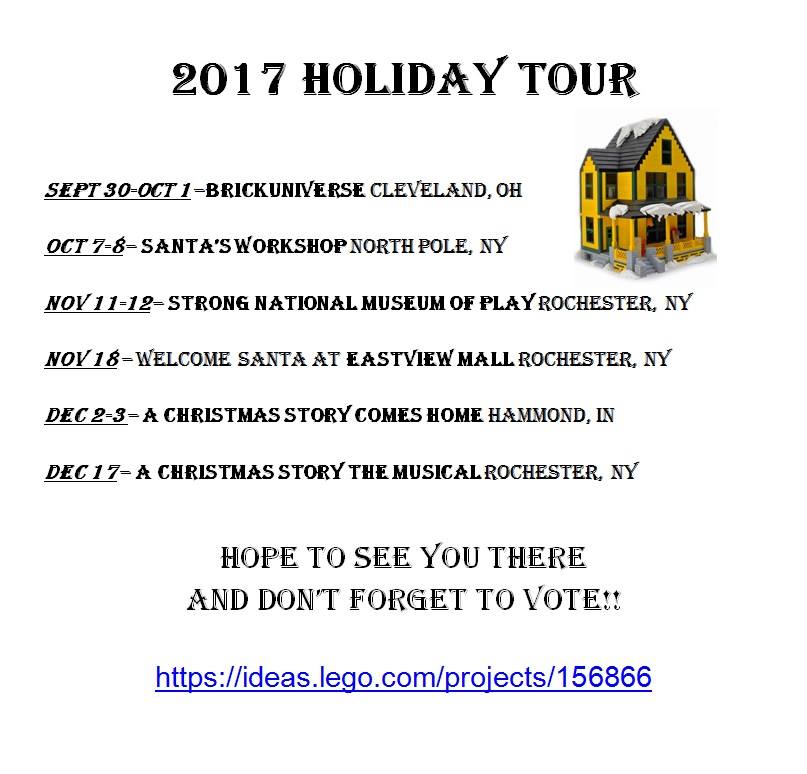 All of the pieces in the set were collected from existing sets, but a tile that contains Ralphie's Christmas Theme would be a great piece to include for Ralphie's desk in his bedroom. I am attaching a picture as a concept, and it could also include the teacher's P.S note at the bottom. 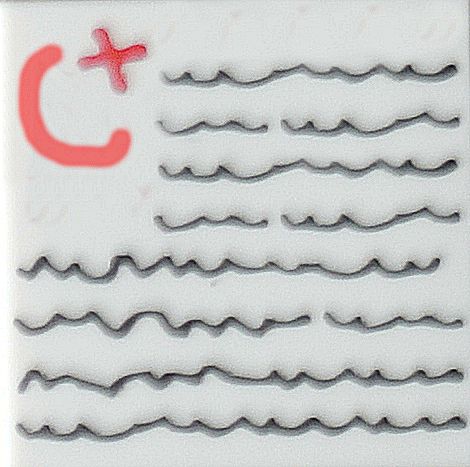 I Can't Put My Arms Down!

The original Randy headwrap had a clip on the back, but I have since discovered a better two-toned hat and scarf (borrowed from a ninja). I think that this better represents Randy's hat and scarf. I also changed the hands to gray to match. Take a look! 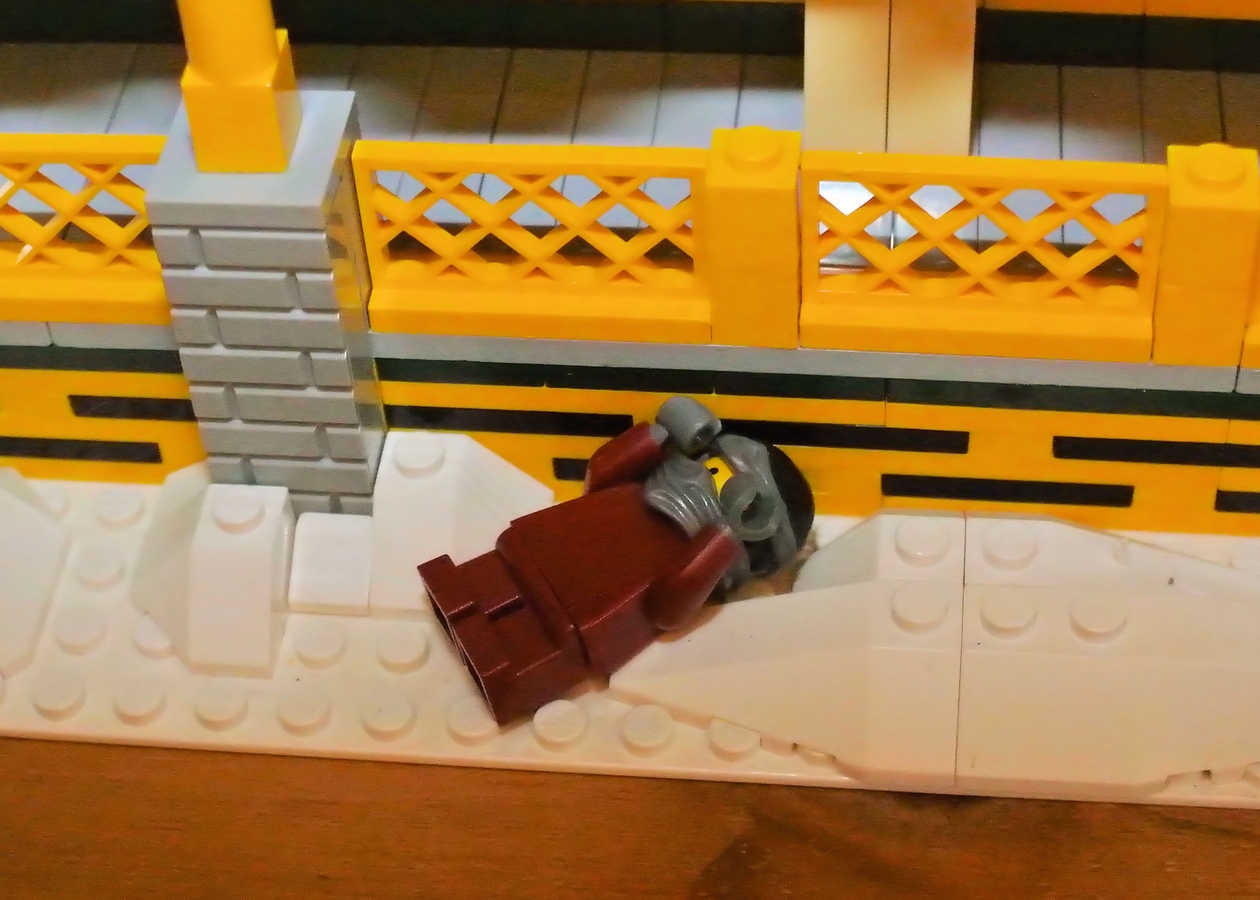 This week the project reached 6000 supporters (on the writer and narrator of the film, Jean Shepherd's, birthday). I just wanted to say thank you to all who have contributed to getting this far! The morning news in Cleveland, Ohio reached out to us, as we have now officially donated one of the prototypes of the model to A Christmas Story House and Museum. Check out this great family project! http://fox8.com/2017/07/24/lego-a-christmas-story-house-creator-shows-off-set/

Thank you all again!!

In an amazing coincidence, on the exact day that represents halfway through the calendar year to the 24-hour A Christmas Story Marathon (June 25), the project hit 5000 supporters! Maybe that is a sign. Simple math tells me that if each supporter can find just one other supporter than we will make it all the way to 10,000! Thank you all for the support and encouragement! 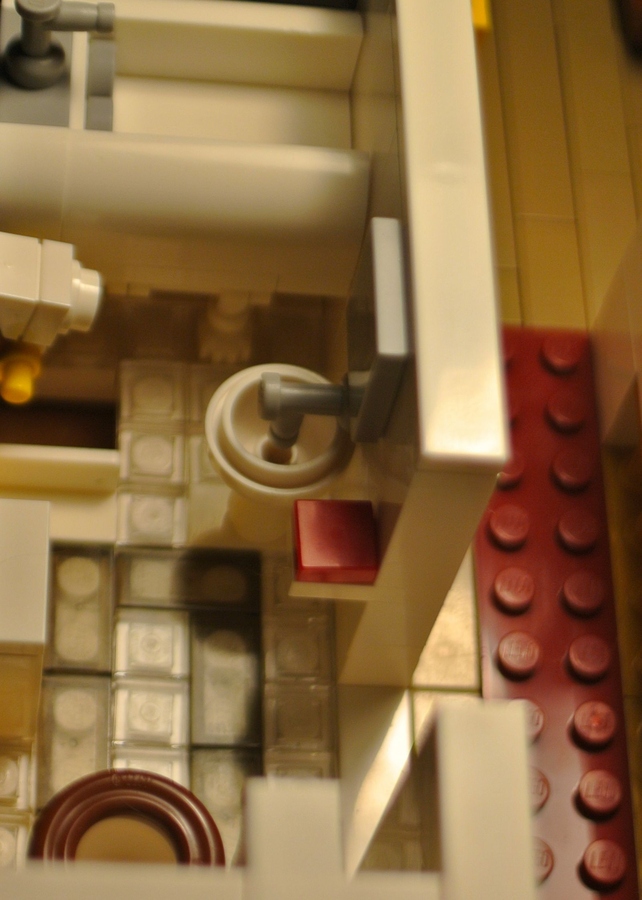 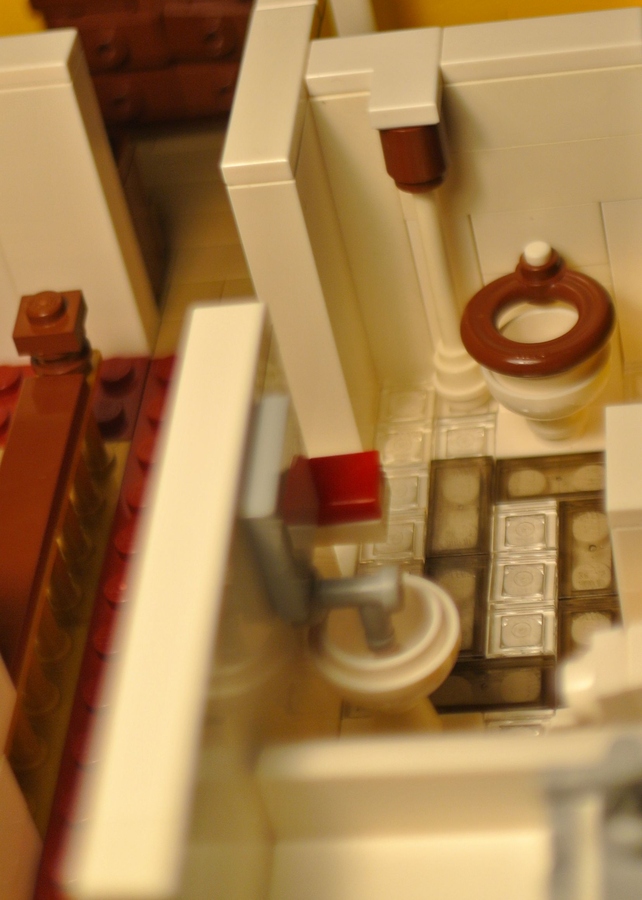