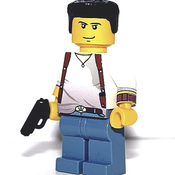 My story for this modular building is,  that the Wharf is based on the Sea Front village Theme. I liked the old Fishing villages so I built this one on Lego Digital Designer (LDD). I really believe that this model could have a lot of genuine interest to fans of Modular and my Sea Front Village sets. This is one of the ragged aged buildings that started the Sea Front village in the beginning.

Come to Captain Rob's Wharf and meet the old fishing men. There are still some fishing boats and the fishermen like to hang around and share their fishing stories. One caught fish bigger than the next. They talk about the good old days and like to spend their time, watching the boats pass by and play a game of cards.

The building consists of roughly 1870 parts and two floors: the main room, kitchen, and old shed. I used the colors dark brown and earth blue that gives it a realistic feeling. Five Mini-figures could be added such as four fishermen and one captain. And a lot of details.

Rowing boats  and much more,