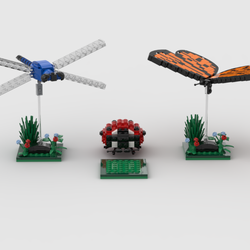 Hello Lego Fans, City Fans, Train Fans, and the Lego Team. My Idea I present to you is a 90-Degree cross track (Also considered a 45-Degree Cross track). This piece will fit together with standard Lego Track with easy and uses 100% all Lego parts to be constructed. The set consists of approximately 105-120 pieces. This track could be used for many different reasons anywhere from making a simple but fun figure-8 loop to complex freight yards and track geometries. I have thought about every detail which is 1). It has to be the same size as previous tracks. 2). It would need to use minimal parts and be easy to construct. 3). It would need to be as quiet as possible or be as quiet as standard Lego tracks when the train rolls over it. 4). It would have to be stable and would not fall apart in use.

A Little Background on Lego Cross Tracks: In 1966 Lego produced its first train set along with that came set 155 which included the first of it's kind a Lego 90-Degree cross track. Later it was replaced by the 4.5v/12v grey track era train track in 1980 which virtually was the same track in set 7853 (4.5v) and set 7857 (12v). Then in 1999 the track was replaced with a new version of the Cross Track set 4519 that would fit with the 9v train era track that has a similar design to today and that track was discontinued around 2006-2008 depending where they still had stock. So now present day with the new PF system we don't have a cross track which frustrates many today that we can't do certain track geometries and people just new to the hobby haven't experienced what they can do with this piece. It has been 10 years since we had this valuable track piece in our arsenal to work with.

Thank you all for reading. Please support or tell me what suggestions you have for this model and please share if you can.