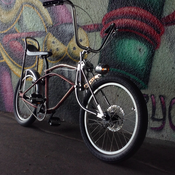 The Ae86 series of the Toyota Corolla Levin and Toyota Sprinter Trueno are small, Front engine, rear wheel drive models within the Corolla range marketed by Toyota, from 1983 to 1987, in coupe, and hatchback configurations.

The AE86 was available with a fuel injected naturally aspirated 4A-GE Inline-four engine DOHC 4 valves per cylinder 1,587 cc in Japan and Europe. In this model I have placed a representatoon of the 20 valve ae111 4A-GE based engine, this decision was similataneously inspired by drift king, keiichi tsuchiya's hot version Ae86, and takumi's final stage Hachi-roku.

Btw the motocompo in the back is only used to represent the trunk capacity of the model. cheers