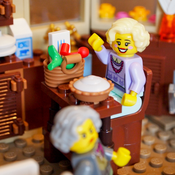 The Golden Girls is an American Sitcom created by Susan Harris.  With 180 episodes aired from 1985 tot 1992. The show stars Bea Arthur, Betty White, Rue McClanahan, and Estelle Getty as four older women who share a home in Miami, Florida. Today the show is still aired worldwide and very popular.

The set is a 360 diorama of the house. It features the famous kitchen where the girls chat and eat cheesecake, the living room and the veranda. Its completely detailed so you can recreate the best en funniest scenes with Rose, Blanche, Dorothy and Sophia. And don’t forget Stan Zbornak with his fake Monkey. Remember the scene where Rose has count Bessy, the “Showbiz chicken” that played piano, The bag full of Sunshine when Blanche lost her mind, Sophia’s sweater with the text “I’m ready take me hurricane of 91”, Dorothy holing Stan’s toupee and many more.

I worked on this project for almost two years and kept on improving to get all the details in a playable set. Still there are always improvements, I would love to get the minifigures spot on, a yellow phone in the kitchen, printed painting and more. But first let go for that 10.000 votes and make this real. It will be a wish come true.