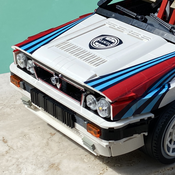 The Lancia Delta Integrale 16v: this iconic street and rally car, that won six consecutive FIA world championships between 1987 and 1992, has plenty of fan-clubs and enthusiasts worldwide, to the point that new editions were made to celebrate it’s 30th anniversary and accommodate the never ending demand for this nostalgic legend.
Construction began following the good old-fashioned Lego building concept of a clean sheet, piece by piece trial and error effort. Who would have thought it would take me 15 months! As I kept on building and rebuilding the concept refined: a hybrid between Lego Technic and Lego Creator. The chassis would be Lego Technic whereas the body made by conventional Lego pieces.
The aim was to create a display model with technical functions.
A priority therefore was a well proportioned body, it had to be as photo realistic as possible and well suited for plenty of stickers (a trademark of rally cars, the more the better!), which translated in keeping the body stud-less and with as few gaps as possible. Every piece of Lego in my hands was turned over and over again, searching for innovative ways of combining bricks. Choices had to be made regarding every corner and new skills, such as custom made stickers, had to be learned to reach the final goal.
This model follows a modular build philosophy: Front, back, side panels, roof, bonnet and chassis can be easily removed and put together again. Once the car was finished, every component was revisited to reduce pieces while making it lighter and sturdier to meet playability requirements.
I tried to build the Lego Model of my dreams, including as many details as possible: the dirt-catching red flaps, the instruments, pedals, mirrors, sun shades, air intakes, etc.
As I got deeper into it, it awoke the passion for engineering, design and historic research that this car incorporates, as it was a great joy to learn about the anecdotes revolving around the racing history of this typically Italian car!
It now shines on my shelf and makes me smile every time I look at it!
Thank you all for your support!
Technical Details and Functions:
All wheels driven and suspended with double wishbone suspension.
Front wheels steering following precise Ackermann geometry.
Steering wheel turns in accordance with the wheels, adjustable in height.
Working front and rear lights.
The gear lever in the cockpit controls the rear traction vs. 4WD option.
Differential in the front, none in the back as direct traction was preferred.
Powered by 3 PF Large motors, expandable to 2 or 3 PF XL motors.
Option to include high beam headlights.
Number of bricks used: 2584
Options for a B-Model. With just a few extra pieces, the predecessors of this car, respectively the mighty Lancia Beta and the monstrous Lancia Delta S4.