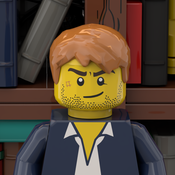 By Professor Brick
43 comments
On a jagged rock somewhere in the Mediterranean, the Imperial soldiers are guarding a small fortress against marauding pirates.
There are always reasons to attack such a remote outpost – to steal a treasure map or a chest full of gold coins kept in its cellar, to perhaps to rescue a comrade from the fortress prison cell.
To defend against pirates, the fortress is equipped with a guard tower over the main gate (located at the highest point of the rock formation) and a round canon turret with a great view of the sea to one side.
The different levels of the gatehouse/watchtower and the main building are connected by a wooden walkway and stairs. The lower floor of the main building houses accommodation and work space for the soldiers downstairs, and upstairs are the private quarters of the fortress commander. This upstairs room is accessible for play by lifting the detachable roof.
Beneath the fortress, cut into the rock, there is an underground store room (where food supplies and tools are kept) and a small prison cell – small enough to make sure pirate "visitors" are very uncomfortable indeed. This cellar is accessed via a couple of steps from the lower courtyard. (The courtyards, like the path from the jetty to the main gate, are made from yellow bricks to give the impression of a sandy surface covering these parts of the rock.) For playability, the rock splits in half on hinges to give access to the underground space and, as well as to the lower level of the main building.
The rock fortress comes with four soldiers, three pirates and two boats – a row boat for the soldiers, and a sail boat for the attacking pirates. (The sail is constructed from plates and tiles that click onto a mast, rather than using a canvas sail – just because it’s more fun to build as many things as possible out of actual LEGOs rather than resorting to other materials to supplement.) With the inclusion of these figures and boats, you will be able to play out endless battles and adventures.
This modestly sized fortress is built on two 16x32 base plates, which are connected with hinges. I chose not to use a prefabricated rock base (like the one used in the classic Eldorado Fortress (6276)). In keeping with modern LEGO practices, and just because I prefer brick-built structures to large pre-formed elements, the rock is built from a combination of regular bricks, slopes and palisade bricks. The rock is high enough to make it impossible for those pesky pirates to easily climb up the rock and over the wall, and for visitors to have to climb a significant sloping path on their way to the entrance gate, but low enough to keep the build interesting as a set.
With the recent release of the Pirates of Barracuda Bay set (21322), LEGO have revived the classic Pirates theme that was a favourite for so many of us growing up with LEGO in the 90s. Now that the pirates have a new home for a new generation of LEGO fans, the Imperial soldiers could really use a new home too. I built this set because it would complement Pirates of Barracuda Bay by providing a new base from which the Imperial soldiers can take on their old rivals.
The whole set contains about 2020 pieces.
I hope you like my vision for this new Imperial soldiers base. Thanks for supporting!