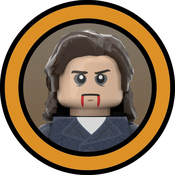 The Goodies was a British comedy TV series that ran from 1970 to 1982 with 9 series and 76 episodes. The show follows three men, Tim, Bill and Graeme who do "anything anytime". This business led to whaky hijinks ranging from a pirate radio station (S1 E7 Radio Goodies), to a tomato sauce battle in the west (S5 E2 Bunfight at the O.K. Tearooms), to the ancient Lancastrian martial art of Ecky Thump (S5 E7 Kung Fu Kapers).

I propose a Lego set of their iconic Office that served as their base of operations from The New Office (S3 E1) onwards. The set would consist of the Office, the pirate radio station The Saucy Gibbon, a bean bag and punching bag for "Bill's Bit" along with 21 minifigures , outlining the outlandish and iconic outfits that the trio wear throughout the show. These would include:

The Office (an abandoned train station) would have a removable roof, allowing for the office to open up. The inside consists of "Chez Tim" on one side and "Graeme's Den" on the other. "Bill's Bit" would consist of a bean bag and Tony Blackburn punching bag to put in the middle, also including Tim's gramophone. It would also include the Saucy Gibbon, the pirate radio station disguised as a boat.

NOTE: The set could also include their iconic trandem, though I could not include it, as new pieces are not permitted.