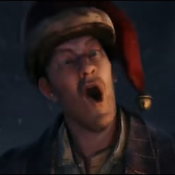 about the movie:
The Polar Express is a christmas movie that was released on november 2004, the story is about a young boy who doesn't believe in santa, but then this misterious train appears in front of his house, the boy hops on board, and the journey to the North Pole begins
In the movie, the "know-it-all" kid says that the locomotive is a 2-8-4 berkshire type steam locomotive, built in 1931 by Baldwin Locomotive Works, but in reality, it was based off the Pere Marquette 1225, built in 1941 by Lima Locomotive Works, previously owned by Cheseapeake & Ohio
Unfortunetly i do not know what the coaches were based off, but their livery is dark blue with a red stripe going down the middle, it has 15 windows on each side, the observation car has a very nice round deck, which is pretty fancy.
I built this train because holiday season is almost there, and it's one of my favorite christmas movies ever
about the lego version:
i've been building trains for a while now, and getting the proportions right was quite a challenge, but i think i did well. the train is 8 studs wide to accomodate all of the details, 8 wide is my go-to for building steam locomotives, engine is fairly well detailed, with pipes and lots of mechanical detail on each side, the headlight is sunken into the smokebox, just like in the movie, and the bell uses a fez hat, which i thought was a pretty neat use of that piece
the coaches are pretty well detailed, with the red seats on the passenger car, it was pretty hard to make that curved back section on the observation car, but the final product came out pretty nice, the interior was pretty fun to design too, again, using fez hats as the lamp shades
the set will come with a steam locomotive, a passenger car and an observation car, you can buy separate passenger cars to make a full train