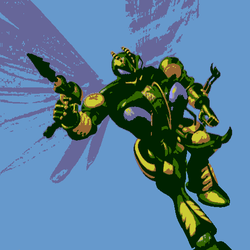 1,000 SUPPORTERS—and ANOTHER chance to get BIONICLE back on the shelves? 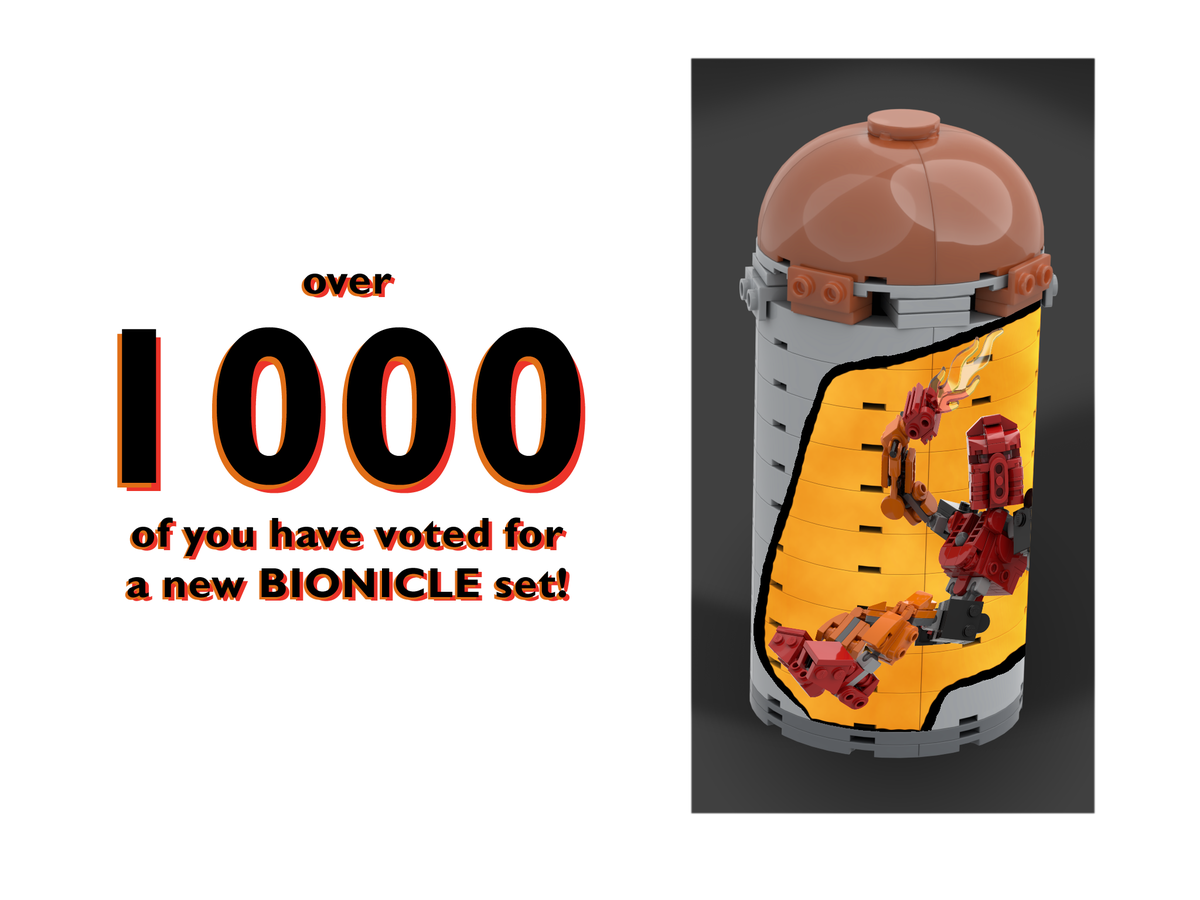 Some very cool things have happened in the last couple of days, so here's a quick update touching on them—don't worry, I'm still working on more models behind the scenes. First of all, THANK YOU for getting this project to 1000 supporters in such a short span of time! It's been just a couple of weeks since I launched the idea, and I'm ever so grateful for everyone who's spread the word so far. The second piece of news is that LEGO has surprised us all by announcing a fan-vote to pick a theme to be brought back for a single set to celebrate the company's 90th anniversary—and BIONICLE is on the list! Many of you will already have voted in the poll, but you can find all the information in this blog post; voting closes on the 25th of January. You can guess what my first vote was (the picture above should give you a clue), but I also couldn't resist throwing my other two votes at Rock Raiders and Alpha Team, two other themes I loved as a kid. I hope there's other stuff on the list that interests you too!

With all the response from the fandom, I'd be very surprised if BIONICLE doesn't make it to the top spot—but there's a catch, because LEGO gets the final say as to which of the top three themes will become a set. And as much as I hate to say it, I'm not sure they'll pick the constraction line as the theme with which to celebrate 90 whole years of the company. Still, I know that they're listening to our voices, and that there are people working at LEGO right now who'd dearly love to bring BIONICLE back for one more set. So even if they go with something like Classic Space or Castle to celebrate the anniversary, there's still the possibility that they might use this very project as an opportunity to celebrate BIONICLE on its own terms. So go vote in the poll if you can, tell your friends about it, and make sure to show them the project if you haven't already! And as always, thank you so much for all the support Wow—in the space of just a week, Tahu’s already passed the 500-supporter mark! The response to the model has been really phenomenal, I’ve loved reading all of your comments both here and elsewhere on the web. As a thank-you, I’ve recreated my favourite Toa from when I was a kid: Lewa, Toa of Air! 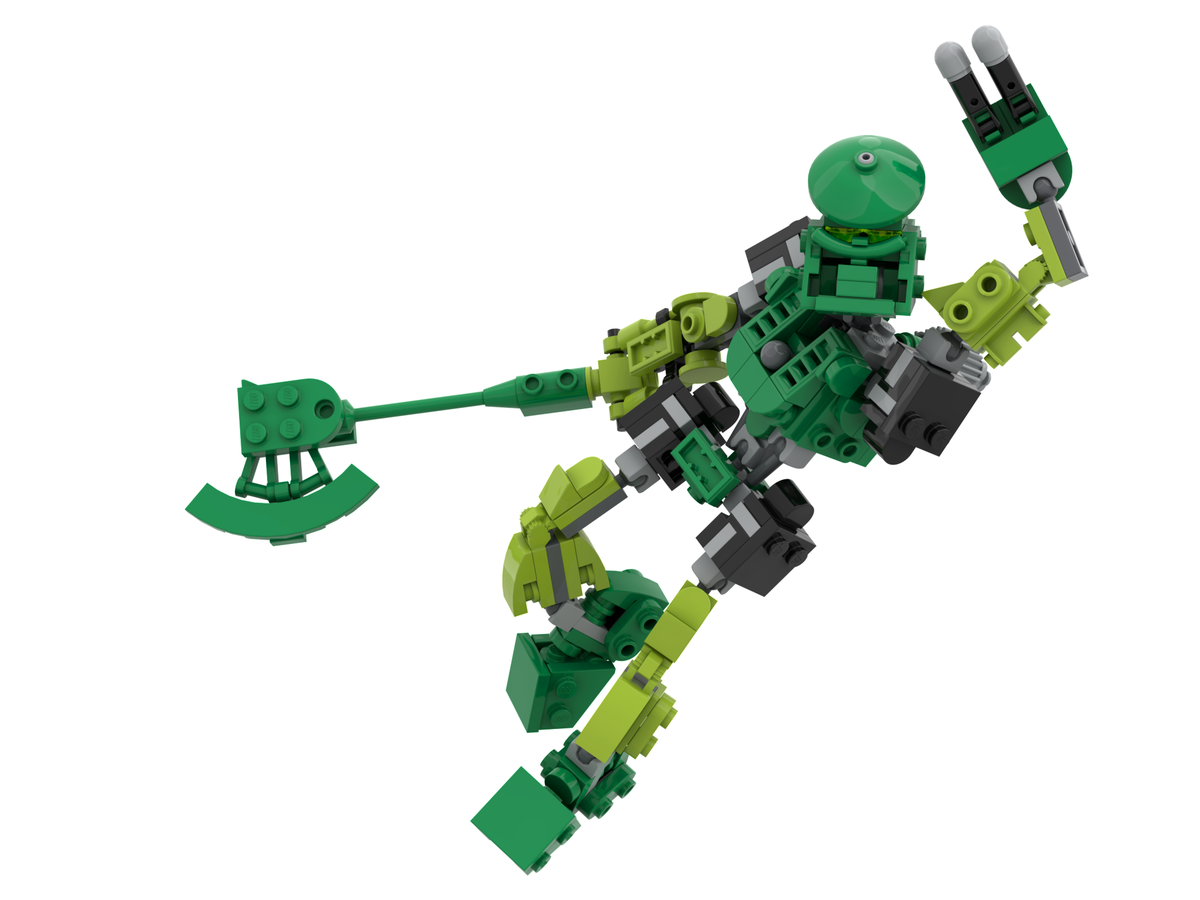 As Lewa won’t be a part of the final set, I’ve relaxed my standards for stability and part-usage a little, to better recreate the distinctive shapes of Lewa’s mask and axe. I’m particularly happy with my recreation of the Slizer/Throwbot limb piece, which was used on the 2001 model for a 90-degree elbow bend—here, the elbow’s actually articulated! 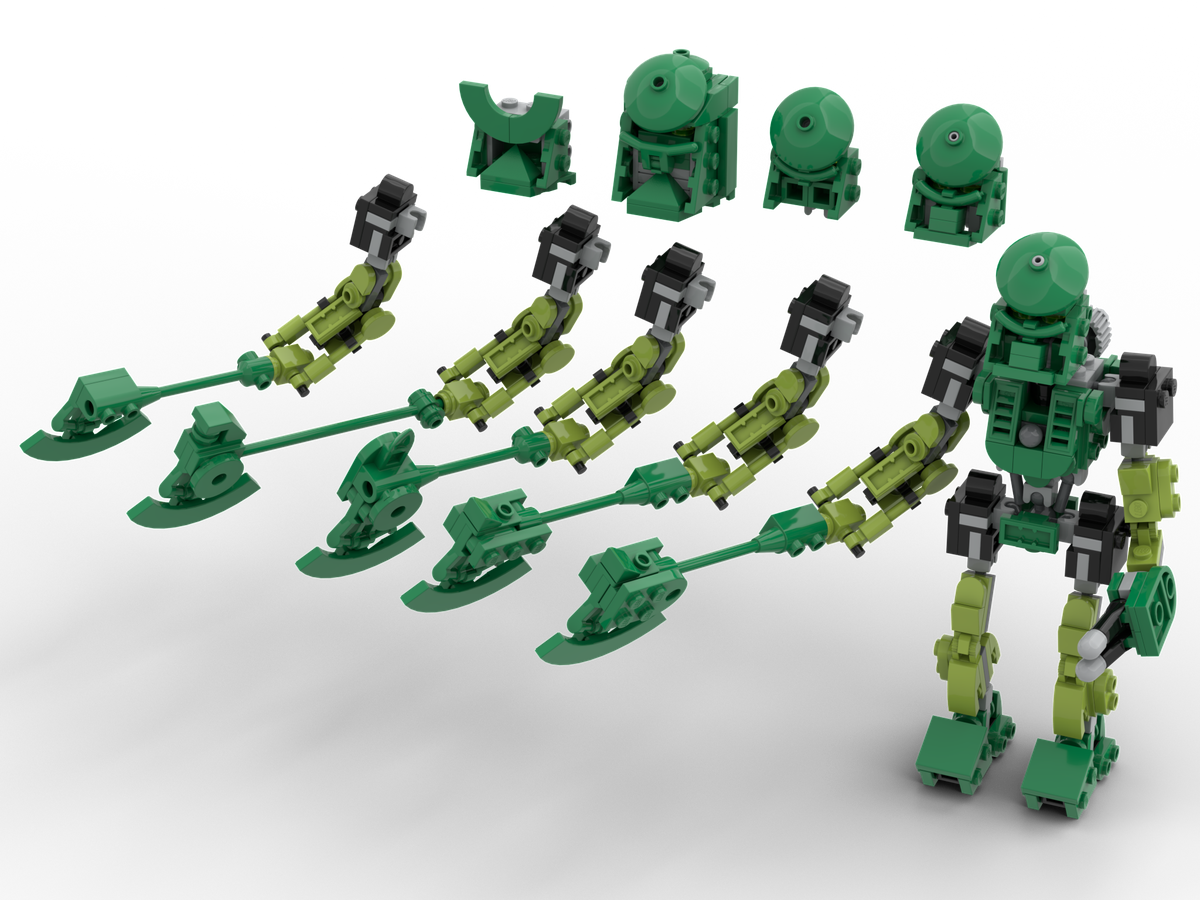 You can meet Lewa, as well as two more Toa, in the second chapter of Missing Pieces, which is a wholly-original reimagining of the BIONICLE mythos I’m serialising alongside this project.

Now, a ton of thought went into the Toa Tahu Awakens concept prior to its launch, only a small fraction of which is communicated by its main description—so in these blog posts, I’m going to cover some of the finer details, starting out by answering some of the most common questions I’ve been asked this week.

Another BIONICLE project has made it to 10,000 supporters before, but was not selected. Why is this one different?
This set uses a different approach, aiming to be viable for production above all else.

Simply put, I think it’s highly unlikely that LEGO has zero interest in creating a new BIONICLE set. We know for a fact that many people currently working at LEGO are fans of BIONICLE, and there’s been an increasing number of references to the franchise making their way into official sets. Far from being obscure, BIONICLE was a multimedia giant (particularly around the time of Mask of Light) that left an impact on children worldwide—and this pitch appeals not just to those fans, but to anyone who’d enjoy a toy of a cool (biomechanical) robot. With there being, to my eye, no licensing or production obstacles to overcome with this particular concept, it should be easy for LEGO to put into production alongside other, more cost-intensive projects.

Why hasn’t this been posted to [INTERNET PLACE] yet?
Since its first cancellation, the BIONICLE fandom has become increasingly fragmented—there are countless forums, groups, and websites devoted to the franchise, and I am only aware of a small number of them! If you’re not sure whether a certain place has seen the project yet, please take the time to share it—this is the only way for us to make it to 10,000 supporters!

What about the other Toa?
My goal is to create an affordable set that works as a standalone display and play experience. As you’ve already seen, I plan to create the other Toa in this style too (along with other iconic characters and creatures) and will be posting them as the project progresses, but they’re just for fun and won’t be part of the set.

Why not use orange ball joints?
Set design is restricted by what parts are in production at a given moment. For some, this changes from year to year, but other parts are produced consistently in a single color—this is to make them easier to identify amongst similar pieces. Since its introduction in 2014, the downsized ball-and-socket system has strictly color-coded its parts. More generally, although it’s impossible to know for sure which parts will still be in production at the end of the year, I’ve endeavoured to use as few newly-colored elements as possible to create a realistic pitch.

Why not use original BIONICLE parts, such as Tahu’s mask?
This was a stylistic choice, because I envision this concept as a tribute to the original line rather than as a revival. I wanted to show what’s become possible with the wide library of “system” bricks LEGO currently produces. Even if I wanted to use original BIONICLE elements, I would not have been able to—the molds used for LEGO elements wear down over time, and eventually expire (this is why certain specialised elements are retired by LEGO). As the molds for the original BIONICLE parts are undoubtedly retired, new molds would need to be created, which is cost-prohibitive and thus simply not an option.

What scale is the model?
Slightly less than 1:1, as seen in the comparison images, to account for the smaller size of the ball joints compared to the older construction system. There are, however, inevitably some areas where my model ends up being a little bulkier. For budget reasons, the canister is slightly downsized relative to that sold with the original toy (and certainly relative to its appearance in old animations, which usually depicted it as being wider than a Toa was tall!)

How does the canister lid attach to the base?
There’s a ball and socket hidden in the sand dune, which allows the lid to be positioned at various angles. For the Nuva build, that same socket is how the chestplate attaches!

Can’t you make the Nuva swords bigger?
I self-imposed the restriction that the Nuva armour should be constructed using parts from the diorama, believing the enhanced playability and reduction in material cost outweighed accuracy. Depending on budget allowances, this aspect of the concept is likely to be redesigned should it enter production.

How stable is the model?
My collection of parts is very limited, and sadly I was unable to create a full physical mockup of the model. If you think you might be able to, please get in touch! That said, I did design the model with stability in mind, and many of the details are connected in clever ways to ensure they stay firmly in position. For certain key areas, I was able to create small physical mockups just to check the stability of various connections. I’ve also experimented with alternate builds that trade off accuracy against stability; assuming redesigns are necessary, this means I’ve already explored some of the possibilities.

Can Tahu really fit in the canister?
Well… I don’t rightly know! As described above, I didn’t have the means to test this, but—fully-assembled or partially-disassembled—no, I don’t think he’d fit. In pieces however… most of his components are very small, and so just eyeballing it (based on years of transferring sets to small plastic boxes) I think you can probably get everything in there. But if it turns out to be a squeeze, the design of the canister means it’d be easy to add another layer or two of curved bricks to make it bigger, without really affecting the look of the model! So hopefully it’s a non-issue.

Will you share the stud.io files for the models you make?
Yes, once the outcome of the project is certain! It is not currently possible to create Tahu using physical pieces, as a very small number of crucial parts were never made available in the necessary colours—this problem is worse for the other Toa, as their colours are less common and I wasn't designing them with this in mind. If you're interested in the stud.io files for another reason, I might be able to share some on a one-to-one basis, so get in touch!

When’s the next chapter of Missing Pieces coming out?
Although I have a complete plot outline for the serial, which is projected to run to seven chapters total, I have not yet written the remaining five chapters. If you want me to prioritise the story, voice your support for it, and I’ll try to get them out sooner!

Thanks again for all your support—I look forward to hearing your feedback!