The Bell X-1: The Original X-Plane 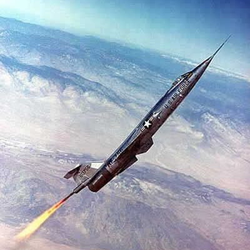 Rocket into history with Chuck Yeager and shatter the Sound Barrier!

An iconic event in history, the breaking of the sound barrier in 1947 ushered in the modern age of flight. Designed by the Bell Aircraft Corporation, the X-1 was purpose built with a liquid fueled rocket to explore the science and engineering challenges of going faster than the speed of sound. The set includes key facilities and extras to recreate the whole legend — such as Chuck Yeager's trusty broom handle that he used to close the hatch on the X-1 after he broke his ribs the evening before horseback riding with his wife, Glennis Yeager.

The Bell X-1 is a tiny aircraft, so getting the pieces to approximate the smooth shape was a serious design challenge. I wanted to include Glennis because she was the namesake of the original X-1. Also, the X-1 really needs stickers :D

Hope you enjoy my tribute to one of the most important moments in aerospace history. Thanks!