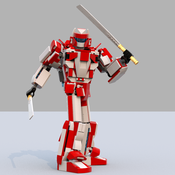 When in need the Power Rangers could summon these massive combat vehicles. Each Ranger had their own Zord, Jason the T-Rex, Zack the Mastodon, Trini the Saber-tooth Tiger, Billy the Triceratops, Kimberly the Pterodactyl, and Tommy the Dragonzord. Separately the Zords were powerful but when needed they could combine to form the Megazord, a massive machine that could easily dispatch Ritas monsters. The Dragonzord could also combine with the Mastodon, Saber-tooth, and Triceratops zords to form Dragonzord in fighting mode. The Dragonzord could also combine with the Megazord to form the Mega Dragonzord.

My idea Includes all six of the original rangers zords, which are fully transformable.(I did not add Titanus, that would put the piece count over 3000.) Each zord has their separate forms and can combine into the Megazord. I managed to complete all six zords using 2600 pieces. The megazord is about 11 inches tall, while the Dragonzord is around 10 inches tall.

I had originally posted the MMPR megazord, I contemplated adding the Dragonzord to it but decided to keep that idea as just the Megazord,

I have always been of fan of Power Rangers as long as i can remember, and i wanted to combine my love of Power Rangers and Legos. I started working on this idea about a year ago, In my spare time i would always try to work on it. I finally completed my design and now i am sharing it with you.

I hope you like my idea, Don't forget to check out my other ideas.