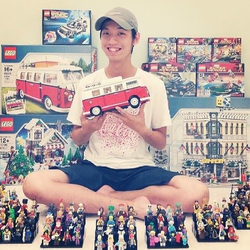 This project had just featured in the Blocks magazine print (issue 8), which originated from UK. Truly appreciate the writer of the article as well as the entire Blocks team for sharing this project on their latest print. It's a great honour and achievement on this.

Thanks for those supported for this project. Hopefully it could be an official set someday!

Thanks for 1000 Supporters and Green lighted from LEGO Ideas!

Thank you to every supporter who supported this project. It's been a tough start for this project as the pace for gaining supporter is not as fast as other great projects out there.

However, after received the Official LEGO comment about a preliminary check with licensing and seems to have no issue on this, it's really a big push for this project and myself to continue on gaining and seeking for support from the community.

Appreciate your support on this and continue to share and spread the word to all of your friends in any media. Without you guys support, i may not be able to come to this point and be succeed.

Once again thanks for the support and i truly appreciate it!