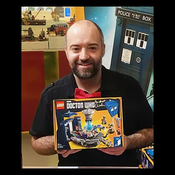 Have a FAB time with International Rescue aboard Thunderbird 2

This LEGO set proposal is based on the Classic 1960s animated science fiction TV series Thunderbirds created by Gerry and Sylvia Anderson. Growing up I loved watching the Thunderbirds with its epic and detailed vehicle designs, practical effects and exciting characters and missions.

Set in the mid- 2060s a team called International Rescue go on exciting missions with futuristic tech and vehicles. One of the most iconic of these is Thunderbird 2  which features pods that can hold other vehicles, such as Thunderbird 4 which is designed for underwater missions.

Thunderbirds has a lot of scope for missions, play, and display, and there is a lot of cool source material to base models and sets on. The color palette also matches well with LEGO, and those who grew up with the show like myself feel a sense of nostalgia.

If you think Classic Thunderbirds would make a FAB LEGO set click the blue support button, and share the link on social media. If it gets 10,000 supporters it could become a real LEGO set sold in stores and online!

The images shown are renders to showcase what it would look like with printed parts, and all parts in the right colors. This short video showcases that it works as a physical build. The core frame of TB2 is very robust, and does not stress the elements.

This video shows my updated design for the legs. Rather than snap on, they fold out and extend.

Have any thoughts what pod vehicles you would like to see? Let me know in the comments.