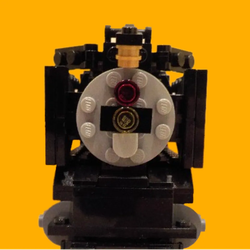 TeenyTinyBricks
13
395
days left
From the 2004 Christmas movie The Polar Express, this model features the train that takes the kids to the North Pole. It was designed for both accuracy and playability and is a fun model for all ages.
While the pictures show a digital model, I have made a physical real-life model to test all of the connections and functions. The build is sturdy and all the functions work as intended. Once I get all of the right-colored parts I will post more pictures of it.
The train can be upgraded with Powered Up in the tender to motorize it. Here is a video of my prototype running:
Even without electronics, this 1494-piece model is packed with play features and details. The engine has a detailed exterior and interior and features realistic moving side rods. The tender has a collapsing coal bed function where, when a minifigure is placed on top and the lever is pulled, the minifigure falls inside, to replicate the scene from the movie when the boy jumps into the tender. Both the passenger car and the observation car have opening doors and a removable roof and wall, which reveal the seats (and hot chocolate) on the inside. There is also a campfire for the hobo on top of the observation car.
This set would also have 16 curved and 4 straight track pieces so the train can be set up to go around your Christmas tree. And since the Polar Express is based on a real-life train (Pere Marquette No. 1225), it can be enjoyed year-round and mixed with other Lego trains.
I also designed 6 minifigures to go with the set (the hero boy and girl, Billy, the conductor, the hobo, and the engineer), along with a caribou/reindeer as a bonus. Other minifigures from the movie could also be included.
I built this train to have a Lego steam train from a movie I love, as the options for Lego train sets are limited. If the Polar Express becomes a set, it would appeal to multiple audiences, as train fans would appreciate the realistic steam locomotive, fans of the movie would love all the movie references, kids would love the playability, and anyone who loves the winter holidays could put this around their Christmas tree to add to the holiday cheer. If you agree that this would make a terrific Lego set, hit the blue Support button above!
13
395
days left