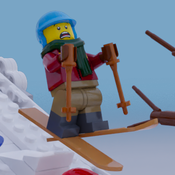 By ninetiesbrick
46 comments
There's never a shortage of fun during winter in the mountains! Whether you want to downhill ski, hit the terrain park, race against fellow skiers, rock climb in a crack in the mountain, build snowmen, roast marshmallows, watch the nature around you, or warm up in a log cabin, you can find it all on this wintery peak.
Details include a snowing cloud, ski moguls on some downhill slopes, jumps, and terrain features. The plates on the mountain can all be interchanged and adjusted, allowing you to put jumps, curves, bumps, or boxes and rails wherever you want on the mountain. The ski gates open to allow the skiers and snowboarders to slide down the slope; set up race paths down the mountain, and see which minifigure reaches the bottom first!
I wanted each side of this mountain to have details and play features, and I wanted the slopes to be modular and fully customizable, so jumps and curves can be put anywhere on any plate. I was also intrigued by the opportunity for a SNOT (studs not on top) mountainside, which allows for fun rock detailing and playability on each side of the mountains. I wanted the ski slopes to be a majority of this build, and for it to feel like a true mountain.
This build contains roughly 1300 pieces and plenty of accessories. It's playable for those who want to race and jump their minifigures, but also built to look great as a display piece!