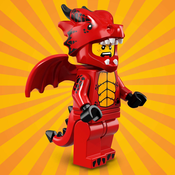 The Motograph is a stylish, interactive, and customisable animation model that will be a talking point in any home. Sliding the outer slotted frame left or right reveals different parts of the image below in an animated sequence.
The simple and sleek design is a perfect addition to any home, and a fun curio for people of any age, especially for those interested in animation. The slotted frame and the image beneath are both removable, allowing the animation to be customised as one of a few different designs.
The model uses the principle of 'the persistence of vision', whereby the sight of an image lingers in the retina momentarily after it has disappeared and allows the next image to merge seamlessly with it creating the illusion of movement. The image is split into 5 different slices that align with the slots above to reveal only one frame at a time.
I love animation of many kinds and have always been interested in different animation and optical illusion contraptions. I had a motograph when I was a kid that was some lines printed on a piece of film that you slid over the top of a picture to animate a character. I thought that this would make an interesting model that could also look quite nice as an object. I wanted it to be customisable so that builders could make their own versions. Here are some examples:

With it's uniqueness, style and fun, I think the Motograph would make an excellent LEGO model that will be enjoyed by everyone.