Jason and the Argonauts: Duel with the Hydra 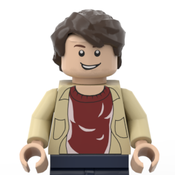 By George Brickman
32 comments
I have heard there is a tree at the end of the world... with a fleece of gold hanging in its branches.
Bring to life a classic scene from the 1963 fantasy adventure, Jason and the Argonauts. This seminal film, inspired by the ancient Greek myth, features some of legendary animator Ray Harryhausen's greatest monsters, not least of which is the seven headed serpent, the Hydra, who guards the golden fleece. Jason's encounter with this iconic foe is fondly recreated in this proposed set, which also includes the fleece itself. A prize worthy of Jason himself, this set would be a must-have for fans of LEGO and Ray Harryhausen alike.