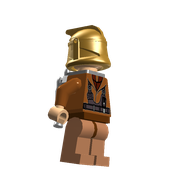 This is a fun, desktop-style system that incorporates LEGO bricks with the joyful memories of tiny wooden train sets. I love building and playing with the LEGO City and Creator trains, as well as making my own, but I have felt the need for a less expensive solution that still is as entertaining. With the small size of the Easy Play Trains set there can be fun anywhere in the home or even on the office desk!

One large freight train with:

One small freight train with:

One Passenger Train with:

A wooden bridge including:

An overhead Cargo Crane with:

And a coal bin that dumps coal into the coal car, also has one mini railroad track piece.

Besides the train station, the bridge, the cargo crane, and the coal bin, there are eight mini straight railroad tracks and 12 mini curved track pieces.

Thank you so much for your support! I hope we can bring back the small time fun that is becoming overlooked! Happy Building!