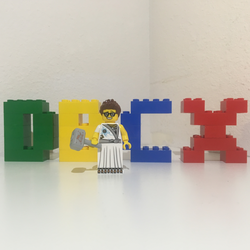 Hello, and welcome to the Aperture Science Computer-Aided Enrichment Center. The test chamber you are about to enter is highly modular.

1
As a fan of Portal, I’ve always wanted to have a fully modular testing chamber that felt like the builder was using the in-game test designer. I’ve focused my efforts on modularity while maintaining the aesthetic designs of the in-game models.
2
It’s very easy to take this set and change it, increasing its height or width, or replace light gray panels with dark gray surfaces, or even to add the crusher and the aerial faith plate. The set includes the materials and some example tests, but the major value of it is how much the builder can change and redesign it!
Panels
Individual panels are designed with the aesthetics of Portal 2, featuring their signature light blue eye and pale-yellow mounting to the walls and floor. The true panels would have light gray or white cylinders in their build, but Lego has produced these parts in black. I like how the gray cam pieces look, and there are two separate pieces to increase friction.
These “planks of tomorrow” are indeed fully configurable and infinitely variable, just as advertised! The panels each have 7 points of rotation, allowing someone to put the panel in any orientation they can imagine. Each panel also has two points of extension, allowing it to reach heights of more than three wall panels tall! (every colored segment is 5 bricks tall, the same as a panel)

The panels have interchangeable tops. Some compatible tops included in the set are the portals, different buttons, wiring (very customizable), and various panel top patterns.

Modular Testing
The chamber is built of modular bases. Their jumper plates allow the connection of both panels and other test chamber elements, such as aerial faith plates and crushers, while the central hole allows for action features. Each base can be directly connected to four other bases using short axles.

To allow for panels based in any orientation, there are 90° horizontal turn and 90° vertical turn elements. These make it easy to customize the dimensions of your testing chamber.

This image shows just how different you can make each test look, simply by changing the layout of the walls! The modular testing system makes it all possible.
Interactive Elements
The crusher included with the set can replace any panel, mounting directly onto the modular base unit. It includes a crushing action feature, actuated by a red knob. It can reach more than three panels away!

The Aerial Faith plate also replaces any panel, and can actually launch minifigures. It has two blank white squares where Lego dice prints would go (these prints aren’t in Lego digital designer).
The chamberlock is the goal at the end of each test chamber. Pushing the blue knob behind the modular base opens the doors.

Playable Bits
Turrets across the games a8re included! The white turrets are inspired by of Dave Pickett’s (Brick 101’s) brilliant design on YouTube, and I tweaked them slightly to make them more portal-accurate and accommodate lasers emitted from their eyes. The defective turrets are also included, as is the rocket turret from the first game, with a shootable projectile! The only turret missing is the frankenturret, because I heard feedback that they wouldn’t be worth it. Take a look through the updates and see what you think, and let me know (I like them :D).

Other characters include Wheatley, with poseable eyelids and a very flexible management rail connection, and either Chell (not pictured) or Bendy, the perpetual testing initiative character. Lego Digital Designer didn’t have Chell’s exclusive print, or the portal gun. Finally, an Atlas and a P-Body will be included.
Vital Testing Apparatus includes an Aperture Science Weighted Companion Cube and an Aperture Science Weighted Storage Cube. Neither is printed in the image, but will use the released Lego Dimensions print and a new one. All sides are tiles, so they look better and slide around on the panels when they move!
A radio, cake, a Borealis life preserver, and water are included, and there are plenty of hiding spots to put them thanks to the modular testing system!

This set is all about modularity, and allowing the builder the resources and starting instructions to create every test chamber they imagine. While the set elements are very compatible, they are also designed to look good and accurate to their game versions. This set will suit people who are fans of portal, enjoy interesting building techniques and functions, and are excited to customize their Lego sets. Despite the infinite possibilities, this set is very straightforward to put together, and younger builders will find success with this set.
Builders can play through the entire Portal Series with tests from most plot points!
10
The beginning of the game, overgrown and abandoned
11
Overgrown, Wheatley on a rail in a more complex test with turned off panels and depth
12
A typical modern test
13
The test, solved
14
In-progress Wheatley Laboratories test, with gel and crushers, Wheatley screens and deadly pits

Check the updates section for improved designs and reduced part counts (currently parts count is 2045, roughly $200), and go to DosBrosComix (https://www.youtube.com/channel/UCyOitGlG6cLJzs3XYvNbFIQ) for more information about the project.

Thank you for viewing my project! If you know any fans of Portal or Lego, please let them know about this project!
Stay Alive!
410
days left
345