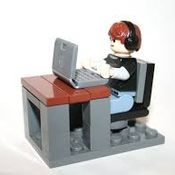 "Spider-man, Spider-man,
Does whatever a spider can
Spins a web, any size,
Catches thieves just like flies
Look Out!
Here comes the Spider-man."

This scene is based loosely on the 2004 Spider-man 2 movie where Dr Ock and Spider-man battle it out on the New York railway train above the streets of New York. I really tired to capture the not only Spider-mans world but also the city of New York. The build also has a cameo appearance of our favourite comic book writer Stan Lee.

Although with Spider-man 2 being 11 years old I can understand that it's unlikely that Lego will produce something connected with the movie, although in the new Amazing Spider-man 2 movie released last year, it breifly shows a suit for Dr Ock in a quick scene, so the next Amazing Spider-man movie might make Lego Spider-man popular again.

Anyway I hope everyone enjoys and please hit that vote button.
Thanks, Pieter