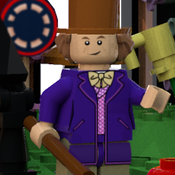 Nearly forty-five years ago Willy Wonka and the Chocolate Factory hit cinema screens and made an indelible mark on movie history. In honor of its impending anniversary I submit to you this proposal for a Lego set that recreates some of the most memorable parts of Mr. Willy Wonka’s factory.

Contained within this set is:

The factory exterior: With working doors and adjustable roof.

The entryway: Featuring the Wonka contract and pen for signature.

The Chocolate Room: In this room you will find many delicious treats such a lollipops and gummy bears.

The Great Gum Machine: It features moving mechanical arms and a table top with the ability to spin. Featured too is Violet Beauregarde, blown up like a blueberry due to her snitching a piece of gum from the machine.

The Egg Sorting Room: Featuring the Eggdicator which will drop spoiled eggs and that rotten Veruca Salt below. Eggs are included, but not shown.

Also included is twelve minifigures representing the five ticket winners, their parents and two factory employees including the owner, Mr. Willy Wonka, and one mischievous Oompa Loompa. In addition five Golden Tickets and three Wonka Bars are included as props.

So please cast your vote to bring Willy Wonka’s famous candy factory into the Lego world.

*It is suggested but not shown in the physical pictures that some elements in the physical structure have unique printing or sticker applications. In particular the Wonka sign and windows on the front of the building and lollipops and mushrooms within the Chocolate Room. Additionally a print on the front of the brick built Violet Beauregarde should be considered as well as the Golden Tickets and Wonka Bars.

*Two parts do not appear physically in the pictures due to their current absence in the Lego Digital Designer program. These include three of the new egg mold in gold and four of the rounded windows.