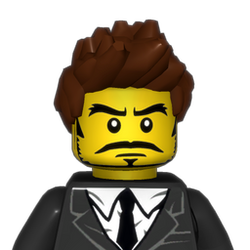 Introducing King Kong, the 8th Wonder of the World!  Inspired by the 1933 movie, this proposed set stars a fully posable King Kong figure, along with his beloved Ann Darrow (Fay Wray) on Skull Island.  Kong's hands, arms, legs & head fully articulate to help fans reenact a variety of movie scenes.  Ann can be placed in Kong's hand or shackled to the stone pillars to lure him towards the awaiting captors.  The floor of the stone altar even opens to reveal a secret hiding place containing a few bananas, old bones and a skeleton!  Minifigures include first mate John Driscoll, Captain Englehorn and director Carl Denham along with his trusty movie camera.