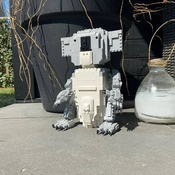 By YeLe46
33 comments
Indiana Jones: Raiders of the Lost Ark was a movie directed by Steven Spielberg, based on a story of George Lucas. This set idea is based on the opening scene of Indiana Jones: Raiders of the Lost Ark and is one of the most iconic opening scenes in movie history.
There are already sets based on the movies, but sadly I was too young at that time to have the ability to buy them. I made this project in the hope of another LEGO Indiana Jones set.
This amazing scene could make an amazing set for the fans that missed out on the older sets.