King's Quest I: Quest for the Crown 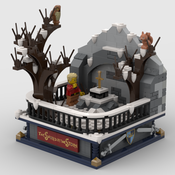 Anyone who grew up playing PC games in the 80's and 90's remembers Sierra Online and Roberta Williams’ King's Quest series. Selling millions of copies throughout the years, the first King's Quest was followed by 7 sequels, 1 re-imagining, a few remakes and many fan made games. I spent hours playing this game as I am sure many of you did too.

I chose to capture the moment where Sir Graham completes his task of finding the three missing treasures of Daventry: The Magic Chest, The Magic Mirror and The Magic Shield. These treasures are included so you can display them on top of the castle.
Magic Chest
The chest of gold refills itself with gold coins every time it is emptied.

Magic Mirror
The Magic Mirror has the ability to show the truth, be it the past, present or future. It is believed to have once belonged to the magician Merlin himself.

Magic Shield
Also known as the Shield of Achille, it has protected Daventry for hundreds of years. The shield is believed to have once belonged to the legendary hero Achilles.

King's Quest plays an important part in the history of adventure games being one of, if not the, first graphical adventure games where you moved a player around on the screen instead of being presented with a wall of text. Some of the best games of that golden era were directly inspired by this game.
So, why do I think this should be made into a set? Sets based on video games have done well. Niche sets can also have a huge built-in fan-base, and this one has a big one. It's a great looking display piece, but could also be played with by children. And who doesn't love a castle.
I hope you enjoy it as much as I did making it. If you get stuck, I also included a small hint book hidden in the base of the display, because honestly, how else are you getting all 158 points?!