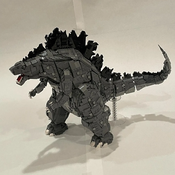 By MattE720
142 comments
What I have made here is my version of a life-like Godzilla, with the body and structure mainly based on the creature's appearance from the most recent "Godzilla" movies, such as "Godzilla", "Godzilla: King of the Monsters", and the new upcoming movie "Godzilla vs. Kong". I chose to build this model mainly because of my increased interest in the monster over the past few years . I was really blown away by the new look of the Godzilla in these newer movies. I was fascinated by how this new iteration of Godzilla was designed, and I thought that this new look would translate incredibly well into LEGO. I believe that this model would make a great LEGO set is because I believe that, with the new movie coming soon into theaters and on to streaming services, I believe that many people would be hyped and excited to watch this new movie, as well as have their own buildable Godzilla at hand to play with. I know that more Godzilla movies like this will eventually be made in the future, so the hype will most likely stay for years to come. I believe that the most famous toy company in the world would want to sell a model like this for both kid and adult fans to enjoy. I can only imagine what you guys at LEGO would improve on with my model I've built. It would be a dream of mine to witness how you guys would be able to make your version of this model with the plethora of LEGO pieces at your disposal. I see this as an opportunity for LEGO ideas, as this would be a very unique model, a model that feels more organic and realistic, and I can see the potential for this model's success in the market of kid and adult fans, targeting both markets. I just believe that this model would do considerably well with sales. Thank you for giving people like me this opportunity to make a model like this. I hope you guys at LEGO review this set to hopefully become a potential official LEGO set. I truly appreciate it. Thank you!!!