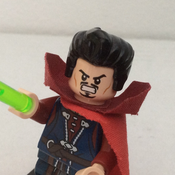 It's time to raise the curtain for this Lego Muppets idea! It contains one of the most well known Muppets: Animal. He's the drummer of the fictional band Dr Teeth and the Electric Mayhem in the Muppet Show and films. Animal's arms can be postitioned to calmly tap his drums or flail out of control (he's well known for this).

His head is fully poseable and by moving his eyebrow and opening or closing his mouth you can allow him to be "In control" or drumming wildly! He also has a drum kit, with three drums and two symbols.

I chose to make Lego Muppets because they're something that's popular with all ages. Many people watched it when they were younger, and are still fans! With the new Muppet films, children are also becoming fans of the comic creatures, so Muppet Lego would be ideal.

Animal was the muppet I chose to build, not only because he's one of the most popular Muppets, but because he's very colourful, which makes him more exciting when converted into Lego form. The final model contains 527 Lego bricks, measures 232mm tall and 273mm wide.

I hope you like this most sensational, inspirational, celebrational, Muppetational idea!