The Sorcerer’s Apprentice: Battle in the Wizard Lair 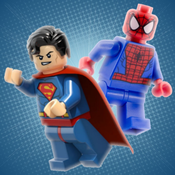 “I am Balthazar Blake, sorcerer of the 777th degree, and you are... my apprentice.”

The Sorcerer's Apprentice is a 2010 Disney live-action fantasy-adventure movie. Loosely based on the Fantasia short of the same name, the movie tells the story of modern-day wizard Balthazar Blake, training college student Dave Stutler as the titular apprentice.

This set is a collaborative project between me and SuperHobbitHeroes. If you like this project, be sure to check out his project page as well.

When making this set, we attempted to recreate the underground science lab that Balthazar uses to teach Dave in the ways of magic. Since this location appears so often in the film, we included elements from several key scenes. These scenes are: Dave's training sequences; when the evil Horvath and his apprentice, Drake, break into the lab to steal the magical Grimhold; and of course, the iconic mop scene.

This set has several play features, including transparent blue flick-fire missiles over the sink to represent water "shooting" out of the sink, a catapult to simulate the wizards' main method of attack, and three giant tesla coils with a "falling over" function.

The tesla coils are made with two different kinds of wheels, stacked up and held together with a cross axle. They have a joint on the bottom, so that they can fall over like in the film.

The Merlin circle is an 8x8 round tile, which would have either a sticker or printing to indicate the magical symbols.

Several accessories would be included: four transparent blue flick-fire missiles to represent water overflowing from the sinks; three transparent blue cylinders to serve as plasma bolts; Dave and Balthazar's green and yellow rings; Horvath's cane; the Encantus; a mini tesla coil; the Grimhold, depicting a blank minifigure on the front; three buckets for the mops to carry; Dave's protective gear; the magical hat from the Fantasia cartoon; and three mops.

The minifigure lineup is shown in the final image. Characters that would be included are Becky Barnes, Balthazar Blake, Dave Stutler, Maxim Horvath, and Drake Stone.

If you want this project to be made into an official LEGO set, please support, and spread the word. Thank you for reading!