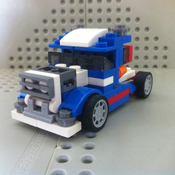 This is my 7-wide Lamborghini Aventador, my fourth MOC on Lego Ideas!

It features 245 bricks, all of which are existing parts, a sturdy build, a clean black interior with a spot for a minifig, which would be included if this were to be made into a set, and a detailed, easily accesible V8 engine.

I would like to see this made into a set because I love Lamborghinis, and I know I'm not alone. I also think it would be cool if Lego came out with a realistic 7-wide car. The idea of seven studs gives it a feel that it's a bit more advanced of a model, which would give it a greater appeal to adults and make kids feel even better than usual about themselves for completing it. Also, seven studs is something new; in other words, there is not another set that is a seven stud wide car, so since this would be the first, it might interest a bigger audience than another 6-wide would.

I would love to hear your opinion about the color of this MOC, because it could be really anything, like red or yellow or even bright green! (That would require the production of new parts in new colors, but it might also give a bit more appeal to part collectors for a rare color. Pluses and minuses. Actually more like pluses, because who doesn't love new parts?) On top of that, if you notice the yellow square in the middle of the front of the car, I think it would look super good to make that a Lamborghini-logo printed piece. Either that, or a Lamborghini-logo sticker on the curve right above it.

If you would like to build this whether it becomes a set or not, it will be posted on rebrickable.com soon, where there will be a free  LDD file. There is also a full inventory of the parts needed to build this.

Thank you for taking the time to view this! I had a lot of fun building this MOC, and I hope you will want to see it made into a set as much as I do!