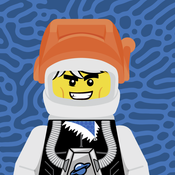 Older fans of Lego will probably remember the Ice Planet 2002 theme from the early 90s.

My main goal was to build some sort of modern mech like saber-toothed cat/cyborg with a modern Ice Planet look. The Cycat is very flexible and carries a nuclear plasma cannon on the back for combat.The build is a bit inspired by Power Rangers and some of the mech's from Zoids.

The Saber-toothed Cycat, is mostly used for protection and hunting down enemies like Blacktron. When there is nothing to do he loves to play around with the Ice Planet astronauts, and explore new areas.

Thanks for reading! I hope you like my idea and with your vote, we can bring this nostalgic set to life.