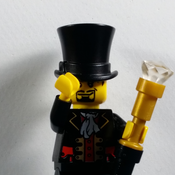 Sorry for the lack of recent updates for the last 2 weeks.

Along with other larger, more ambitious projects outside of Designing and marketing Lego Idea sets, I had been busy with work and other duties around the household.

Nine days left, and my final score for my first project is approximately 59 votes of support, 720 Views, 36 Comments (and counting) and 24 followers.

While I am disappointed at the views to upvotes ratio, I feel it has come down to a lack of real play features, or objectives in this project.

Point in case, in most Traditional LEGO Sets, Citing the Ninjago Raid Zeppelin as an immediate example, it came with The core model itself, the Zeppelin, which has 2 Aero-Pirates piloting it, as well as a smaller secondary model, with comparable functions, stud-shooter projectiles, and a Hero Minifigure, Zane, to fight the Aero-Pirates on their Zeppelin.

I was too excited with the product I had prepared, and submitted it as complete, with little to no thought on set playability. As a matter of fact, a literal week since the project was submitted, the Adventure Galleon has undergone a major overhaul to the body, making it a more impressive display model.

So, does this mean I'm going to re-submit essentially a prettier picture of the same set, and hope to get more than 59 votes? Not quite. I have a couple MOCs in storage that I would like to entertain as vyable ideas for LEGO Idea Sets before I try to submit the Adventure Galleon again.

I would love to see my airship made into an official Lego set, I really, really do. However I also feel a little diversity is more than welcome, especially on a portfolio such as this.

Until the next adventure,

Officially this is the THIRD update on the Adventure Galleon.

Taking count, I have 500 Views on the project, 51 Votes, and 33 Comments. Catznbears gets kudos for participation. :3

However,  Roughly 10% of people who viewed this project voted for it. This is discouraging, and makes me feel very reluctant to share any more photos or in-depth information on the project itself. I will not go into details as to why, at this point it's rampant speculation on my part, but if I hit 100 Votes in the next week, I'll be more motivated/inclined to share and share alike.

As promised, here are photos of the accessories that come with the Adventure Galleon MOC, that fit neatly inside the model itself. 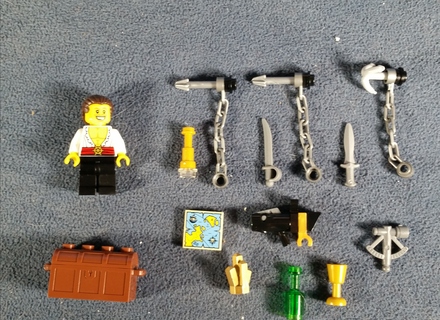 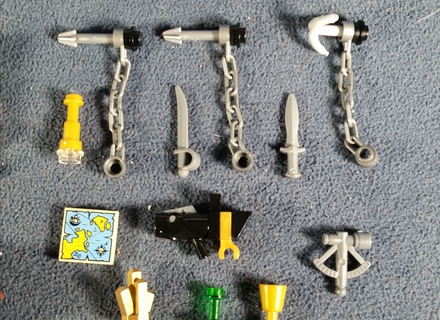 -1 "Brush Sword" (on a similar note, It has come to my attention that new Machete accessories will become available with the Summer 2017 Lego City Jungle Line.)

-1 Sextant (fun fact: a major cause of blindness in Pirates was staring directly into the sun Via Sextant for navigation Hence the eye-patches).

-Preferably, the chains would be Gunmetal, and long enough for them to serve as effective projectiles.

Also Pictured are Captain Fawkes (working name) and a freight chest to store the swords, Sextant, and crystal piece.

Map, bottle and cup sit in a small table in the galleon's cabin, Harpoon rounds sit in a barrel on deck, and the Grappling hook and chain is connected to the stud shooter by the peg on the bottom of the barrel of the stud-shooter.

The chest is stored neatly beneath the balloon on the upper decks of the galleon.

How do I Skull?

As promised in the Skull Update, now you too can Build a skull for any of your Pirate/Anatomy/Skull themed Ideas. 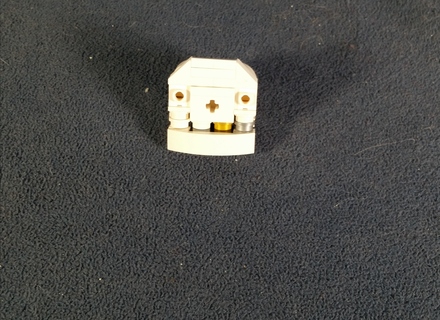 Things of note: All single round stud pieces are the skull's teeth. along with white, I used pearl gold and Gunmetal for fillings. You could even use tan or yellow studs to make the teeth stand out even more!

The black 1X2 tile at the bottom has a 90 degree connection that allows the jaw to fit neatly beneath the skull. 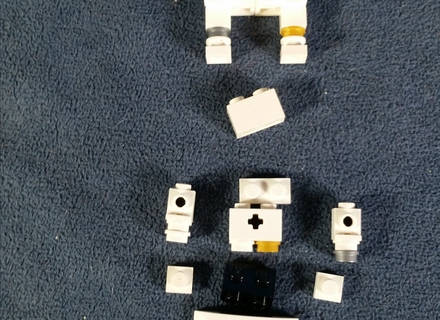 A couple pieces did not make it into frame... Take the two curved pieces with the studs and attach them on either side to the 2x2 slope tile piece.

The solid white 1X2 Brick beneath that acts as the back of the skull. the 1X2 with the Cross shaped indentation and the two "Teeth" on the bottom act as the Skull's nose hole. 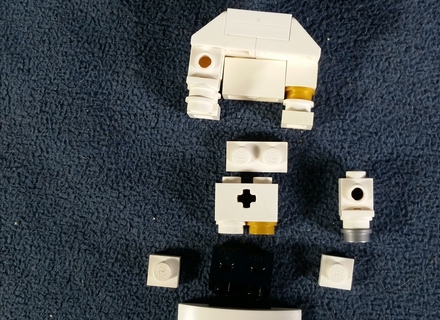 Attach the sharp sloping 1X2 tile pieces to the 1X2 tile at the base of the 2X2 slop piece that serves as the top of the skull. Add eyes, which are special Single stud bricks with an extra stud protruding from the side. They come in two varieties, one with an indent on the side with the extra stud, and one without. Either/or will be sufficient. 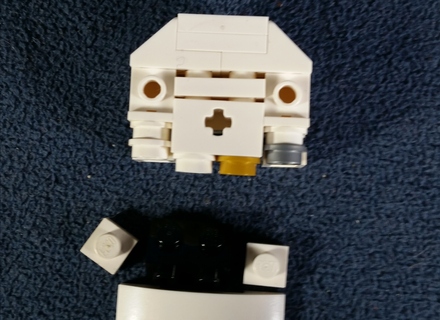 Place another 1X2 tile between the eyes, and add the nose piece. Now it almost looks like a proper brick built skull! 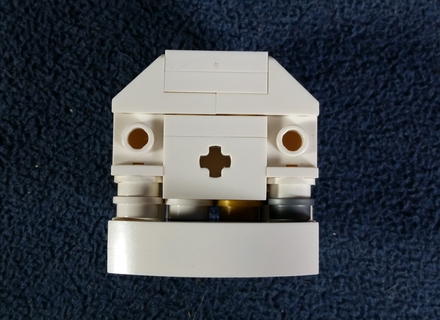 Add two single square stud tiles on either side of the 1X4 Gentle curve tile that serves as a jaw, and attatch the 1X2 black bracket piece to the middle two top teeth, and you have a skull! Another idea worth exploring would be to swap out the white curved piece that makes up the bottom jaw with the same piece but in gunmetal, to give it a more bionic/cyborg look.

I also have enclosed two different variants on the above skull model, with slight modifications that make a world of difference. 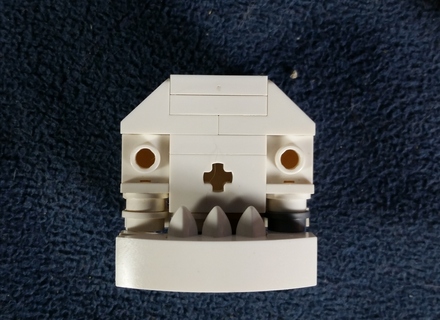 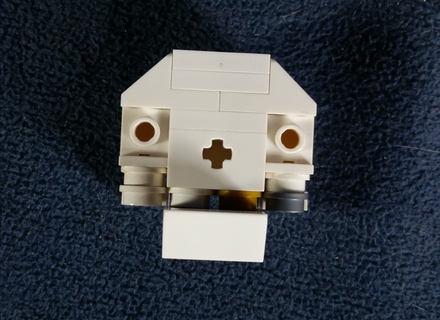 Happy MOC ing, and be sure to Upvote for more updates! Already Upvoted? Tell your friends! Tell your family! Tell your class mates! Co-Workers! Pets!

The last time I did anything with Stop-Motion was back when LEGO introduced the (Steven Spielberg presents) LEGO Studios series of LEGO sets with a Stop-Motion Camera, Software and other things for windows 98. XP, Tops.

I'm very rusty, and out of practice. I tried doing some live-action type thing and... that large, pink, hairy thing in every other frame that resembles a Ham is actually my fat, hairy arm.

On top of this, I had made some extreme revisions to the Adventure Galleon itself, adding more places to store more things for the explorer, and ultimately improving on the overall appearance and aesthetic for the model.

Pictures and the official update will be Thursday. Because of these revisions, I will start over on filming episode 0 of the Adventure Galley.

This update is all about skulls. More specifically, the Skull figurehead on the Adventure Galleon.

Ideally, I would have a specialized white skull element like the one featured below us, 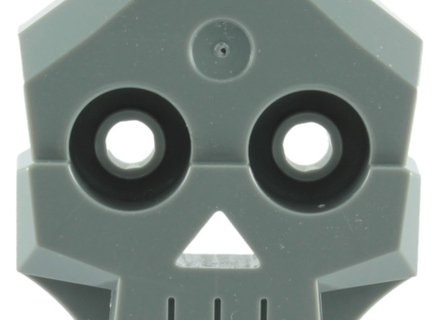 however I lacked the proper horse sense to buy any of the Lego Pirates sets from 2004, with the Bigger Figures, save for one raft with a chrome sword... You know what? they had several cool elements that have since been discontinued... I digress. In a perfect world, I'd have used this piece instead of a Brick Built skull. However, because hindsight, I built a skull. This update will be edited further with instructions on how to build the skull figurehead from the Adventure Galleon as well, along with different revisions of the skull, complete with different lower jaws and pointed teeth even!

(on a related note, I do have this Skull element in Dark Grey... Should I try that instead?)

Also in this update, pictures of an earlier version of the Adventure Galleon. 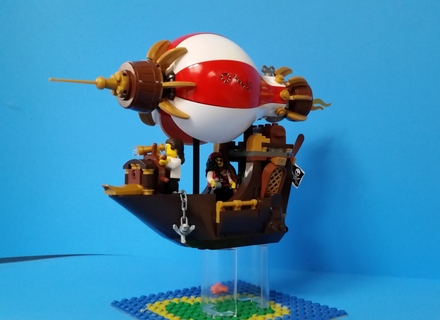 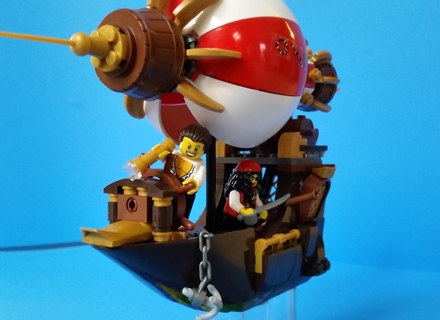 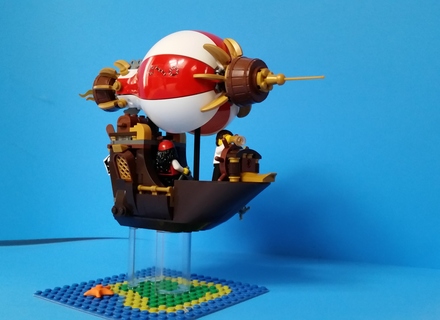 This was prior to me adding the Grappling Gun/Harpoon Launcher Play Feature, as well as a couple of Golden Ornamental Grubels on the upper banisters of the ship. The grappling hook on the chain acts as an anchor/ballast of sorts, and there is the addition of a SECOND Mini-Figure as well, Bonnie Lass, Aka the Pirate Queen from Lego pirate 2015's Treasure Island set. I figured she would be a good travelling companion for my adventuring buccaneer. However, she was removed from the current version of the Adventure Galleon, because the model was too compact for too many characters to sit/stand/pose in it.

But the main thing I want to bring to your attention in these pictures is the special element that I put at the bow of the ship in place of the skull. While I was happy with the part selection at first, I felt that it made the bow rather plain, and exposed the pin element of the navigational wheel at the helm.

But what do you think? Skull or no skull?

Because nobody has used the E-Mail I had provided for feedback, feel free to comment on the project page itself.

Next Official Update is February Second, and I will have pictures of past revisions made to the bow of the Adventure Galleon, Skulls and no.

I've noticed that while views of the project has hit three digit figures, support/up-votes for the project has slowed down over the last two days, but I'm not completely worried about that quite yet. I have T-Minus 55 days to get 57 more up-votes to get an extension on the project. Phenomenal work so far! Thank you to the 43 people who absolutely love this idea so far, and hopefully I'll be able to stomp, shout, and blow enough hot-air to put this blimp in the air, metaphorically speaking.

Working on the Stop-Motion series to commemorate landmark numbers as we speak. I'm not at liberty to say any more right now, and hopefully I'll have finished episode 1 by 100 Votes of support.

There is more I want to share, but I need to pace myself. Until the next update!

Day One Updates and audience interaction

Officially, this is Day One of the "Adventure Galleon" Project.

I'm very excited about this endeavor so far!

I also notice that I can add photos as well... Would anyone be interested in seeing past revisions of the Adventure Galleon as well? Possibly revisions based on Comments/critiques received so far?

How often should I post updates for this project? weekly? Bi-Weekly?

I also dabble in Stop-Motion Animation as well. Would anyone be interested in Commemorating milestones in upvotes with some manner of small (three to five minute) Stop Motion Episode of the Escapades of the Adventure Galleon.

The Adventure Galleon is a Working title for the Model as well. I would be willing to accept any (appropriate) Ideas/Suggestions for names for this dirigible pirate craft as well.

So, that's all I have for day one. Thank you for making me feel welcome here!

EDIT: A private Message option to members, or comments section under updates would be most helpful. Let me see if I can figure out a good way to receive feedback. At the very most, I will open up an E-Mail account exclusively for feedback. Stay tuned.

EDIT 2: For any additional feedback in regards to updates on this project, or any in the future, Send an E-Mail to jevilideas.gmail.com

Next Update will be Thursday, February 2nd.