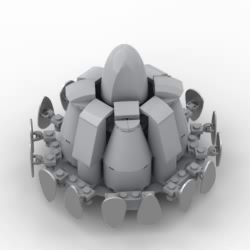 Terrahawks, stay on this channel. This is an emergency!
Tiger Ninestein: Hawkwing, you have a ten-fifty!
Kate Kestrel: Ten-ten!
And with that exchange of codes, Hawkwing catapults into action against Zelda, an ugly, evil android from the planet Guk!  Launching from the Terrahawks' disguised base by generating a whirlpool, Hawkwing is the team's atmospheric interceptor / bomber designed to stop Zelda's Earth Atmosphere Fighters (or ZEAFs) and other threats in their tracks!
Why?
Why do I want you to hit the blue Support button? Terrahawks was unusual in being the first Gerry Anderson show I saw as it was first shown (Thunderbirds and Stingray as repeats, I'm not that old!), and coming out hard on the heels of Star Fleet it filled a gap in my viewing schedule! Although it followed a "monster of the week" sort of theme, the vehicles were classic Anderson series designs and Hawkwing's launch sequence is superb!  You may also remember the noughts and crosses game played out by the Zeroids and Cubes at the end of each episode.  Zelda originally invaded in 2020, so this is the year to watch out for a Terrahawks resurgence - and in fact a new more CGI based version of the show has now been teased, I just hope Hawking doesn't get changed too much!
The Set
The lower interceptor component, armed with particle accelerators, is flown by Captain Kate Kestrel. Lieutenant Hawkeye sits in the gun bay on Hawkwing's detachable wing, in command of the high energy laser cannon and missiles.  When the situation calls for it, Hawkwing can split into two separate craft and in an emergency Hawkeye can eject in his cockpit pod and send the explosive wing crashing into the enemy!
This is a mini-figure scale set with around 650 pieces and mini-figures of Kate Kestrel and Hawkeye featuring flick missile launchers and a rotating stud launcher, similar to the original!  The interceptor has wings that can pull out when it's separated from Hawkeye's wing (shown extended in the images), and his wing also has flexible wing tips to allow for its tunnel launch.  Let's just hope none of Zelda's cubes sneak into the boxes, otherwise we may have to call in the Zeroids for backup!
As I've found myself delving into the worlds of Gerry Anderson again during lockdown, I hope you like this set and the other Anderson Ideas I have running at the moment.  They are:
Eagle Transporter from Space 1999
Stingray
Titan's Terror Fish
and not forgetting the Stardiver!
Thank you! Please support and share!
20
312
days left