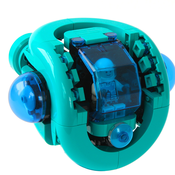 By The Bubble Scout Project
944 comments

Explore the galaxy in these Bubble Scout Ships!
Pilot H and Pilot G are two of the bravest explorers the Federation has ever known. Working together as an inseparable team, they have flown to the farthest reaches of the galaxy in their Bubble Scout ships, discovering distant star systems, retrieving valuable artefacts, and always evading the rogues living on the edge of the Galaxy.
This fun pair of colourful spaceships was a project that got a lot of love on Reddit, Instagram, and Flickr, and when even my loved ones said they wanted one, I knew I had to make it a Lego ideas project!
G and H are mine and my fiancée's initials; so the project has a little personal resonance for me too.
++If this project gets 10,000 votes it has the chance of becoming a real Lego set! Just click support in the box to the right!++
I made these ships using some of my favourite Lego colours.The pilot minifigures are based on space minifigures from my childhood (the Spyrius and Exploriens Droids), and I've referenced the classic and now legendary M:Tron and Blacktron Lego Space themes too. The ships are surprisingly sturdy and have a relatively simple internal structure, despite the complex surface geometry.
Play features:
- Canopies fold open and shut, and pilot can be removed for scouting the surface once the space ships have landed!
- The MT-760 ship has an attachable magnetic pick up function for collecting cargo!
- The B3-290 has attachable grabber-arms for retrieving items!
- Magnetic cargo unit for storing items!
- Fully swooshable!
See the updates tab for recolours - there's a Classic Space version, and other recolours coming soon too! I would love to hear your feedback, so please click that support button, and leave a comment. I look forward to hearing from you, and will respond to as many comments as I can. :)
You can see these photos in high definition and more of my Lego builds on Instagram (@the_brick_artisan) and Flickr (The Brick Artisan)

By The Bubble Scout Project
944 comments