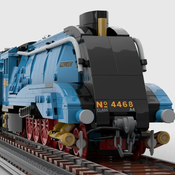 By Stumbledonthebrick
60 comments
I have two passions in life. LEGO and trains (or anything that runs on rails!) LEGO 10194 Emerald Night inspired me to look at what other trains could be made with LEGO, and it got me to thinking about iconic steam trains of the last century and the impact they have had on generations young and old. I believe LEGO Ideas provides an avenue to attract new fans and deliver models that showcase could be worthy of being a display piece as well as functional model.
The A4 Mallard is in my opinion one of the most iconic steam trains to have ever been built (along with the Flying Scotsman and the Big Boy) and would meet this goal.
It is also one of the most challenging to try and capture the essential elements in LEGO. As my first serious 'own creation', I set myself a challenge of trying to build a scale model, suitable for LEGO gauge train track, and with the potential to be motorised. After around 100 hours of trial and error - exploring various combinations of bricks and defining what were the essential characteristics that needed to be captured - I've settled on this model.
There are definitely some complex parts to this model - the front curve, stack and rear of the engine before the cabin have been reworked over and over to try and get as close as possible to the real life thing - it's not perfect but as close as my ability can get.
I've provided studio pictures of the colour (Dark Azure) I believe closely represents the iconic train No 4484 (Dark Azure) as well as alternative colours (Dark Blue, Dark Green, Flat Silver) that were liveries of other trains in the class along with a Dark Red variant simply because I think most things in this colour shine!
I've built this model using only official LEGO pieces that are currently in production - no aftermarket wheels or assemblies - and the train is capable of traversing standard LEGO tracks. Some minor printed parts (or shudder stickers) would be needed to add the finishing touches to this for to be truly complete.