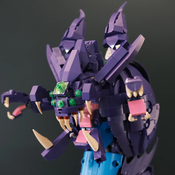 By Hugo Huang
13 comments
B-Robo Kabutack is a Japanese television series which was released by the Toei Company in 1997. As many people's childhood memories, the TV series is very popular among the world. As a crazy fan, I watch the show over and over again for building several impressive characters in it.
The Dodekabutack is Kabutack's ultimate mecha  and it is created with the Star Piece of Sagittarius as countermeasures to TondemoJaws.The moc is created by over 2000 bricks It also can transform from Normal Mode into Super Mode just the same as the prototype in the TV series without moving any LEGO parts. The two modes have wheels at the bottom which enable players to push and play with it easily.
The two modes have different functions! The normal mode Dodekabutack have two robotic arms which can fold and there are movable goggles and water guns on the helmet.
During the super mode, it has two weapons:  the Bilit Scop(the shovel) and the Dodeka Shield(the helmet in normal mode). These two weapons can be held by its two hands.
Expect the Dodekabutack, This project includes three impressive characters: Kabutack(Super mode), Tobimasky,a good friend of Kabutack(also have two modes and can give Kabutack flight capability by uniting togther) and Denden Roller(a snail-like wheel vehicle piloted by Kabutack)
Don't forget Kabutack's accessories! the excavator parts can be united dressed on Kabutack to make it stronger and also can be combined into a excavator.
If the project becomes a LEGO set, the adults will love it by its classic nostalgic style and draw back to their childhood. The kids will be attracted by its moveable joints and the transform function. Hope you like it and please note for it!
There is a video below, hope all of you enjoy it!