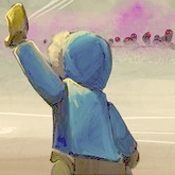 "Crash? Crash! Crash! My battery is fried. Make yourself useful, big brother, and bring an extra battery for me."

Crash Bandicoot has been a videogame icon for over two decades. The orange marsupial jumped, smashed, and spun his way onto the Playstation when I was a kid, and I have loved the character ever since. With the release of the N. Sane Trilogy, an entirely new generation has been introduced to Crash and his wacky adventures. I created this Crash model out of my love for the game, as well as the realization it is cherished by so many other people.

With your support, a brick built Crash Bandicoot could become a reality for fans around the world!

Crash features 27 points of articulation, including a swiveling waist, adjustable ears, and tweakable eyebrows. While Crash is very flexable, he is also quite sturdy. This is thanks to a carefuly selected choice of joint elemenents ranging from socket click hinges to large and small ball joints. The part count for Crash rings up at exactly 800 elements!

I want this to be a growing and improving project. I have some ideas for extra items to go with Crash, and would love to hear your opinion as well. What should I design next to go with Crash? Aku-Aku? Some Crystals? Wumpa Fruit? Crates? An enemy or ridable character?